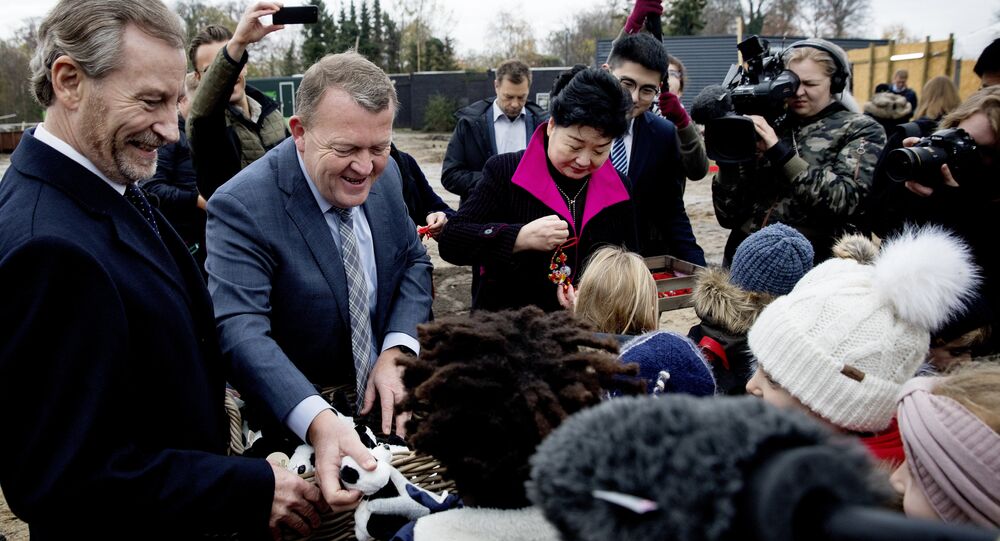 Denmark has received the honor of borrowing Chinese giant pandas as a token of Beijing's favor. Denmark's Prime Minister Lars Løkke Rasmussen has ceremoniously broken ground on the new home for the fluffy ambassadors from China to arrive next year.

China will loan the two giant pandas to Denmark as a demonstration of the good relationship between the two countries.

"We are warmed by the thought that we are today beginning the groundwork for a new panda paradise. This is only possible because so many people have worked so hard for such a long time," Prime Minister Lars Løkke Rasmussen told Danish Radio.

China's new diplomatic outpost was designed by high-profile Danish architect Bjarke Ingels. It will be shaped after the yin and yang symbol and will cost up to DKK 150 million ($24 million).

​The new panda enclosure will be situated at Copenhagen Zoo, replacing a former elephant house. Earlier this year, the decision to demolish the iconic temple-like elephant house triggered strong reactions in Denmark.

© AFP 2020 / MOHD RASFAN
'Pandamonium' Breaks Out in Finland Over Cuddly Loan From China
By Ingels's own admission, he was surprised at how well pandas were actually suited for the Nordic climate.

"The place where the pandas hail from in China has more or less the same climate as [the Copenhagen neighborhood of] Frederiksberg," Ingels said.

The pandas, Mao Sun and He Xing, from Chengdu Panda Base in China, will arrive in Denmark on a loan agreement for ten years with the option of extension.

Two giant #pandas, He Xing and Mao Sun, are moving to @CopenhagenZoo in Denmark. pic.twitter.com/TfAFQk5gTe

​"I hope we can keep the pandas for the duration of their lives," Rasmussen said. He also tweeted that China's two ambassadors will get "the world's coolest abode."

​At present, some twenty countries across the world have received the distinction of borrowing pandas from China. The fact that Copenhagen has joined this club reflects the fact that Denmark is now one of the partners Beijing considers to be most important, researcher Camilla Nørup Sørensen of the Danish Defense Academy suggested.

"There is some prestige attached to it, and it opens doors for Denmark's commercial and financial interests," Nørup Sørensen told Swedish Radio.

© Photo : pixabay
Salmon Says: Norway Sweeps Criticism of China Under Rug to Boost Trade
Danish exports to China have grown markedly over the recent years. At present, Denmark's chief articles of export to China are foods, such as pork and milk, but also mink fur. Additionally, Danish shipping giant Maersk is regarded as a major player in China. The Chinese have also voiced their interest in Danish innovations and alternative energy, having regard to the Nordic nation's leading position on the global wind energy market.

However, Camilla Nørup Sørensen also said that Denmark has been pursuing a policy of greater intimacy toward China since 2008, having markedly toned down its criticism of China.

"So you can safely say that this is a reward for a less critical Danish China policy," Camilla Nørup Sørensen said.

This notion is widely shared by the country's opposition parties, who claim that the pandas are a sign of Denmark's flatness in human rights issues.