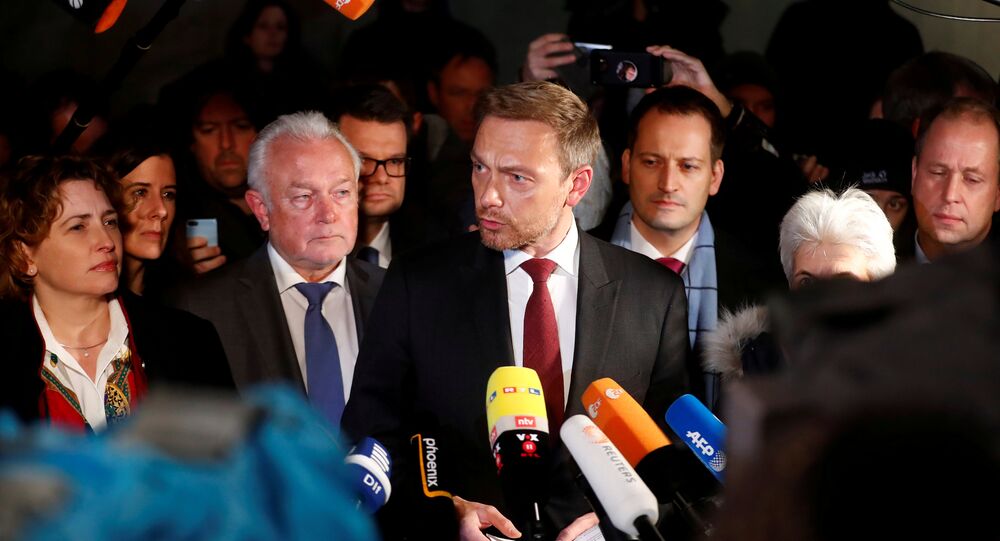 Germany's Free Democratic Party (FDP) has withdrawn from the coalition talks with the union of the Christian Democratic Union of Germany (CDU) and Christian Social Union in Bavaria (CSU), and the Greens.

MOSCOW (Sputnik) — FDP chief Christian Lindner said Monday that the party has withdrawn from the coalition talks with CDU/CSU and the Greens.

"We were chosen to change trends. That could not be achieved [at the coalition talks]," Lindner said.

FDP chief stressed that the party was not blaming anyone for standing up for their principles, but had to do the same with regard to its position.

"It is better not to govern than to govern in a wrong way," Lindner said.

The talks on the creation of the so-called Jamaica coalition have thus fallen through.

German Chancellor Angela Merkel has said she plans to inform German President Frank-Walter Steinmeier about the failure of coalition talks on Monday and to "see what happens."

"Unfortunately we could not complete the exploratory talks. I will inform the president tomorrow, then we will see what happens," Merkel said on Sunday, adding that she regretted FDP's decision and that immigration was an important issue at the negotiations.

The chancellor said that CDU and CSU would stand together at this "difficult time" and would continue leading the country and promoting its unity.

© CC BY-SA 3.0 / Qualle / DeutscheWelle
Germany Hopes Deutsche Welle to Continue Unimpeded Work in Russia - Government
The CDU/CSU bloc could attempt to form a minority government with the Greens. If no government is formed, a new parliamentary election will have to be scheduled.

Juergen Trittin, a member of the Greens and former German Environment Minister, has expressed doubt over a possibility of a minority government with Chancellor Angela Merkel's bloc after the coalition talks with the FDP have failed.

"Germany needs a stable government and that is why the parliamentary majority is necessary. If the [Social Democratic Party] SPD continues to completely rule out the coalition, then I do not know how a minority government can be formed," Trittin told ZDF broadcaster.

© AP Photo / Christian Essler, XCITEPRESS
Germany's AfD Member Calls for Deporting Illegal Migrants to Help Lower Number of Homeless People
Preliminary negotiations on forming a coalition started on October 18. The talks were expected to finish on November 16. However, the disagreements over such issues as migration and climate have prevented parties from reaching a deal.

Mrs. Merkel noted on Thursday, November 16, that the potential coalition partners had "very different positions" on key policy issues but added "I believe it can work." All three parties were keen to avoid fresh elections, fearing it may boost the right-wing Alternative for Germany (AfD) even more. The AfD broke through the five percent threshold to gain their first seats in the Bundestag with their solidly anti-immigration stance.