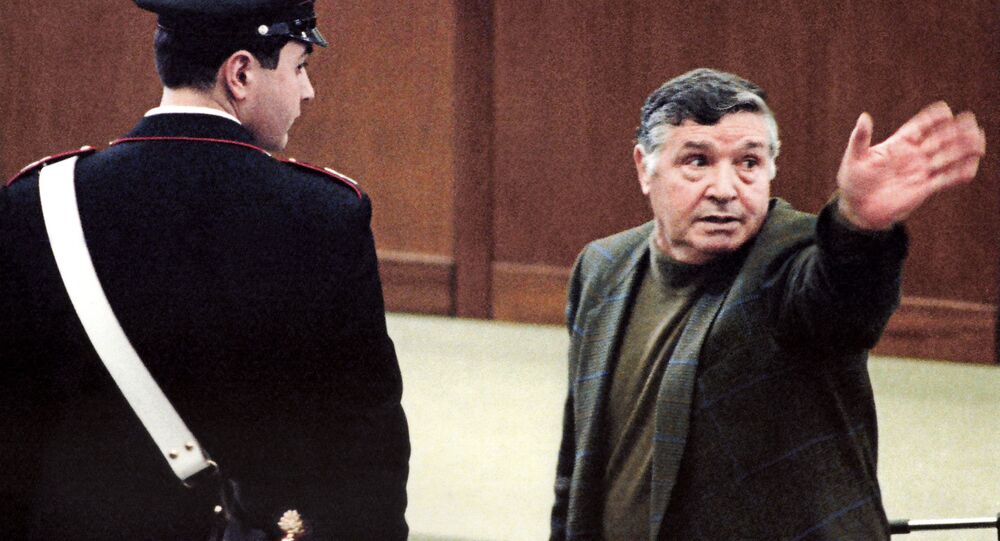 Arrivederci: The Rise and Fall of the Sicilian Mafia 'Beast' Toto Riina

Salvatore 'Toto' Riina, the former boss of the Sicilian Mafia, has died of cancer, aged 87. Sputnik looks back at his life and how the 'boss of bosses' was brought to justice after ordering over a hundred killings.

The former Italian mafia leader, Toto Riina, died in the high security wing of a hospital at 4am on Friday morning, November 17. He was 87. Riina, the former "capo di tutti capi (boss of bosses)" had been in custody since his capture in 1993.

The whole world should be happy because dies today one of the worst mafia leaders of all time. #TotoRiina #vergognaitaliana

Known as La Belva (The Beast), because of his ruthless streak, he had ordered the killing of 150 people.

He had been suffering from cancer for some time and died in the prison wing of a hospital in Parma, northern Italy.

Riina had been jailed for life in absentia in 1991 for contract skimming but was only arrested in the aftermath of the most shocking incidents in modern Italian history.

Backlash Against Killing of Judges

In May 1992 a bomb blew up beside the motorway as Judge Giovanni Falcone was driving from Palermo airport to his home.

The judge, who had been a leading light in prosecuting Mafiosi in Sicily, was killed instantly, as were his wife Francesca and three police officers.

Two months later another anti-mafia judge, Paolo Borsellino, was killed by another car bomb in downtown Palermo, which also claimed the lives of five carabinieri officers.

This was one outrage too many and the Italian state finally reacted to this challenge to its power from Riina and his powerful Corleonesi faction of La Cosa Nostra, which came from the village of Corleone.

A manhunt was launched for Riina, led by 7,000 soldiers sent from the mainland, and the taskforce was kept secret from the Sicilian police, who were believed to have been corrupted by the Mafia and full of Riina's agents.

#TotoRiina Mass murdering mafia pig Salvatore "Toto" Riina aka "The Beast" has died.
RIP to his victims who were murdered trying to protect Italy & its people. Per non dimenticare🕯️ pic.twitter.com/NmbXfG9QJd

​Flushed out of his hideouts Riina had to constantly keep on the move and in January 1993 he was finally captured, unarmed and accompanied by just one bodyguard, at a roadblock in Palermo. He had been a fugitive from justice since 1969.

Giuseppe, who was interviewed in 2012, recalled the day of his father's arrest.

"I had a group of friends who were ignorant of our real name. I spent a lot of time with my brother, Giovanni, on our scooters or at the cafe. I was with him when a friend announced to the group that Toto Riina had finally been arrested. He was so excited, but had no idea he was telling Riina's own sons," said Giuseppe, who spent time in prison and now works for a charity in Padua, helping drug addicts, former prisoners and refugees.

In 2001 Giovanni was jailed for life for four mafia murders committed when he was just 19.

Replaced by 'Bernie The Tractor'

After his arrest Riina was replaced as boss by Bernardo Provenzano, better known as Binnu u Tratturi (Bernie the Tractor), who would himself remain on the run until his capture in April 2006, the day after Silvio Berlusconi won the election.

Salvatore 'Toto' Riina known as the boss of the bosses (italian: il capo dei capi) is finally dead, this were the entire " Cosa Nostra " criminal files at Mafia museum at Corleone visited months ago. pic.twitter.com/WTOb2WbnRU

In his last video interview Borsellino had spoken about possible links between the mafia and wealthy Italian businessmen.

The Sicilian mafia remains a force on the island but its global ambitions are much reduced and it is believed to be considerably less powerful than other Italian organized crime groups, especially the 'Ndrangheta, which comes from the province of Calabria in southern Italy.

Italian Rescuers Find 17 Bodies, Save Over 1,000 Migrants Near Sicily