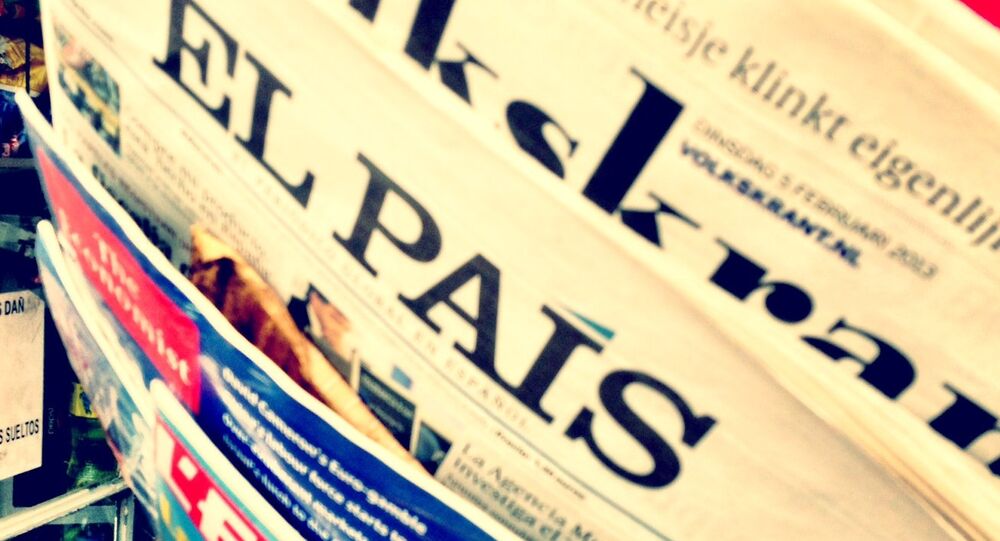 Spanish media outlets regularly distort the truth about Russia and the Russian media; Sputnik Mundo journalist Javier Benitez has put together a selection of material which repudiates claims made in the Spanish daily El Pais about Sputnik and RT's activities in Spain.

Spanish Defense Minister Maria Dolores de Cospedal, who also took part in the meeting in Brussels, was more careful in her assessment; she told reporters that Madrid "doesn't have proof that the Russian government is behind this."

In light of the ministers' meeting in Brussels, Sputnik Mundo has published a short but detailed analysis of how Spain's most popular newspaper, El Pais, has published articles with distorted information about Russian media, as well as outright lies.

In the era of "post-truth" and media wars, methods of manipulating mass consciousness have been perfected to such an extent that has become almost impossible to see and highlight these methods.

In relation to Russia, this situation has reached new heights with the crisis in Catalonia.

Most El Pais articles about Russia, Putin, Sputnik and RT – which at the very least are of doubtful credibility – have been penned by David Alandete, deputy editor-in-chief of the newspaper.

© CC BY-SA 3.0 / FDV / Supreme Court of Spain
Spanish Supreme Court Releases Catalan Parliament Speaker on Bail
Of the 34 articles published since September 22 (a few days before the Catalan referendum), exactly half (17) try to convince the reader in one way or another that there has been some interference in the process by Russia.

Sputnik tried to contact the journalist both via his Twitter account and via the e-mail addresses of several departments of El Pais, which are listed as contacts for the newspaper. However, we have not received an answer.

Faced with such a situation, Sputnik decided to gather a collection of some (but not all) of this journalist's most serious mistakes and inaccuracies.

In today's world, everything can be checked, so it's not so easy to openly lie.

In an article dated November 10 "The EU is fighting the Kremlin propaganda machine," Alandete mentions that Sputnik allegedly published an article on September 21, called "The Balearic Islands have joined the request for independence from Spain." The journalist does not give a link to the mentioned article.

The truth is that the only article Sputnik Mundo published on that day which mentioned the Balearic Islands was published under the title, "Movement for Independence: a Contagious Time Bomb in a Country That Doesn't Want to Listen." Sputnik News websites in other languages didn't publish any articles with a headline remotely reminiscent to the one Alandete writes about.

© CC BY 2.0 / conversacionescones/Álvaro García Fuentes / David Alandete
David Alandete, born in Valencia in 1978, graduated from George Washington University in 2006, where he studied thanks to a Fulbright scholarship.
In the same sentence, again without a link, the journalist accuses the Russian-language news site Vesti.ru of allegedly publishing a report on September 17 with a deliberately false title: "In Catalonia, Spanish is already taught as a foreign language."

The truth is that the report about Catalonia which was published on that day by Vesti.ru was entitled: "PR-War: Madrid and Barcelona are Preparing for a General Battle."

Both examples show that the author has broken two rules of journalism: he didn't check the veracity of the information he had received, and, despite not having the ability to corroborate the information, decided to go ahead and publish it anyway.

The El Pais article says that "the online attacks carried out by Russia in recent months demonstrate a significant increase in the number of campaigns aimed at aggravating the crisis in Catalonia."

If a journalist interprets an article on a web portal as a direct attack against the territorial integrity of Spain, then he should also comment on other articles published by the country's leading media. For example, on September 19, two days before Sputnik, ABC.es wrote, "The Slow Movement of MÉS [More for Majorca, the ruling coalition of the Balearics] Toward Independence is Accelerating.

If that's not enough, it's worth taking a look at the material which El Pais published two days before Sputnik's publication, with the title "The Ruling Party in the Balearic Islands Proposes a Referendum in 2030."

So, what is happening? If Sputnik publishes an article on the growth of separatism in Mallorca, it's a campaign aimed at exacerbating the crisis in Catalonia, but if the situation in Mallorca is mentioned by the Spanish media, including El Pais, then it isn't?

On October 1, the day of the Catalan referendum, El Pais published another article by Alandete which was called "False News and Interference In Catalonia As Well."

The text alleges that behind the wave of Twitter comments about the Catalonia referendum are hiding "interpretations which tally with the vision of the international situation that prevails in Russia."

In this way, again with neither concrete examples nor facts, the author says that Moscow is deliberately pouring oil on the flames on social networks.

It's pointless to argue with the fact that most of the messages on social networks, like in most social media, were devoted to the Catalan referendum. However, from this text it's difficult to understand why the Kremlin was behind it, especially if no evidence was given.

In a similar way, it would have been possible to say, without links or citations, that billionaire George Soros is behind the movement for Catalan independence. That, for instance, is what some other notable Spanish media outlets did, such as La Vanguardia.

In another article, entitled "Putin Encourages Independence By Sending an Envoy to Catalonia," El Pais claims that Dmitry Medoev, who served as the ambassador to Moscow from the Republic of South Ossetia between 2009-2015, is none other than "one of the politicians in Vladimir Putin's circle."

Although the newspaper doesn't try to present any kind of proof, the article gives the impression that the Russian President personally is behind Medoev's visit to Catalonia.

Does that mean that Vladimir Putin is personally behind the actions of every ambassador to Moscow? The article doesn't give an answer.

The journalist refers to Sputnik Mundo's news story, "South Ossetia Opens a Diplomatic Mission in Catalonia", which states that "South Ossetian Foreign Minister Dmitry Medoev arrived in Catalonia on October 23 and held a meeting with fellow citizens living in the Spanish region." It should be obvious that meeting with compatriots abroad is exactly the work that diplomats on duty should be doing, and reporting on these events is exactly the work that the media does.

"This is not a very timely coincidence. Our position is well known. The Catalonia issue is an internal matter for Spain and must be resolved on the basis on Spanish legislation. It is not true that Russia has an interest in encouraging separatist movements in the EU or in Spain. This is part of an anti-Russian campaign carried out by some States," Dmitry Sokolov, a Counsellor of the Russian Embassy in Spain, commented on Medoev's visit to the Spanish newspaper El Indepediente.

But this is not the biggest manipulation of the above-mentioned El Pais article. In another part of the article, Putin's words are distorted. The article presents Putin's words as if to say that "prosperous and long-established states," such as Spain, put their "fragile democracy" at risk by supporting Kosovo's independence.

The truth is that Putin never once uttered the word "Spain" in this context. He spoke in general about the countries that supported the proclamation of Kosovo's independence.

On the contrary, Russia has always been grateful to Madrid, which still does not recognize Kosovo. Putin's accusations were directed against those countries that recognize the independence of Kosovo.

In a September blog post regarding El Pais' coverage of Russia, Thomas S. Harrington, Professor of Hispanic Studies at Trinity College in Hartford, Connecticut, author of Public Intellectuals and Nation Building in the Iberian Peninsula, wrote that blaming Russia is a convenient exercise for many Western journalists.

"I guess that for David Alandete, as the case for so many mainstream journalists, it is much easier (not to mention career-enhancing) to search for Russian phantoms, than to confront, and engage in debate with opinions that are not approved by his corporate bosses and that flout the group-think these bosses now demand in their news rooms," Harrington wrote.

Although for the typical Spanish reader, who is not familiar with the Russian reality, it is very difficult to detect these half-truths and manipulations, it is not so hard for those who read other media outlets and look for alternative opinions.

Despite the fact that the Russian media publishes the same materials as other media outlets do, this article has shown that El Pais is particularly selective towards Russia, trying to question the veracity of Russian media such as Sputnik or RT.