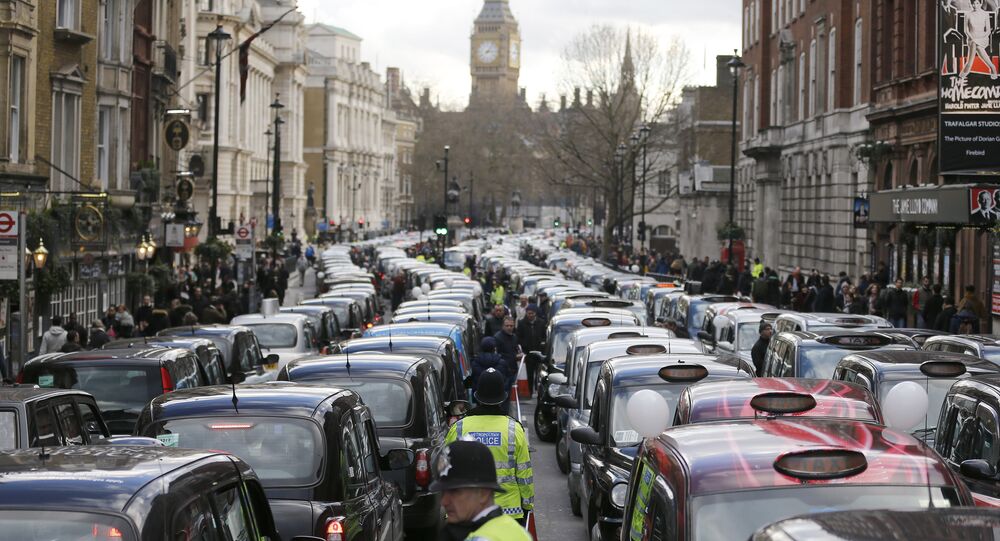 The taxi-hailing app firm Uber has lost its appeal against a landmark UK ruling ordering it to treat its drivers as workers. Cases like this have sparked an upsurge in "gig-economy workers" seeking to unionize, a spokesperson for Independent Workers Union of Great Britain told Sputnik.

The much-lauded "gig economy" centered on apps such as Uber received a blow on November 10 with a judgement from the Employment Appeals Tribunal in the UK determining the drivers of the taxi app to be legally classed as "workers," entitled to receive the minimum wage, holiday pay and paid rest breaks.

© REUTERS / Neil Hall
A photo illustration shows the Uber app logo displayed on a mobile telephone, as it is held up for a posed photograph in central London, Britain August 17, 2016.

Emiliano Mellino of the Independent Workers Union of Great Britain (IWGB) told Sputnik the judgement would make all employers, particularly Uber and others, think twice before denying such benefits to those working for them.

"It is the most high profile case and it is the one that's gone the furthest in the courts — the fight is not over. Each one of these victories is incredibly important in changing the narrative around the 'gig economy.' You never log in to the app and have a half-hour wait. That never happens because there's a bunch of guys circling the blocks desperately waiting for a job," Mr. Mellino told Sputnik.

Mr. Mellino added that the cases against employers such as Uber have sparked an upsurge in "gig economy workers" seeking to unionize.

"Members are joining like crazy! We just launched a branch in Birmingham a week or two ago. There are people desperately calling us up wanting to join. This makes employers in the gig-economy know that if they try to circumvent employment law in the UK, then they will face legal consequences."

© REUTERS / Toby Melville
Uber Lodges Legal Appeal Against Ban on Operating in London
The drivers branch of IWGB, which was formed in June of 2017, supported the two claimants in the case — former Uber drivers Yaseen Aslam and James Farrar.

According to UK employment law, "worker" is an intermediate category between a contractor and an employee who performs most of their duties on behalf of a single company. Unlike an employee, a worker is not entitled to sick pay.

The IWGB has also launched similar cases against Deliveroo, CitySpring and Addison Lee in which it has sought to argue that individuals working as "contractors," in fact qualify as "workers" entitled to greater rights.

Uber has said it will appeal the decision before the High Court, with the case expected to be heard in early 2018.