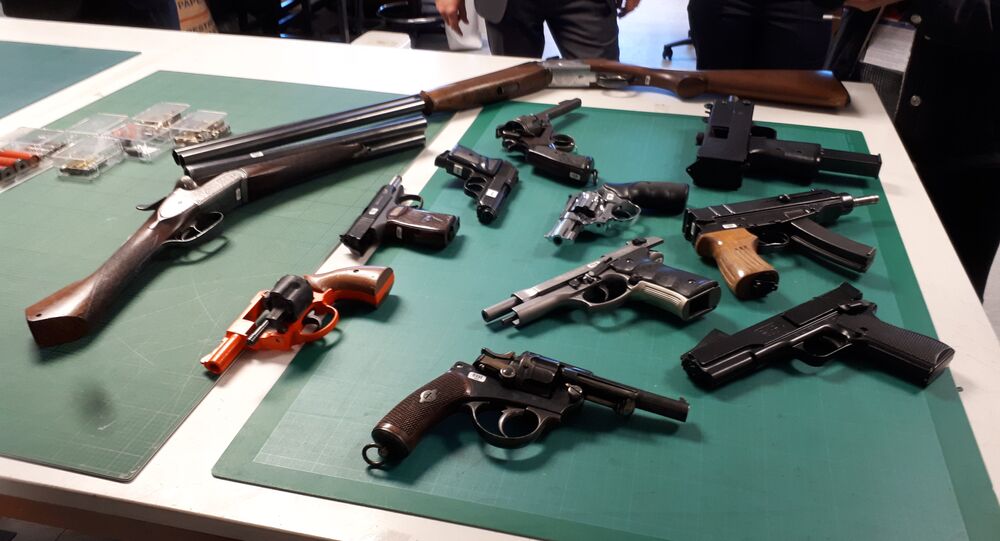 A two-week gun surrender in England and Wales began on November 13, but one senior firearms officer told Sputnik criminals could soon turn to new technology to produce 3D-printed metal guns.

Police in England and Wales have begun a two-week gun surrender in an attempt to reduce the number of firearms on the streets, after a 27 percent rise in gun crime in the UK last year.

Paul Gibbins, the Metropolitan Police's forensic firearms manager, said he feared criminals would resort to new technology to get their hands on weapons.

We're taking part in the national #GiveUpYourGun campaign. From today until 27th November you can hand in any firearm or ammunition anonymously to a local police station, without facing prosecution for the illegal possession, at the point of surrender. pic.twitter.com/ZNITmpaAYg

​​He said 3D-printed guns have not yet surfaced in Britain but he technology is there to print them not just in plastic but also in metal, which is more "robust".

"In future 3D-printed guns are a very real threat. It's a potential threat for the future but we try to keep one step ahead," Mr. Gibbins told Sputnik.

© Sputnik / Chris Summers
A member of the forensic firearms unit shows off one of the 7,500 guns they have stored
Mr. Gibbins warned people not to try printing or testing out 3D-printed guns as they could lose a finger or even a limb.

"Thankfully we have never seen them come to the fore in criminal use but they are putting themselves at great risk," he said.

The parent's of Yusuf Sonko have given their support to this year's @NABIS_UK firearms surrender. The surrender will run for 2 weeks from today (Mon 13 Nov) until Sunday 26 November 2017. https://t.co/402PKh5DZ2 pic.twitter.com/BMVuZQMXCf

​​Commander Jane Gyeford, of the City of London Police, said on Monday, November 13, she hoped people would take advantage of the surrender to hand in weapons which were in their possession.

She said they may be family heirlooms or starting pistols but in the wrong hands, after a burglary, they could end up being used to kill someone.

Gun crime has surged this year, with the latest victim a 26-year-old man, Khalid Abdi Farah, who was shot dead in Southall, west London, in the early hours of Saturday, November 11.

Commander Jim Stokley, of the Trident Gang Command, said 700 guns had been discovered in London this year, which was a record and was up from last year.

not everyone is competent with firearms. So not everyone should have a gun. We can never get rid of guns. We have 3D printed guns now. Bans will do nothing. It’s easy to make a gun if you want one.

In October, Cmdr. Stokley said there was virtually no part of London where gangs were not operating.

Mr. Gibbins said many of the guns used in Britain come from Eastern Europe.

"Getting guns into the country is relatively easy. In places like Kosovo a lot of guns were laid down by militias when the conflict there ended but when money gets tight they try to sell them off to raise some cash," he told Sputnik.

He said intelligence-led operations have smashed a number of gun-running rings, such as the one in Kent which brought in 31 Skorpion sub-machine guns, the same weapon used during the Charlie Hebdo attack in Paris.

The gun surrender is being organized by the UK's National Ballistics Intelligence Service.

Assistant Chief Constable Helen McMillan said police were "realistic" they were "not going to get hardened gang members" surrendering their arms or even those women and teenagers who were sometimes ordered to hide the weapons on behalf of the gangs.

Cmdr. Gyeford said this was a gun surrender, and not an amnesty, and the weapons which were handed in would be forensically tested to see if they had been used in any crimes and individuals would be prosecuted if they were linked to shootings.

A very encouraging start to the national #GunSurrender The public have two weeks to hand in unwanted firearms & ammunition. Help crack gun crime and do your bit for local communities #NABIS @PoliceChiefs @MerseyPolice https://t.co/eirx4D1SZC

On November 13, the Met showed reporters around their forensic firearms unit in a secret location in London, where they have 7,500 seized guns in storage and a database of thousands of bullet casings and shotgun cartridges.

The building has a special firing range and a two-storey ballistics pool where guns are fired into in order to show the unique ballistics footprint of each weapon.