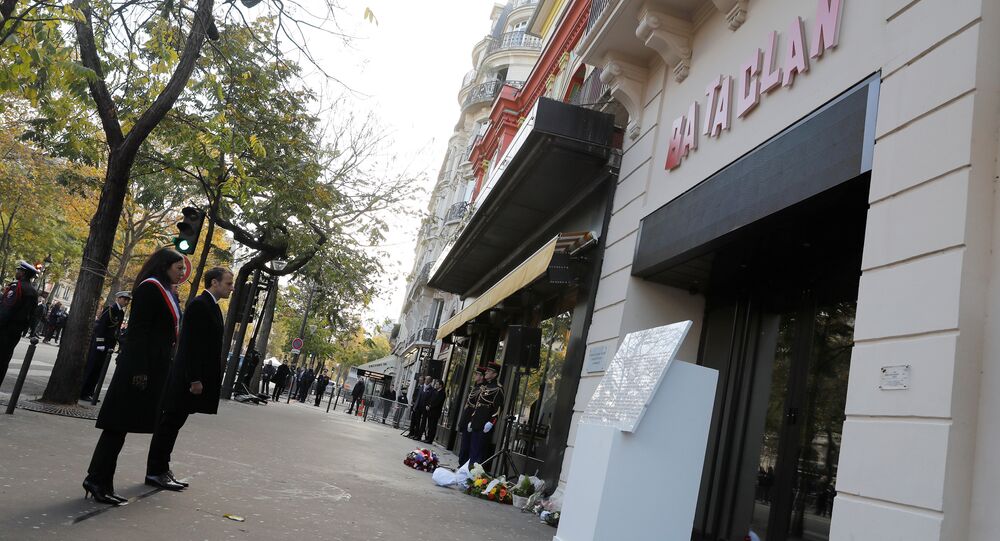 Citizens of Paris hold a vigil for the victims of terrorist attacks that rocked the French capital on this day two years ago.

This Monday, November 13 France mourns the victims of a series of terrorist attacks that occurred across Paris two years ago, claiming the lives of 130 and leaving 413 injured, making it the deadliest attack in France since World War II.

Scores of Parisians have gathered outside the Bataclan concert hall where 90 people were slain during that horrible massacre, holding a vigil for the departed.

French President Emmanuel Macron himself honored the victims of the terrorist act, laying wreaths at the sites of the attacks and offering words of consolation to the families of victims.

© Sputnik
Parisians in front of the Bataclan concert hall. November 13, 2017
© AP Photo / Thibault Camus
Rescue workers help a woman after a shooting, outside the Bataclan theater in Paris, Friday Nov. 13, 2015.

On November 13, 2015 a group of terrorists staged a series of bloody attacks at six locations across Paris.

2 years ago today November 13. Never forget the faces and the lives of those who were killed by jihadists #Bataclan pic.twitter.com/Bu6I2jky57

The terrorists carried out suicide bombings at several venues across the city, including the Bataclan concert hall, followed by an indiscriminate shooting spree, slaughtering scores of innocent civilians.

#Paris two years after the #13Novembre 2015:
The makeshift memorials have disappeared but the country is still very much marked by the terrible attacks on the #Bataclan and nearby restaurants such as this one: pic.twitter.com/u1vORYvszl