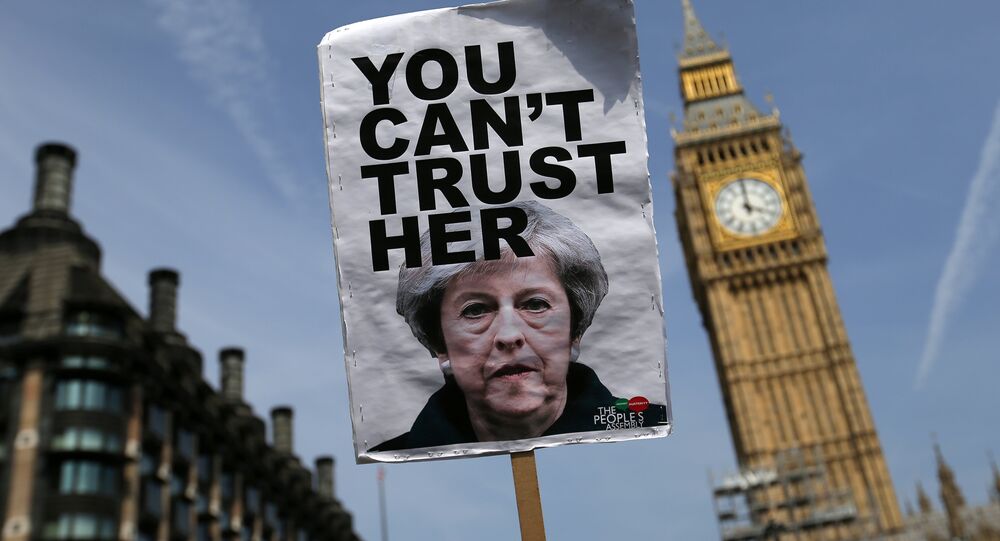 It was once said that a week is a long time in politics, yet in the case of beleaguered British PM Theresa May, it is happening almost every day now.

British Prime Minister Theresa May, instead of firmly focusing on dealing with the biggest political event in UK history for many years — Brexit — has constantly been firefighting a series of scandals that threaten to capsize her government.

© CC0
Manager at UK Parliament Bar Claims She Was Pestered for Sex by 30 MPs
From the sexual misconduct and behavior of MPs, the furor surrounding one of her cabinet minister's secret meetings with Israeli politicians and, then of course, the comments made by her gaffe-prone foreign secretary Boris Johnson, Mrs. May certainly doesn't have her troubles to seek — far less think about the Brexit negotiations.

It begs the question — what is going on, and is Mrs. May's government as unstable as it appears?

With her cabinet having already witnessed two resignations inside a week, the PM is now facing tremendous scrutiny — but all of her own making, according to one political commentator.

© AP Photo / Virginia Mayo
British Prime Minister Theresa May Theresa May speaks during a media conference at an EU summit in Brussels on Friday, Oct. 20, 2017.

Made the Wrong Call

Adam Garrie, a geopolitical expert and managing editor at theduran.com, says Mrs. May's decision to call a snap election has backfired spectacularly and backed her into a hole that appears to be deepening at every turn.

"The short answer is, because the May government does not have a parliamentary majority based on her poor performance in the last election. She has to rely on 10 DUP [Democratic Unionist Party] MPs to even get her a slim majority. Because of that, every scandal to come along has a higher impact than if she had a larger majority that would be more immune to the opposition trying to exploit the scandals in order to bring down the government. By contrast, the Cameron and Blair governments had rather large majorities, making the numerous scandals of that time, less impactful," Mr. Garrie told Sputnik.

The crisis engulfing her government shows no sign of letting up either, with two other cabinet members, Damian Green and Boris Johnson, remaining in the political spotlight.

© AFP 2021 / Stefan Rousseau
British Foreign Secretary Boris Johnson (2R) sits next to British Prime Minister Theresa May (3R) during a meeting of the cabinet at the Prime Minister's country retreat Chequers near the village of Ellesborough in Buckinghamshire, northwest of London, on August 31, 2016.

With unnamed sources lining up by the dozen to muddy the water further, claiming the prime minister lacks authority and backing of her MPs, Mrs. May's government would appear to be on the brink of collapse.

Why Do They Get Await With It?

The public are questioning why British politicians get away with so much these days.

One wrote to the letters page of a national newspaper saying they no longer deserved the title of "honorable members."

"If someone knowingly makes a statement that is untrue they are by definition lying. Unless of course they are an 'honorable' member of Parliament. What is wrong with these people?" one member of the public wrote.

Even former cabinet colleagues are getting in on the act, namely former British chancellor George Osborne, who felt the force of her sword when she was first elected prime minister and forced out of No.11 Downing Street.

Now editor of the London Evening Standard, it is clearly payback time, judging by the intro of the opinion column in the paper on Thursday, November 9, which stated:

"Here's a test for you: what was the last interesting thing the prime minister said? The thing we noticed, that stood out, that took a stand and risked controversy in pursuit of a cause?"

Sonia Sodha, a columnist with The Guardian, is more sympathetic towards the British prime minister and her troubles.

"Lacking in all authority, her government is making absolutely no progress on key issues, from Brexit talks to the impending NHS winter crisis. But there's also no way out for her: she remains in uncomfortable suspended animation, held in place by a split Conservative party that won't let her go for fear of what comes next," she wrote.

© AP Photo / Virginia Mayo
British Prime Minister Theresa May, left, and UK representative to the EU Tim Barrow arrive for an EU summit at the Europa building in Brussels on Thursday, June 22, 2017.

Admitting it was hard to remember a British government so racked by crisis after crisis, Ms. Sodha warned:

"They may yet be more government scalps claimed by the sexual harassment enveloping Westminster.

"But Conservative MPs won't seek to unseat her for now. Who really wants to take over the poisoned chalice of getting Britain through the Brexit talks, only to be blamed for an outcome that cannot keep all Conservatives happy? And at best, the upheaval of a Tory leadership contest won't solve anything; at worst would trigger a general election that delivers Prime Minister Corbyn to No.10."