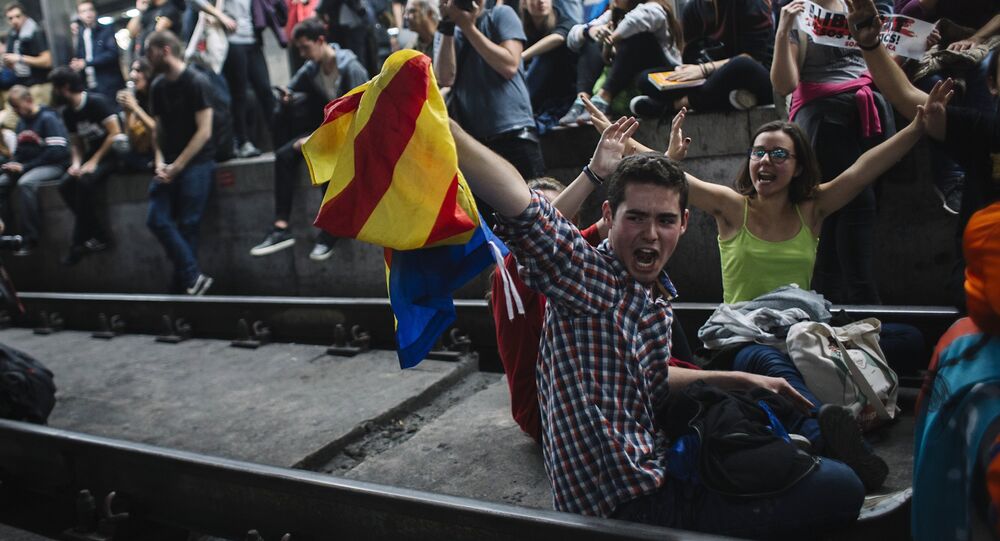 Catalonia's independence bid has influenced all spheres of life in the region.

MADRID (Sputnik) — Approximately 150,000 railway passengers were affected by Wednesday's mass strike in Catalonia, which had been triggered by the arrests of former members of the regional government, a spokesperson for the Renfe railway company told Sputnik on Thursday.

The Catalan National Assembly and Omnium Cultural, large pro-independence organizations, called for a general strike on Wednesday to protest against the detention of several politicians in Madrid and against arrest warrants for former Catalan leader Carles Puigdemont and four other members of the Catalan government, who are all currently in Belgium. The strike was supported by the labor union Intersindical CSC.

"Alternative routes have been organized. People arrived at the Camp de Tarragona station from Barcelona, then went on foot to the Tarragona railway station and from there took ordinary — not high-speed — trains to reach Madrid. Passengers from Figueres were also forced to take ordinary trains to reach Girona," the spokesperson said.

The spokesperson added that the railway traffic had been fully restored by Thursday.

A similar event took place on the same day in Barcelona, where hundreds of protesters rallying against Madrid's decision to arrest former Catalan officials blocked the work of the Sants railway station.

The strikes follow the November 3 European Arrest Warrant issued by Spain for dismissed Catalan President Carles Puigdemont and several other ministers, who had fled to Belgium. They have later turned themselves into the Belgian police and the court will decide on the issue of their extradition to Madrid on November 17.

The tensions have escalated after the October's Catalan parliament's approval of the declaration of independence, which triggered the Spanish authorities to enact article 155 of the constitution, which allows Madrid to impose direct rule over the autonomous region. The Catalan government and parliament were dissolved and snap elections were scheduled for December 21.