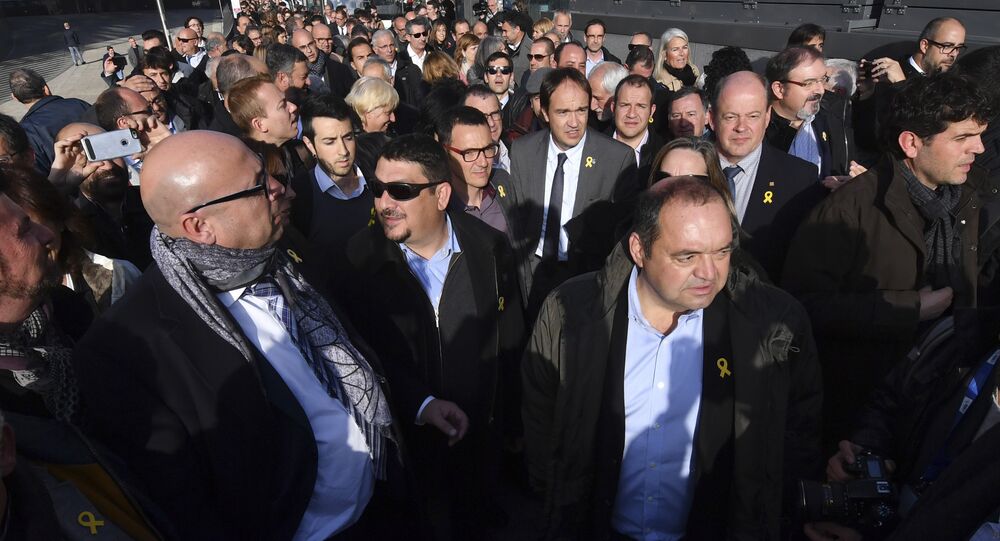 Catalan leader Carles Puigdemont is currently in Brussels waiting for the Belgian authorities' decision on his extradition to Spain after an international arrest warrant was issued.

BRUSSELS (Sputnik) — Up to 200 mayors of different towns of Spain's autonomous region of Catalonia have participated in a rally near the European Commission building in Brussels in support of former Catalan leader Carles Puigdemont and the members of his government.

The organizers of the rally have told Sputnik that it was aimed at showing support to the former members of the Catalan regional government and to express gratitude to the Belgian authorities for their decision to accept people who had left Catalonia.

The rally comes several days after Spain issued a European arrest warrant that was handed to the Belgian prosecutors for Puigdemont and four other ex-ministers, currently in Brussels. The officials are facing charges of organizing an uprising and embezzling state funds.

Puigdemont surrendered to the Belgian authorities, but was later released and is now waiting for Brussels to decide on his extradition to Spain, with the court hearing expected to be held on November 17.

After the Catalan Parliament had voted in favor of secession from Spain, Prime Minister Mariano Rajoy dimissed Puigdemont, who has refused to recognize the dismissal of the government and called for "democratic resistance" after Madrid invoked Article 155 imposing direct rule over the region.