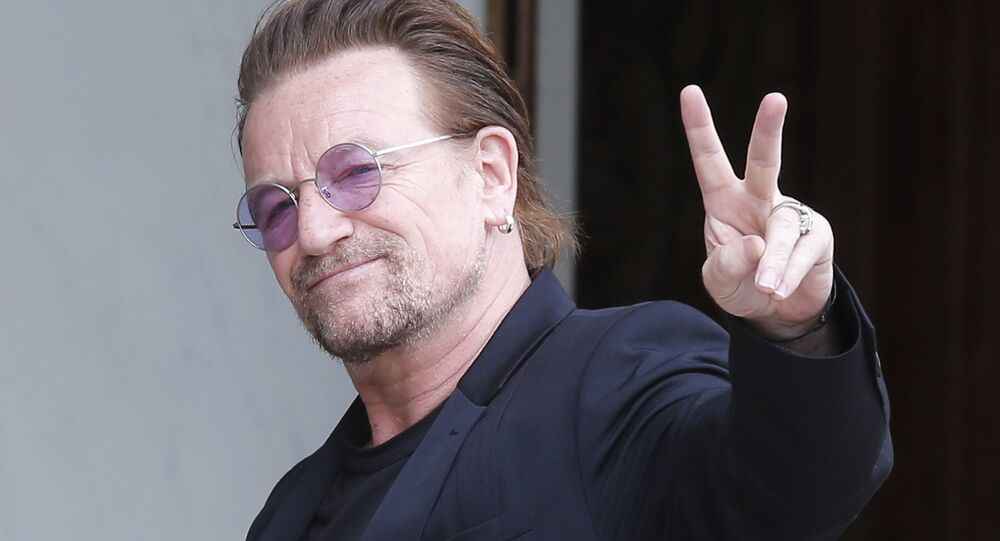 Bono has spoken of his "distress" after leaked documents revealed his investment in a Lithuanian shopping center may have broken tax rules.

U2 frontman Bono says he takes tax avoidance "very seriously" after leaked documents on Sunday, November 5, revealed his investment in a Lithuanian shopping mall may have breached rules, prompting critics to warn he could be seen as the "poster boy for hypocrisy."

© CC BY 2.0 / Trocaire / Campaigners at the IF campaign concert in Belfast Botanic Gardens
Paradise Papers: Over 500 People, Entities in Belgium Mentioned in Leaked Docs
Revelations from a trove of documents nicknamed the Paradise Papers, leaked from a Bermuda-based law firm, Appleby, showed the lead singer of the Irish rock band, U2, had invested in a Maltese company that bought the mall in the Lithuanian city of Utena via a local holding company in 2007.

In a statement issued by the musician, Bono, 57, admitted he was "extremely distressed if even as a passive minority investor… anything less than exemplary done with my name anywhere near it."

The papers show the singer invested in a company called Nude Estates Malta that paid £5.1 million (US$66.9 million) for the shopping center in Utena, northeast Lithuania. Foreign investors in Malta pay five percent tax on profits.

Ownership of the mall was transferred in 2012 to a company called Nude Estates 1, based in Guernsey, where no tax is paid on company profits.

"I've been assured by those running the company that it is fully tax compliant, but if that is not the case I want to know as much as the tax office does, and so I also welcome the audit they have said they will undertake. I take this stuff very seriously. I have campaigned for the beneficial ownership of offshore companies to be made transparent. Indeed, this is why my name is on documents rather than in a trust. The fact is I welcome this reporting. It shouldn't take leaks to understand what's going on where. There should be public registries so that the press and public can see what governments, like Guernsey, already know," the singer added.

© REUTERS / Hannah McKay
Her Majesty's Revenue Service: How Queen Elizabeth Invested in Firm That Targeted Mentally Ill
The enterprise is now under investigation for possible tax avoidance, after allegedly avoided paying £41,500 (US$54,570) in local taxes.

In the wake of his regular campaigns highlighting poverty and greater spending on international aid, the news prompted one financial regulator to suggest he look again closely at his investment or risk having his image tarnished.

"There's a great many businesses which campaign for good and take part in events like Comic Relief and still accept that they should pay their taxes. Bono would do well to reflect on this in the coming days as he risks becoming a poster boy for hypocrisy not rock music," said Paul Monaghan, the chief executive of Fair Tax Mark, that certifies tax paying companies.