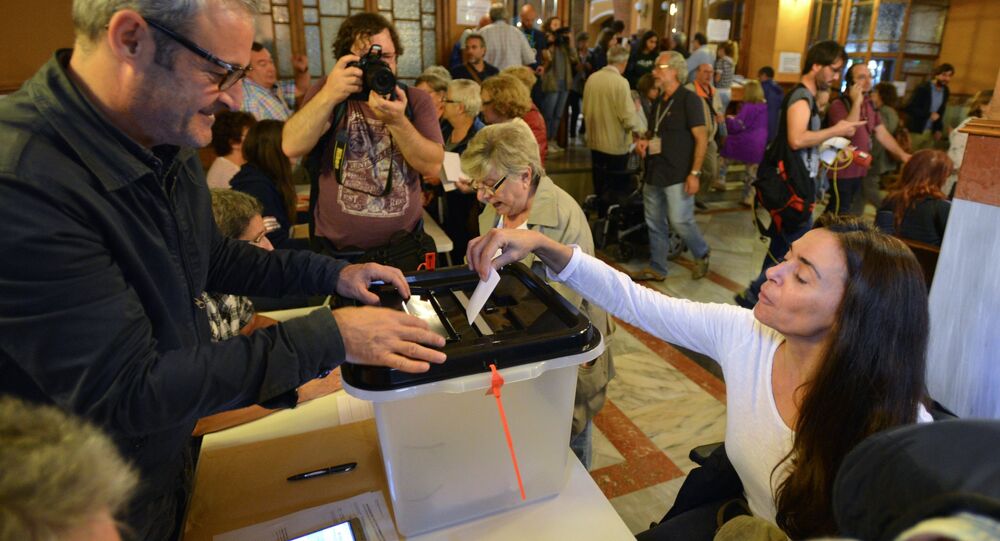 After the Catalan government adopted a resolution on the region's independence from Spain, Madrid introduced the direct governance of Catalonia and set the date for regional elections.

MADRID (Sputnik) – Pro-Catalonia independence parties are on course to win the regional election in December, however, they are unlikely to get an absolute majority in the parliament, a fresh poll showed on Sunday.

According to the results of the GAD3 survey published in La Vanguardia newspaper, the Republican Left of Catalonia headed by Catalan Vice President Oriol Junqueras, who is among the government officials put into custody and accused of organizing an uprising and embezzling state funds, may receive 45-46 seats in the 135-seat Catalan parliament.

Catalan Partido Popular leader Albiol warns that if the pro-independence parties win the elections again, another art. 155 will be applied. https://t.co/lsYJcCBlJL

The Catalan European Democratic Party, with former Catalan President Carles Puigdemont among its leaders, may receive 14-15 seats. The Popular Unity Candidacy, which has not confirmed its participation in the election, may count on 7-8 seats, the poll showed.

READ MORE: All for One, One for All: Catalonia's Incredible Gravity-Defying 'Human Towers'

In total, Catalan pro-independence parties may receive between 66 and 69 seats, however, at least 68 seats are needed for absolute majority.

According to #GAD3Survey published in #lavanguardia pro-independence #Catalan parties #ERC #PDeCAT #CUP would take between 66 and 69 seats?

In the parliament, which was formed following the 2015 election and which proclaimed the independence of Catalonia, nationalists had an absolute majority — 72 mandates.

According to the poll, the overwhelming majority of respondents believe that the beginning of legal proceedings against the former Catalan leadership is unjustified, 59 percent consider that taking judicial actions against Puigdemont is an excessive measure, while 35.3 percent consider them adequate.

On Friday, Belgian prosecutors confirmed that they had received a European arrest warrant for Puigdemont and four other ex-members of the Catalan government, issued by the Spanish court.

Puigdemont and other former Generalitat members are facing charges of sedition, rebellion and misuse of state funds. The Spanish court has also issued both national and international warrants, which will be handed to Spain's national police and the Interpol.

Earlier, a Spanish court ordered to put eight former members of the Catalan government into custody without the possibility of bail. They are accused of organizing an uprising and embezzling state funds. Puigdemont as well as four ex-ministers are currently in Belgium and did not appear before the court.

Madrid dissolved the Catalan government and called a snap parliamentary election on December 21.