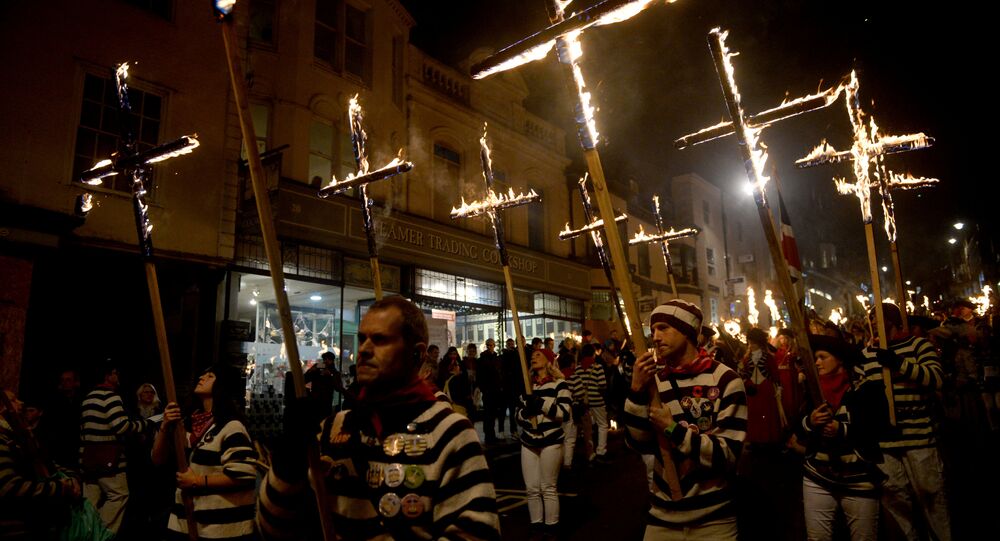 The US movie mogul, who was recently marred in a sex scandal, the British Prime Minister and North Korea's "Little Rocket Man," as he was dubbed by Donald Trump, were chosen as this year's celebrity villains to be set alight at the annual British Bonfire Night.

The 10-meter-high wooden image of the US sex scandal producer Weinstein, clutching an Oscar, was the center of this year's Guy Fawkes Night celebrations in the UK.

​Thousands of Bonfire Night revelers marched through the streets to mark the annual event.

​A giant effigy of Theresa May dressed in traditional Roman dress was also paraded through the streets in Lewes, East Sussex.

On the eve of bonfire night in Lewes Kim Jong-un is going to feel the heat #bonfire#warmth#rocket pic.twitter.com/cmmRgz3qhz

​North Korean leader Kim Jong-Un, surrounded by people dressed up as nuclear waste disposal workers, was another highlight of this year's bonfire.

© REUTERS / ary Turner
An effigy of North Korean leader Kim Jong Un is paraded through the streets before being set alight during Bonfire Night celebrations in Lewes, Britain November 4, 2017

British Bonfire Night, which falls on November 5, is a historic event which commemorates the failure of the November 1605 Gunpowder Plot; a group of English Catholic radicals had intended to assassinate King James I  and his ministers by blowing up the Palace of Westminster during the state opening of Parliament.

If you've ever wondered what on earth Bonfire Night is all about, here is the story behind Guy Fawkes… https://t.co/2Lv7uSd5wi pic.twitter.com/G3UxpzuDOY

​Guy Fawkes, a member of the Gunpowder Plot who was supposed to guard the explosives, was arrested, and the King survived the attempt on his life. He was hung for his crime the following January.

When Fawkes' crime was discovered, Londoners lit bonfires where they burned effigies of the notorious would-be terrorist, which went on to become a British tradition.