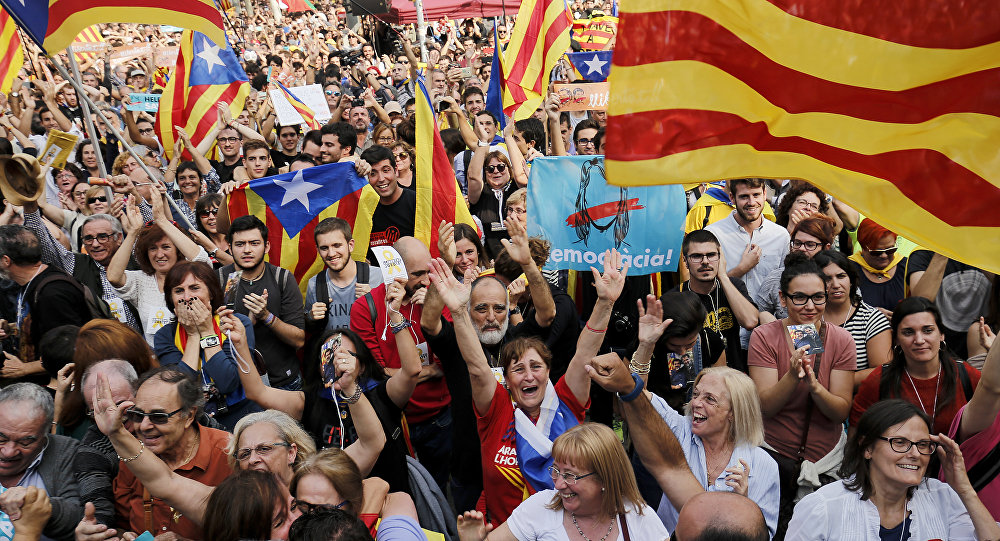 Jordi Sole, a Member of the European Parliament and the Republican Left of Catalonia, has commented to Sputnik on the unfolding events in Spain in the wake of the Catalan referendum on independence.

Nine Catalan ministers were arrested in Spain on Thursday in connection with the referendum. However, one of them, Santi Vila, was freed on bail on Friday.

"Putting politicians in jail for organizing a legitimate vote (desired by around 80% of Catalans) only proves the weakness of the Spanish democracy's pillars. Unfortunately, this aggressive reaction is a pattern of Spanish-Catalans relations," Jordi Sole, a Member of the European Parliament and the Republican Left of Catalonia, told Sputnik on Friday.

Moreover, Sole questioned whether Spain had any legal grounds for the Catalan officials' arrest, over facilitating the autonomous region’s referendum.

© REUTERS / Gonzalo Fuentes
Catalonia Should Remain Part of Spain - Spanish FM
Meanwhile, since the arrests of Catalan officials, a Spanish court has issued an international arrest warrant on Thursday for former Catalan President Carles Puigdemont, who is currently in Belgium.

The Spanish Prosecutor’s Office asked a court to place under arrest eight former members of the Catalan government without the right to bail, only releasing on bail the Catalan government’s former business adviser, Santi Vila, who resigned before Catalonia’s proclamation of independence. The officials are charged with rebellion, sedition, and the misuse of public funds.

Since the arrests of Catalan officials, a Spanish court has issued an international arrest warrant on Thursday for former Catalan President Carles Puigdemont, who is currently in Belgium.

All for One, One for All: Catalonia's Incredible Gravity-Defying 'Human Towers'