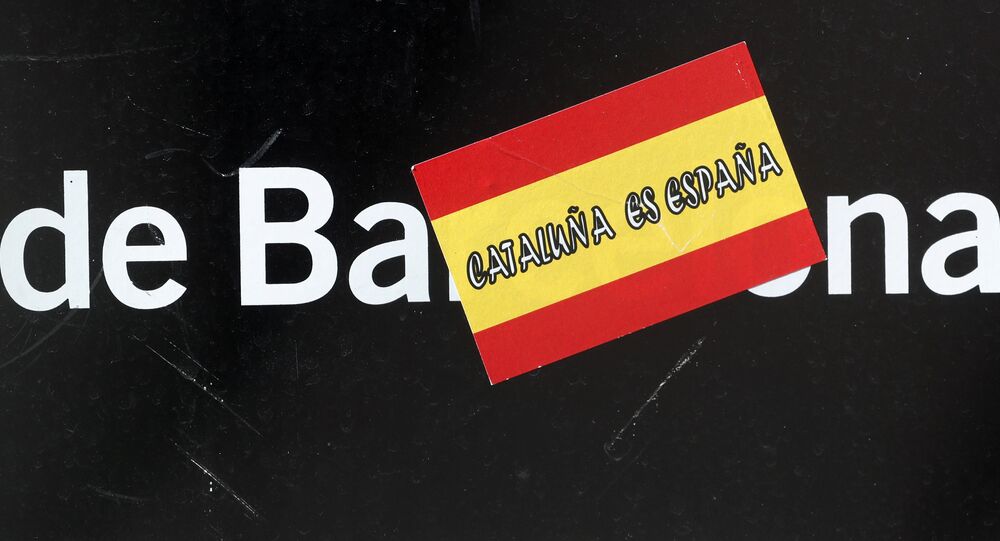 Catalonia declared independence on October 27, but four days later no country has recognized the new nation and the Spanish government has suspended the region's autonomy. Sputnik looks at some other territories where "independence" did not quite go as planned.

After weeks of tension, Catalonia formally declared independence on Friday, October 27, only for the Spanish government to ignore it and then suspended the region's autonomous powers, imposing direct rule from Madrid.

© AFP 2020 / PIERRE-PHILIPPE MARCOU
A student holds a Catalan pro-independence 'Estelada' flag during a protest in Barcelona on October 2, 2017 a day after hundreds were injured in a police crackdown during Catalonia's banned independence referendum

Catalonia has not been formally recognized by any other country yet. The pages of recent history are littered with "nations" which struggled to gain recognition.

The Turkish Republic of Northern Cyprus

In 1960 the island of Cyprus became independent from the British Empire, but ethnic tensions between Greek Cypriots and Turkish Cypriots undermined the state's ability to function.

In 1974, after a military coup by Greek Cypriot nationalists who wanted to unify the island with Greece, the Turkish Army invaded to protect Turkish Cypriots.

After a UN-brokered ceasefire the Turkish Cypriots formed their own de facto state in the north, while the Greek Cypriot-dominated Republic of Cyprus retained the rest of the island.

© AFP 2020 / Behrouz Mehri
A couple walk through the buffer zone as they cross from the Turkish-controlled northern Nicosia to the Greek side of the Cypriot capital via Paphos Gate pedestrian border crossing on June 28, 2012.

On November 15, 1983, the Turkish Cypriot leader Rauf Denktash formally declared the Turkish Republic of Northern Cyprus (TRNC) as an independent state. Its flag was virtually the Turkish flag with the red and white colors reversed — only Turkey recognized it.

Almost 34 years later that is still the case.

Somalia is universally considered to be a "failed state" and the huge bomb which went off in the capital, Mogadishu, recently highlighted the state's inability to protect its citizens from the Islamists of al-Shabaab.

But in the north an entirely separate country exists, which 35 countries have recognized — Somaliland.

This is the somaliland that we love so much, We should always cherish the peace and stability we are enjoying our nation’s developments pic.twitter.com/JPQOUjmMZX

Somalia had always been a country of clans and tribes which had been held together by the powerful personality of dictator Siad Barre.

It was also an awkward shape, with the Ethiopian-controlled Ogaden, jutting out and separating the two halves.

So when Barre was ousted in 1991 it was not surprising that Somaliland — a former British protectorate in the north — made a unilateral declaration of independence from Somalia.

Somalia was too weak to attempt to reconquer Somaliland, and for the past 26 years the two countries have got along uneasily, with another state, Puntland, bubbling up in 1998 on the Horn of Africa.

We were honored to have #Puntland's President Gaas give closing remarks at #Somalia Fisheries Forum. @Shuraako pic.twitter.com/sJSMl0IOLh

Puntland says it simply wants to be an autonomous region of a federal Somalia, rather than a fully-fledged state.

Somaliland, with its capital in Hargeisa, muddles along largely on remittances from Somalilanders in the UK, US and Canada, and its economy is actually doing better than Somalia and many other African nations.

Situated on the eastern edge of the Black Sea, sandwiched between Russia and Georgia, the Abkhazian people have always lived on the edge.

In 1991, when Georgia declared independence from the Soviet Union, the Abkhazians felt ill at ease under the domination of Tbilisi and soon tried to break away themselves.

A short but bloody war in 1992/3 ended with the Georgians retreating. But a decade later, the Georgians again tried to impose their rule on the territory.

This time Russia formally recognized Abkhazia's independence and began to invest in its economy and infrastructure.

In August, Russian President Vladimir Putin visited Abkhazia and promised to maintain Russian support for its independence from Georgia. But it is not recognized by many countries.

In 1975, after the death of Spanish dictator Francisco Franco, the Moroccans took advantage of Madrid's weakness and sent thousands of its citizens south, across the border into what had been the Spanish Sahara.

It was known as the "Green March," and it enabled King Hassan II to effectively annex the huge desert territory even before the Spanish had formally announced they were leaving or granting it independence.

But the indigenous people of the area, the Sahrawis, resented Moroccan rule just as much as they had resented Spanish occupation.

The Polisario Front fought a long guerrilla war against the Moroccans, which ended in a ceasefire in 1991.

Morocco continues to rule the Western Sahara but the Polisario Front has declared a Sahrawi Arab Democratic Republic (SADR), which rules a strip of land in the east, along the border with Mauritania.

The SADR is recognized by Algeria, Mauritania, Iran, Mexico, South Africa and a number of other African countries, but diplomatic pressure from Morocco has prevented the US, Russia, China, Britain or France recognizing it.

Another consequence of the collapse of the Soviet Union was the war between Armenia and Azerbaijan over the Nagorno-Karabakh region.

Nagorno-Karabakh was an enclave in Azerbaijan with an overwhelmingly Armenian population.

© REUTERS / Staff
A tank of the self-defense army of Nagorno-Karabakh moves on the road in the village of Talish April 6, 2016

When Azerbaijan declared its independence in 1991, Nagorno-Karabakh sought to break away and got the backing of its ethnic brothers in neighboring Armenia.

After a brief but bloody conflict in 1994, Nagorno-Karabakh remained in Armenian hands, as did a strip of territory which "united" it with Armenia.

In 2016 fresh violence erupted in Nagorno-Karabakh with the Azeris accused of trying to invade. After multiple casualties the two sides signed a Russian-brokered ceasefire.

The Armenians have threatened to recognize the independence of Nagorno-Karabakh, which earlier this year changed its name to Artsakh.

Probably the most successful of the nations to declare independence in recent years has been Kosovo, partly for geopolitical reasons.

How would #Spain respond if major countries began arming secessionists in #Catalonia and provided them with an air force? #Kosovo #Serbia

​For years Kosovo had been part of Serbia, but when Yugoslavia collapsed in the early 1990s the ethnic Albanian majority in Kosovo began pulling at Belgrade's chains.

The area had huge cultural significance for the Serbs because in 1389 an army led by Prince Lazar Hrebeljanovic suffered horrific casualties during a grisly battle with the invading Ottoman Turks.

By 1990 the ethnic Serbs were a minority in Kosovo and the rebel Kosovo Liberation Army (KLA) took up arms and was supported by the West, which bombed Belgrade before allowing a de facto Kosovan state to be set up.

© AFP 2020 / Armend NIMANI
People wave flags and carry banners as they gather in Pristina on February 17, 2017 during the celebrations marking the 9th anniversary of Kosovo's declaration of independence

In 2008, Kosovo formally declared independence and was swiftly recognized by several western nations.

Serbia, Russia and several other countries continue to withhold recognition.

The Kosovan President recently asked Albania to give Kosovans citizenship, echoing fears many Serbs have that the ultimate plan is to create a Greater Albania.