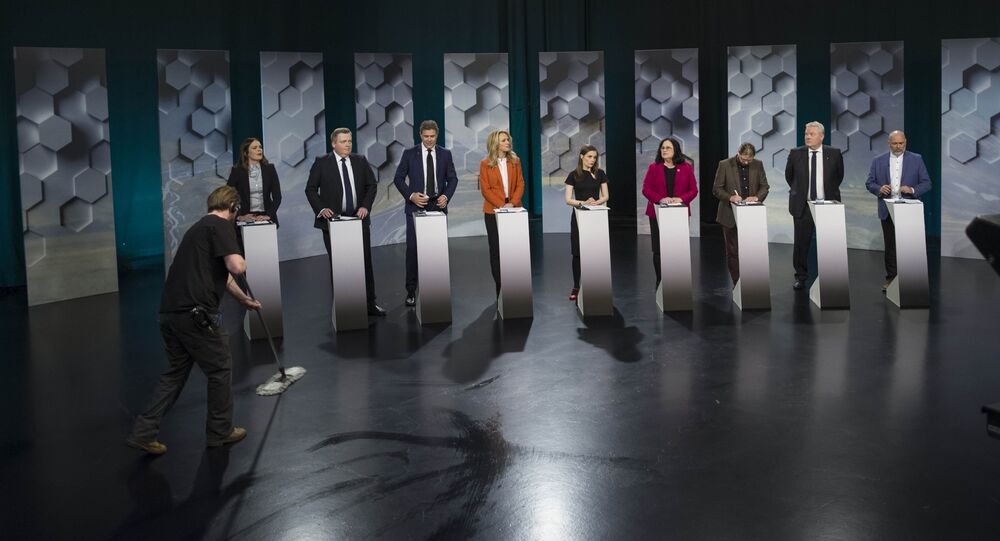 Icelanders' confidence in their government has reached rock bottom amid a streak of scandals eclipsing one another. The recent out-of-turn general election has yielded an intricate political map for the tiny Nordic island nation, with complicated government talks between a record number of parties.

After Saturday's snap general election, Icelanders woke up to a whole new different political landscape. While the three center-right coalition parties lost their majority in Iceland's 63-member strong parliament, the opposition parties together only managed to gain one of the vacant seats. Instead, two new contestants have entered the Nordic nation's political scene.

The new session of Althing, the Icelandic parliament, will thus be made up of eight political parties, which is more than ever before. This new configuration has stirred up fears regarding the country's political life. The previous coalition, under much clearer circumstances, took almost three months to be formed.

© REUTERS / Geirix
How 'Good Heart' and 'Rich Wife' Felled Two Consecutive Icelandic Gov'ts
The snap election was held after revelations that Prime Minister Bjarni Benediktsson's father had signed a letter of recommendation for a convicted pedophile, a practice quaintly called "restoring one's honor" in Iceland. Allegations that Benediktsson had deliberately hushed up this information to prevent it from slipping into the hands of the press and the public ultimately led to the dissolution of the government. Rather than attempting to form a new coalition government, parliament opted to hold snap elections instead.

The election itself didn't go off smoothly either. A local newspaper, Stundin was slapped with a controversial injunction legally preventing it from reporting on Bjarni Benediktsson's financial activities shortly before the 2008 crash, a move many Icelanders perceived as an encroachment upon freedom of speech.

​The Bright Future party, which had previously left the ruling coalition, effectively triggering the elections, lost all its seats in the aftermath. The right-of-center Independence Party, led by Benediktsson, managed to retain its position as the country's largest, yet had its share of votes reduced to 25.5 percent. Despite the outcome, Benediktsson has reason to celebrate, as previous polls indicated only 15 percent support in the alliance, the local news outlet Iceland Monitor reported.

Iceland's next largest party, the Left-Green Movement led by former Education Minister Katrín Jakobsdóttir, garnered only 16.9 percent of the votes, despite polling near 30 percent earlier this month.

© AP Photo / Frank Augstein
Iceland in Disarray Over Pedophile Scandal but Otherwise 'Winning in Many Ways'
The Social Democratic Alliance, which was Iceland's largest party in the decade between 1999 and 2009, when it received about 30 percent, finished third with 12.1 percent.

The most impressive result, however, was achieved by the rookie Center Party founded by former Prime Minister Sigmundur Davíð Gunnlaugsson. This is all the more surprising given that Gunnlaugsson was forced to step down as Iceland's Prime Minister amid the Panama Papers scandal and was consequently ousted as the Progressive Party's leader.

Yet another newcomer to parliament is the so-called People's Party with their rallying cries against immigration, poverty and corruption. The party finally managed to crack the 5 percent barrier after failing to do so in 2016.

© CC0
Narrow Escape? Iceland Bracing for New Financial Crisis
By contrast, Iceland's Pirate Party, which became an international media darling after having long polled as the country's largest, lost almost a third of its electoral support and had its parliamentary faction shrink to 9.2 percent.

Saturday's vote was the Nordic country's second snap election in a single year, following scandals involving pedophiles, tax havens utilized by high-ranking government officials and mass protests of historic proportions. The Nordic nation of only 330,000 was also among those hit hardest by the international banking crisis in 2008, which was one of the worst disasters in the country's history resulting in 5,000 Icelanders emigrating from the island.

​Despite the fact that the Icelandic economy now appears to be on the mend, with tourism reaching record heights, Icelanders are still left with a feeling of profound distrust for their politicians.

​"There have been a lot of scandals and power is corrupt. I do not really trust politicians," clothing store attendant Ragnheidur Robertsdottir from Reykjavik told Finnish national broadcaster Yle.

"Even if the economy has recovered, the confidence in politicians hasn't," political scientist Eva Önnudottir of the University of Iceland said.