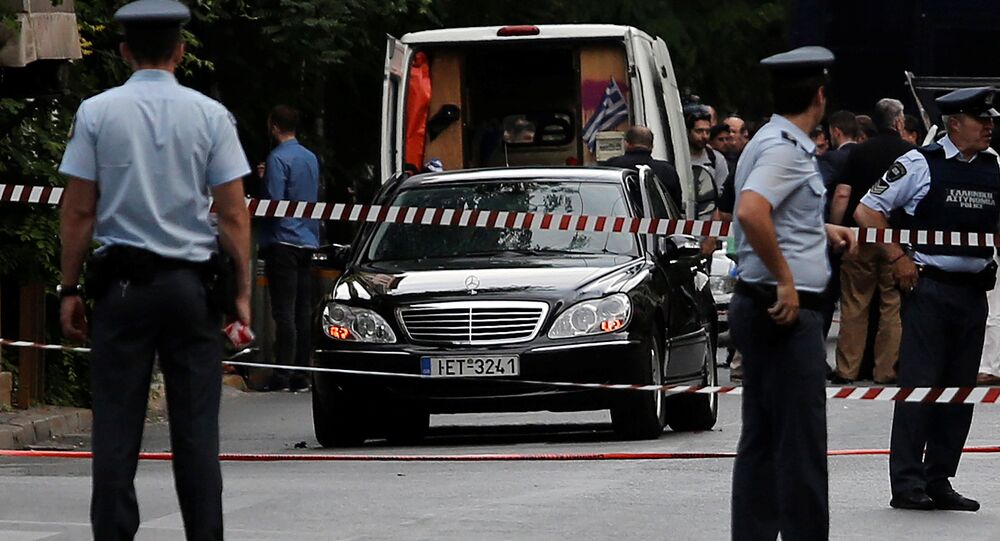 Former Prime Minister of Greece Lucas Papademos was seriously injured earlier this year by a parcel bomb which was sent to him. The investigation into the incident has shown that a Greek radical anarchist group could have attacked him for his economic policies while in office.

ATHENS (Sputnik) — Greek police have arrested a suspect who is believed to have sent a letter bomb to Papademos on May 25, 2017, local media reported Saturday.

© REUTERS / Stringer
Another Blast Hits Southern China After Series of Parcel Bomb Explosions
The 29-year-old detainee is linked to an anarchist group, the Conspiracy of Cells of Fire (CCF), also known as Conspiracy of Fire Nuclei. The man had been detained on previous occasions for organizing riots at a university where many anarchist organizations are located, the newspaper Proto Thema reported.

He is reportedly also suspected of having a connection to the preparation of letter bombs sent in March to German Finance Minister Wolfgang Schaeuble, the International Monetary Fund (IMF) and to EU institutions. One of these letters injured a secretary at the IMF office in Paris.

The attack on Papademos is likely connected with the austerity measures, which he accepted to ensure a bailout package from international creditors in 2011 when Greece was on the brink of a financial disaster.

© AP Photo / Thanassis Stavrakis
Anarchists Storm Greek National TV Broadcaster's Headquarters
The CCF is a radical far-left group which was established in Greece in 2008. The organization promotes anarchist ideas and wages war against the state and its institutions. It has committed series of attacks on political and financial organizations as well as some companies. In their struggle to wreak havoc, the anarchists mostly use arson and mail bombings.

In 2010, amid the anarchists' nonlethal bomb attacks on prominent European leaders, Greek authorities even had to shut down the mail service in the country. Among the terrorists' targets were embassies, Europol as well as the offices of German Chancellor Angela Merkel and then Italian Prime Minister Silvio Berlusconi.

The Only Anarchist Revolution in History

Who Will Lead the Resistance: Anarchists, Socialists or Democrats?