Amid mounting tensions in the Spanish constitutional crisis, the international community has been reacting to the Catalonian push for independence followed by the decision of the central government to strip the rebellious region of its autonomy.

Germany claimed it would not recognize the Catalan declaration of independence. Government spokesperson Steffen Seibert said that Berlin was concerned about the situation in Spain since Catalonia violated the principles of sovereignty and territorial integrity enshrined in the Spanish Constitution. He also expressed support for the vow of Spain's Prime Minister Mariano Rajoy to restore constitutional order in the country.

The US State Department issued a statement, which reads that the US stands for the integrity of Spain and supports the efforts of the central government to prevent Catalonia's breakaway.

French President Emmanuel Macron, who is currently on a trip to French Guiana in South America, told reporters that Spanish Prime Minister Mariano Rajoy had his "full support" in enforcing the rule of law in Catalonia as Madrid.

President of the European Commission Jean-Claude Juncker, who was accompanying the French President, warned of "splits" and "fractures" within the European Union.

Prime Minister of Belgium Charles Michel called for a peaceful settlement of the political crisis in Spain "with respect for national and international order".

A political crisis can only be solved through dialogue. We call for a peaceful solution with respect for national and international order

The spokesman of UK Prime Minister Theresa May said that Britain would not recognize the unilateral independence declaration since the referendum was deemed illegal by the Spanish court.

You guys know how that feels huh? https://t.co/5TFBzGinHg 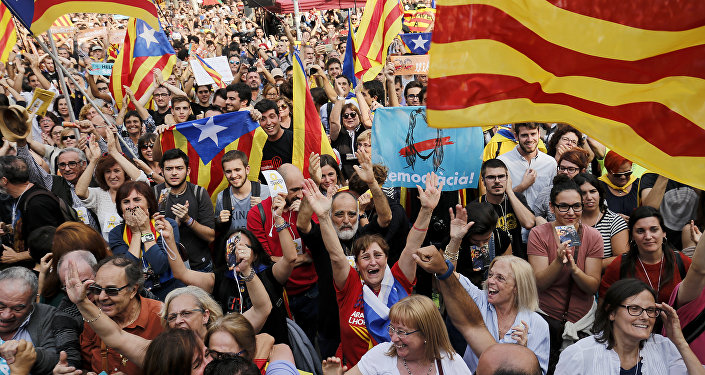 © AFP 2019 / PAU BARRENA
Catalans Rally in Barcelona After Declaration of Independence (VIDEO)
A NATO official told Reuters that the alliance considers Catalonia's push for independence to be a domestic issue of Spain, however, he urged for a resolution to the crisis "within Spain's constitutional order."

EU President Donald Tusk wrote on Twitter that the independence declaration changed nothing for the bloc as Spain remained the EU's "only interlocutor". Tusk also urged Spain to use "force of argument, not argument of force."

For EU nothing changes. Spain remains our only interlocutor. I hope the Spanish government favours force of argument, not argument of force.

© AP Photo / Santi Palacios
Catalan Independence for Dummies: From the UDI to Likely Next Steps
Abkhazia is the only state that is ready to consider recognizing Catalonia's independence. The country's Deputy Foreign Minister Kan Taniya said that recognition is possible if the region adopts all necessary normative and legal acts and sends a relevant request. Abkhazia itself declared independence from Georgia in 2008 and since then only a few countries, including Russia, have recognized it.

On October 27, the Catalan parliament in a secret ballot voted in favor of an independent Catalonia in the form of a republic. This move prompted the harsh response from the central government which triggered Article 155 and imposed direct rule on the breakaway region. The Constitutional Court of Spain has given Catalonia three days to suspend its decision to proclaim independence, according to El Pais newspaper.

Catalans Rally in Barcelona After Declaration of Independence (VIDEO)