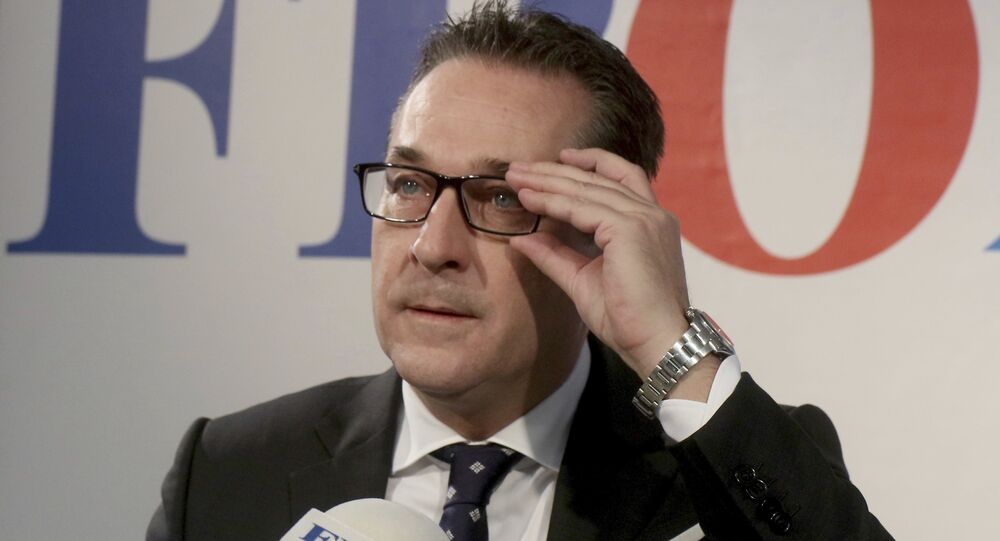 Austria's FPO Leader: 'We Are Not Extreme Right Party'

Freedom Party of Austria (FPO) leader Heinz-Christian Strache has spoken with Sputnik about a possible coalition with Sebastian Kurz's conservative Austrian People's Party (OVP) as well as debunking media myths about his party.

VIENNA (Sputnik) — The right-wing Freedom Party of Austria's (FPO) leader, Heinz-Christian Strache has emphasized that his party opposes any kind of extremism, adheres to democratic values and has nothing to do with the labels being put on it by the media.

"We are a democratic and political power, we are on the center-right in the political spectrum, we are a democratic party and a true party of freedom. This was recognized during the election, we are not an extreme right party, we are against any kind of extremism, anti-semitism and we just dealt with the subjects important for the population," Strache said in an interview.

The FPO's ideological background was the subject of numerous media attacks. The press has been placing the party on the extreme right of the political spectrum. When the FPO managed to get almost 27 percent of the vote during the 1999 national elections, earning a place in a coalition government, the European Union responded with diplomatic sanctions, freezing contacts with the government, saying that Austria had legitimized the extreme right.

Strache has expressed hope that the respect for democracy would prevail in the European Union.

"Every real democrat will respect the results of the elections even if he has another opinion and any diplomatic sanctions as a result would not be a democratic development and I assume that the democratic representatives of the EU will respect this."

Party Agenda and Allies in Europe

© AFP 2020 / John Macdougall
Growth of Right-Wing Presence in EU Parliaments May Endanger European Project
Speaking about the party's cooperation with the Eurosceptic anti-immigration Visegrad Group (V4 group), which is comprised of Hungary, Poland, the Czech Republic and Slovakia, once it enters the government, Strache noted that "it is a logical step for Austria."

"I still think that we should get closer to the Visegrad Group. And if we look at history, it is a logical step for Austria to move closer to that group. I think we should seek closer cooperation, especially when we have to defend mutual interests."

He named tackling migration, Islamic radicalization and security issues among the potential areas of cooperation with the group.

"Our areas of cooperation, for example, could be migration, fighting radical political Islam, because Islamic terror has reached the heart of Europe already. They could also, of course, be issues related to safety policy or the development of the European Union, highlighting certain injustices that have taken place in the European Union," Strache explained.

Among the issues the FPO wants to propose as soon as a new coalition government is formed would be strengthening border control, steps against Islamic radicalization and a ban on funding from abroad, which may be used for terrorist purposes.

"The Austrian borders have to be controlled. For that, we need more sufficient executive forces, the existing plan should be fulfilled in order to have more forces to prevent and fight crime … We should have consequent proceedings and procedures against Islamic radicalization. And we should forbid any funding from abroad, including from Saudi Arabia," Strache said when asked what would be the three main initiatives that the FPO would propose to fight terrorism.

The politician noted that Austria had been challenged by a surge of radical Islamic associations, including nursery schools.

"We are responsible for preventing situations that can be seen in the Middle East from taking place in the European Union. The integration [of migrants], a legal one, should also to be dealt with. We also have to express our expectations. Migrants have to agree with society, with law, also have to adapt to our values. If not, this kind of Islamic development should be forbidden in the European Union," Strache stressed.

According to the FPO leader, Austria should not leave the Schengen zone, but focus on efforts to defend the EU's external borders.

Vienna first imposed imposed temporary security checks due to a high influx of undocumented migrants in 2015. However, this summer, the European Commission recommended that Austria, as well as a number of other EU member states, lift enhanced border controls within six months.

According to Strache, the FPO has accepted the invitation by Kurz to hold talks on creating a governing coalition and also hopes the talks would not last longer than two months. In the October 15 snap election's results, OVP received 31.5 percent of the vote, while FPO won 26 percent. Thus, the formation of a coalition between the two parties would result in a majority.

"Yes, in principle but there is no reason now to rush the negotiations, there is no reason to get stressed because of the deadline, as the most important thing for us is the quality of the new government, respectful and honest negotiations that will result in a coalition deal, which would be a holiday in and of itself for the Austrian population," Strache said when asked about the possibility of reaching a deal before Christmas.

The FPO leader has announced the party's intention to discuss state debt, household deficit and subsidies during the first coalition talks.

"We will discuss financial conditions (household deficit and the debt of the Republic and subsidies) and will talk about these figures in the sense of transparency and then we'll start discussing the content."

READ MORE: 'He is Well Aware of His Power': Meet Sebastian Kurz, Austria's Chancellor-To Be

"We received an invitation to start coalition talks today. We have also made public our negotiating team. Tomorrow near midday we will begin our first discussion with the head of the OVP and we will begin by just talking over the existing issues and setting up a schedule for upcoming meetings," Strache explained.

Earlier in October, Strache reiterated his party's position that it would only enter a governing coalition if one of its members was appointed interior minister, thus gaining control over matters such as migration control and anti-terror measures.

"There are two big winners in these elections, OVP and FPO, and we have to respect these democratic results. We have always accepted that the real winner, the party with the most votes,OVP, would receive the country's chancellorship and, yes, there is a possibility that I would be vice-chancellor and also hold the position of minister of internal affairs," Strache said.

"Of course, Mr. Hofer is the president of our National Assembly and a former presidential candidate, who lost the election by a very narrow margin. He, of course, would be a very able minister of foreign affairs. But as I said previously, when we have a concrete agreement then we can discuss ministerial posts and personalities but we have a lot of able personalities in the party," Strache said when asked about Hofer's possible nomination to a ministerial position.

Speaking about relations with Moscow, the FPO leader has told Sputnik that his party would work on ending EU anti-Russian sanctions if it gets into the government coalition.

Strache stressed Russia's important role in European affairs as well as the importance of Russian-European ties for peaceful development on the continent.

"We also want, of course, to mitigate the tensions existing in Europe and we, as neutral Austria, will work in that direction and we want to find a solution in order to relieve or abolish these unhappy sanctions."

Accorrding to him, the FPO will also seek a Russian-EU free trade deal and closer cooperation on security issues.

"Our goal should also be to conclude a free trade agreement between Russia and the European Union in the future and also cooperate on fighting against terrorism."

Austrian politicians have repeatedly visited Russia, with the most recent visit of the FPO top leadership to Moscow having taken place in December 2016.

"My first visit would be Switzerland because we have especially good relations with this neighbor… And also considering direct democracy this would probably my first visit," Strache said, when asked which country he saw as Austria's strategic partner and thus his destination for a first official visit.

In the past, Strache has praised Switzerland's governance system, which allows for significant citizen involvement in the law-making process via referendums, with a lot of issues put to a popular vote rather than simply debates in a parliament as it might happen in other countries.

The FPO leader said that he would visit all the surrounding countries as well, including Hungary, the Czech Republic, Slovakia, Slovenia, Italy, "especially the north of Italy" and Serbia.

"As far as foreign policy is concerned it is also important to have good relations with United States, Russia, Israel, and China," Strache said.