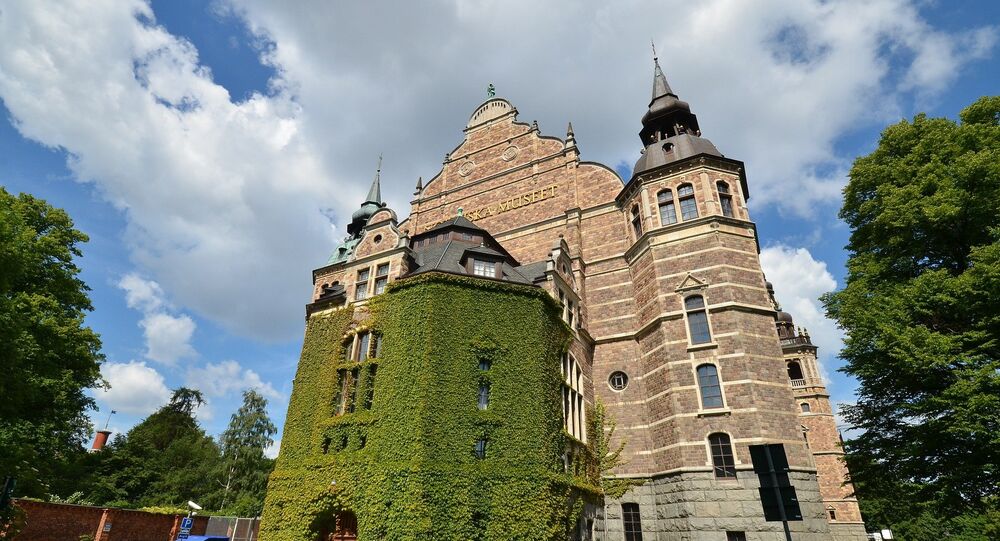 The social media campaign #Metoo in which women across the globe stepped out of the shadows to share their stories of sexual abuse is poised to become an exhibition at the Nordic Museum in Stockholm.

In recent weeks, the anti-harassment campaign hashtagged #Metoo has garnered considerable worldwide attention. In Sweden, where the public outcry triggered several scandals involving high-profile figures, the Stockholm-based Nordic Museum has started gathering social media stories about sexual abuse. The aim of the project is to preserve them as historical documents for future generations.

By the Nordic Museum's own admission, it will create a "collective image" of the campaign to perpetuate it in the digital archives.

Nordic Museum digital navigator Kajsa Hartig pointed out that the campaign must be preserved in its fullness to the extent possible to be made researchable in the future.

© AFP 2020 / Jewel SAMAD
Harassing EU Bosses, Star Journalists Get Exposed in #Metoo Afterglow in Sweden
"We will definitely convey this. This is only a beginning, a starting shot for the museum to create the bulk of its digital cultural heritage," Kajsa Hartig told Swedish Radio.

For the sake of privacy, it's not obligatory for the participants to state their name, but the age and the place of residence is welcome.

According to Hartig, there are no immediate plans for an exhibition on #Metoo, but the material gathered will be used in some way next spring, she assured.

Following the exposure of Hollywood producer Harvey Weinstein, the #Metoo campaign spread like wildfire across Sweden, which takes certain pride in having the world's first feminist government.

After an uproar onsocial media, with thousands of women sharing their experience of being harassed or sexually assaulted, thirteen #Metoo demonstrations were held across the Nordic country over the past weekend.

During the demonstration in Stockholm, which gathered thousands of participants, Gender Equality Minister Åsa Regner said she was pleased with the ongoing "deep society debate," while narrating her own experience of harassment from a fellow Swedish politician, the Aftonbladet daily reported.

Gudrun Schyman, the leader of the Feminist Initiative party, argued that women were subjected to sexual harassment "from the cradle to the grave," suggesting that women's security should be at the top of the political agenda.

"Stop raping us, for crying out loud," Amie Bramme Sey boomed from the rostrum.

​Government Preparing a Crackdown on Rape

Meanwhile, Sweden's feminist government seeks to expand the definition of rape with a so-called "consent clause" to raise the number of convictions. The new bill will be presented before the New Year.

The idea of introducing aconsent clause is to shift the burden of proof onto the supposed offender, who will thus have to prove that the counterparty has actually consented to have intercourse. This idea has been criticized for eroding legal certainty and undermining the concept of presumption of innocence. In a survey among lawyers Swedish trade newspaper Dagens Juridik conducted in 2014, half of the respondents answered it was a bad idea, as opposed to only a fifth who supported it.

So far, the #Metoo campaign in Sweden has led to rape allegations against several high-profile journalists.

Star TV presented Martin Timell had all his shows canceled on the TV4 channel after several women used the #Metoo hashtag to point out his sexual and mental abuse of them.

​A senior boss from Swedish national broadcaster SVT is now under internal investigation after an outcry from employees in conjunction with the campaign featuring allegations of "grabbing, kisses and other types of inappropriate behavior."

In yet another case, Aftonbladet's journalist Fredrik Virtanen, who has somewhat ironically enjoyed the reputation of a feminist over his illustrious career, had to take a "time out" from his job following harassment allegations from fellow journalists, including Cissi Wallin who claimed Virtanen had drugged and raped her in 2006. By her own admission, she never even thought of exposing him until the "Weinstein-gate."

Sweden's ways, where about half of the population called themselves feminists in a 2014 survey by pollster Sifo, have raised eyebrows in neighboring Norway.