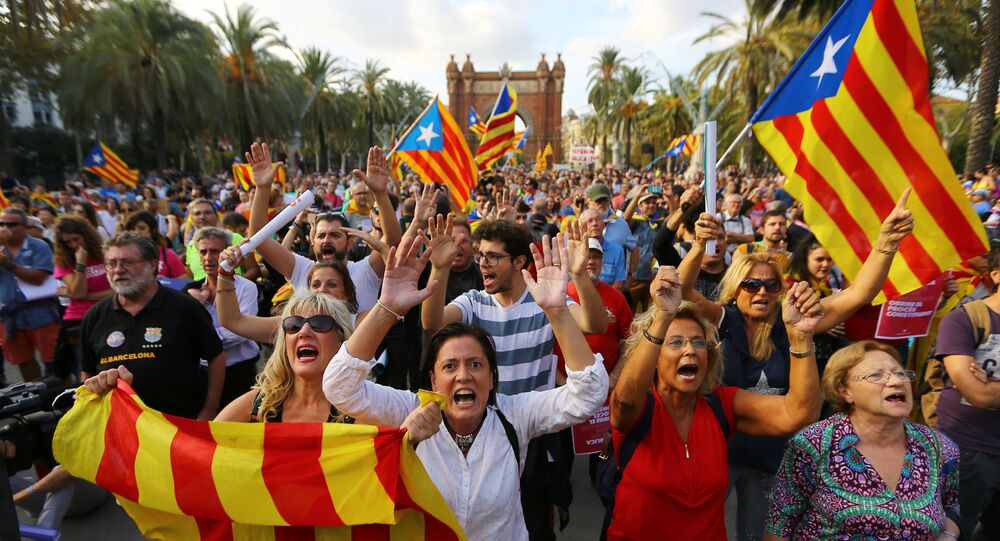 Catalonia's independence bid has thrown Spain into a political crisis and the divisions within the country continue to deepen as Prime Minister Mariano Rajoy aims to remove Catalan leaders and impose direct rule on the region.

MADRID (Sputnik) — The Spanish central authorities carried out the "worst attack" against Catalonia by invoking Article 155 of the Spanish Constitution, Marta Pascal, the general coordinator of the Catalan European Democratic Party, said Saturday.

Another representative of the Catalan European Democratic Party, Josep Lluis Cleries, compared the speech of Spanish Prime Minister Mariano Rajoy to the final period of Francisco Franco's dictatorship in Spain.

"We have returned back into 1975, we now see that the transition to democracy did not have a positive impact," Cleries said.

Before the civil war in Spain Catalonia enjoyed considerable autonomy, however, under the dictatorship of General Franco it was suppressed. The current autonomous status was granted to the region again by the 1978 constitution.

© Sputnik / Javier Luengo
People Rally in Barcelona in Support of 2 Jailed Catalan Leaders
Earlier in the day, Ferran Mascarell, a member of the Catalan government, stated that that the potential invoking the Article 155 would constitute "a form of a coup on the part of the state with respect to an autonomous structure." Mascarell indicated that such measures were unlikely to contribute to the resolution of the conflict.

Mayor of Barcelona Ada Colau has called Madrid's step an attack against the freedoms of all the Spanish citizens.

Meanwhile, not all Catalonia's political forces have condemned the decision of the Spanish authorities, in particular, Xavier Garcia Albiol, the head of the the Catalan People's Party's faction, said that the application of Article 155 was the best option both for Spain and Catalonia "in order to restore normal, democratic state."

On October 1, over 90 percent of more than 2 million Catalans who participated in the region’s referendum on independence supported the region's secession from Spain. The referendum has been deemed illegal by the central Spanish authorities.

© Photo : Youtube/Sputnik
Pro-Independence Catalans Take to the Streets of Barcelona
Catalan leader Carles Puigdemont announced on October 10 that the results of the vote enabled the declaration of independence. However, the Catalan leader called on the regional parliament to suspend the proclamation in order to pave the way for dialogue with Madrid.