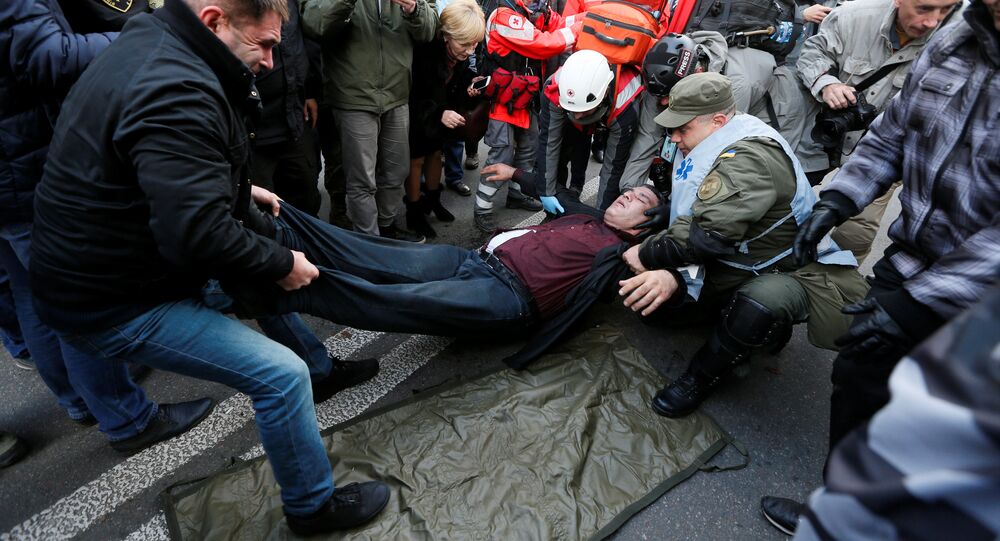 The criminal cases have been launched as mass protests in the center of the Ukrainian capital turned violent with police officers clashing with protesters.

KIEV (Sputnik) – The press service of Kiev's police force reported that "four people, including one police officer, were injured on October 17, 2017, during mass events near Ukraine's Verkhovna Rada."

According to Kiev police, the officer and a 64-year-old resident of the Ivano-Frankivsk Region were hospitalized, while two others received medical treatment on the ground.

The police said that three criminal cases had been launched for "assault of a law enforcement employee," "vandalism," and "robbery." No one has yet been detained in connection with the cases.

About 3,000 law enforcement agents were deployed to the streets of Kiev on Wednesday.

The police said that participants of the demonstrations would be checked at special checkpoints and with metal detectors.

Day 2 of anti-govt protests in Kiev, and Ukraine's National Guard has sealed off the tent camp outside parliament pic.twitter.com/nyD2n2Av3a

A mass rally, organized by representatives of various political forces, including nationalist movements, was held near Ukraine's parliament on Tuesday. The clashes between protesters and police broke out later in the day.

Artyom Shevchenko, the spokesman for Ukraine's Interior Ministry, has stressed that the police would not use force so long as the protests remain peaceful.

Participants of the rally on Tuesday were carrying flags of the Svoboda party, Fatherland party, National Corps party, the Movement of New Forces, founded by former Odessa Region governor Mikheil Saakashvili. The protestors were asking to lift lawmakers' immunity, cancel the election legislation and establish an anti-corruption court. According to Saakashvili, the protesters would insist on the resignation of President Petro Poroshenko if their demands were not satisfied.

The protesters have set up tents next to the parliament building, stating that they would not leave until their demands were met.

Some 1,500 Partake in Kiev Rallies Marking Anniversary of Maidan Killings