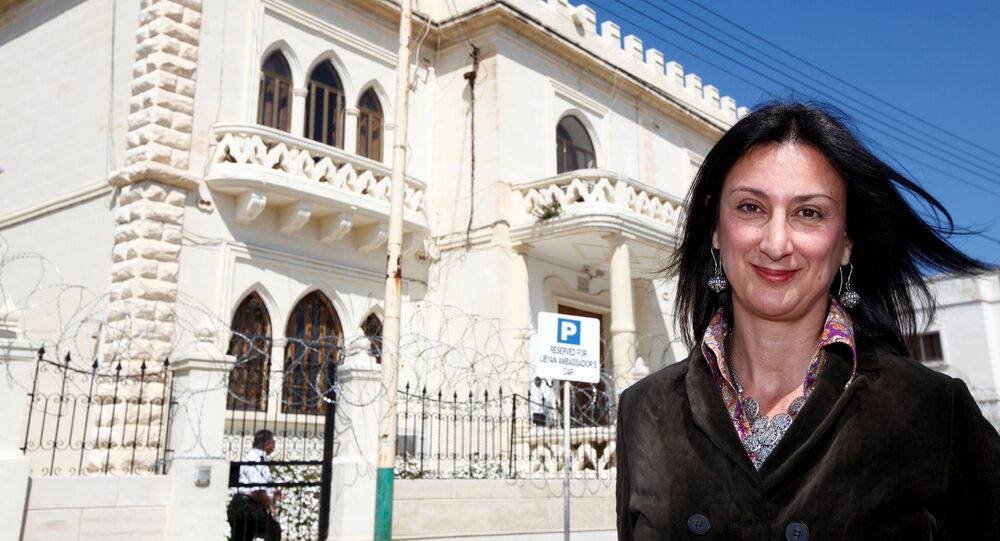 Daphne Caruana Galizia, an influential blogger in Malta who had reported on political corruption, was killed by a car bomb on October 16. Sputnik spoke to a Maltese journalist who said she was as well-known as the Pope and seen as either a "liar" or a "crusader."

A Maltese blogger who had infuriated politicians and businessmen with her investigations into corruption on the island has been killed by a car bomb.

Mario Cacciottolo, a Maltese journalist who has just returned to work on the island, said it was a "momentous" occasion and a "game-changer."

"It's a historic moment in a horrible way. She was as well-known as the Pope in Malta. People either hated her and called her a liar or they loved her and called her a crusader. There has been nothing like this since the 1970s and 1980s when there were two political murders, neither of which were ever solved," Mr. Cacciottolo told Sputnik.

Vigil for murdered journalist Daphne Caruana Galizia gets under way in #Malta pic.twitter.com/ooq0UecDP2

Daphne Caruana Galizia has been killed. The rule of law has collapsed. Our democracy is at stake.

​Ms. Caruana Galizia, 53, was killed when the rental car she was driving blew up shortly after she left her home in Bidnija. One of her sons heard the explosion and rushed outside.

Mr. Cacciottolo said there would be a "huge parade of suspects."

"It might look as if it was linked to Maltese politics. But the net they will cast will have to be very wide because she had recently been looking into money laundering. There are suspicions, voiced by people like Daphne, that Malta is a fertile place for money laundering, but nothing's been proven. Because the economy is booming it has become an attractive place for money laundering because there is so much legitimate money sloshing around and she had been looking into that," Mr. Cacciottolo told Sputnik.

Outraged to hear that Maltese investigative journalist+blogger Daphne Caruana Galizia has been murdered this afternoon not far from her home with a car bomb. I issue a €20k reward for information leading to the conviction of her killers. Her blog: https://t.co/XQCEXBKYn3 pic.twitter.com/ITHlBRzr0J

​The killing has echoes of two other assassinations which had huge impacts for their countries — the mafia car bombing of Judge Giovanni Falcone in Italy in 1992 and the drive-by shooting of investigative journalist Veronica Guerin in the Republic of Ireland in 1996.

Mr. Cacciottolo said Ms. Caruana Galizia was a journalist and former assistant editor who had a newspaper background.

"Her son Matthew was part of the team that worked on the Panama Papers, so the family has pedigree," Mr. Cacciottolo told Sputnik.

Ms. Caruana Galizia had accused Malta's prime minister Joseph Muscat, and his wife Michelle of being involved in corruption. She produced a document claiming US$1 million from Leyla Aliyeva, the daughter of the President of Azerbaijan, had been paid into an offshore account belonging to Michelle Muscat.

Shocked and outraged by murder of journalist Daphne Caruana Galizia. If journalists are silenced, our freedom is lost

But Mr. Muscat, who had called it an "outright lie," won a snap election in June this year after she made her allegations and he has condemned her killing.

"I condemn without reservations this barbaric attack on a person and on the freedom of expression in our country," said Mr. Muscat, appearing on Maltese television.

"Everyone knows Ms. Caruana Galizia was a harsh critic of mine, both politically and personally, as she was for others too," he added.

"We are horrified by the fact that the well-known and respected journalist Mrs. Daphne Caruana Galizia lost her life yesterday in what was seemingly a targeted attack," said Mr. Muscat.

Daphne Caruana Galizia, thorn in the side of crooked politicians, the Mafia & money launderers. May your truths be known#PanamaPapers pic.twitter.com/QyKPwfHji2

"The right of a journalist to investigate, ask uncomfortable questions and report effectively is at the heart of our values and needs to be guaranteed at all times. We trust now that justice will be brought even if this will not be enough to right this wrong," said European Commission spokesperson Margaritis Schinas.

Thousands of people attended a candlelit vigil for the campaigning journalist in the town of Sliema on Monday evening.

Shocked by the murder of the journalist #DaphneCaruanaGalizia. Justice must prevail pic.twitter.com/nuk3goUoHO

Mr. Cacciottolo said it was not surprising Mr. Muscat had already invited the FBI and Dutch experts to come to the island to help with the investigation.

Little Hope of Solving the Crime

He said the Maltese police did not have a great track record for solving serious crimes and he said a spate of car bombings this year, believed to be linked to organized crime, had so far not led to any arrests.

"History would suggest they will never get who did this," Mr. Cacciottolo told Sputnik.

"There is also the fact that she had criticized everyone. She had accused the head of the armed forces, the prime minister, the head of the opposition. She had been scathing about the police. All the forces in Malta who would look into this had been on the sharp end of her pen," Mr. Cacciottolo told Sputnik.

Malta's Economy Minister, Chris Cardona, had sued Ms. Caruana Galizia for libel after she claimed he visited a brothel while on an EU trip to Germany.

A magistrate who had been appointed to lead the investigation into her murder, Consuelo Scerri Herrera, recused herself on Tuesday, October 17, because Caruana Galizia's family said they had no confidence in her. Herrera had sued the blogger for harassment.

Nationalist Party politician Louis Galea, a former home affairs minister, said there was no doubt it was a murder with "evident political connotations."

"Daphne has often spoken about the danger she was running with the investigations she was carrying on, with her journalistic reporting and with the Running Commentary [blog] in which she fearlessly exposed all that resulted to her and her reflections and questions on it. She even reported threats to her safety and life and to her family to the police. What protection did the police provide?" Dr. Galea said in the Times of Malta newspaper.