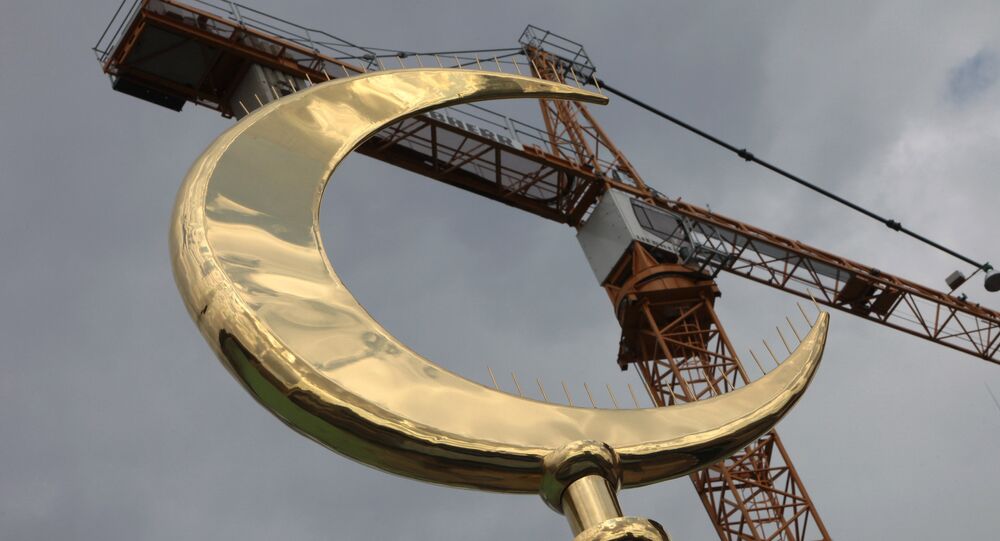 An established Swedish historian has said he was "ashamed" of living in a nation "without history" and called on a municipality to call off plans of building a giant mosque accommodating up to 1,000 believers on a historic site.

The mosque slated for construction in Fyllebro outside Halmstad has become a polarizing issue in Sweden, with many cultural figures joining in the debate. Dick Harrison, a professor of history at Lund University, has strongly condemned the municipality for its construction plans, implying they are about to destroy a place of historic significance for the Nordic nation.

The reason for his ire is that the land outside Fyllebro is where Swedish troops managed to stop the Danish offensive to Gothenburg in a decisive battle during the Skåne War in 1676, probably the most important in the nation's history, Harrison argued.

© AP Photo / Matt Rourke
Swedish Politician Slams Church for Islamization, Likens Quran to 'Mein Kampf'
Professor Harrison pointed out that many historic findings have been excavated from the former battlefield over the decades, including pistol bullets, artillery projectiles and a horseshoe from the Swedish cavalry. To stress his disappointment, Harrison added he was ashamed of living in a Sweden without its past.

"The battle of Fyllebro was the turning point of the Skåne War, which ensured Sweden's success in retaining these parts of the country. Destroying such a historic place by wiping out the cultural layer and sabotaging the perspective of archeological investigations on the former battlefield is from a historical perspective non-defensible," a dismayed Dick Harrison told the local newspaper Hallandsposten, lamenting the fact that the municipality lacks resources to make the field a tourist attraction.

​Harrison argued that the former battlefield still hosts a plethora of yet unearthed artifacts definitely worth investigating. The area already boasts a highway, a gasoline station, a car wash and a grocery store, which according to Harrison should act as a dissuasive example.

© CC0
New Swedish Books Enlighten Preschoolers About Islamic Clothing, Polygamy
Harrison specifically stressed that he is not against a mosque in Halmstad as such and emphasized that he loathed the idea of being used as an argument in a potentially Islamophobic debate. Nevertheless, he strenuously underscored that continuing with the mosque plans would be a mistake.

Earlier this year, the Halmstad municipality reportedly sold 7,000 square meters of land intended for a mosque. The decision was railroaded through despite the fact the mosque imam had previously made controversial statements on the internet, comparing homosexuality to a virus. Henrik Oretorp of Halmstad housing committee told the Swedish national broadcaster that it was impossible for the municipality to waver in such an important land sale agreement. According to SVT, the municipality receives SEK 1.4 million ($170,000 or roughly $25 per square meter) for the land sold to the Islamic Children and Culture Association.

​The Skåne War, also known as the Scanian War, was a part of the Northern wars involving the union of Denmark-Norway, the Margraviate of Brandenburg and Sweden. It was fought from 1675 to 1679 in the former Danish provinces in what now constitutes southern Sweden, mainly in the province of Skåne and involved fierce fighting both on land and at sea.

​Dick Harrison is a renowned Swedish historian. In addition to being a professor of history at Lund University and a celebrated expert on the Middle Ages, he is a regular contributor to the Swedish journal Populär Historia ("Popular History"), as well as the author of a series of historic articles in the Swedish newspaper Svenska Dagbladet. Harrison has penned around 40 books on history and was the editor-in-chief for a comprehensive series about Swedish history in eight volumes released in 2009-2013. On top of his historical works, Harrison has written three historical novels about a fictitious 7th-century warrior.