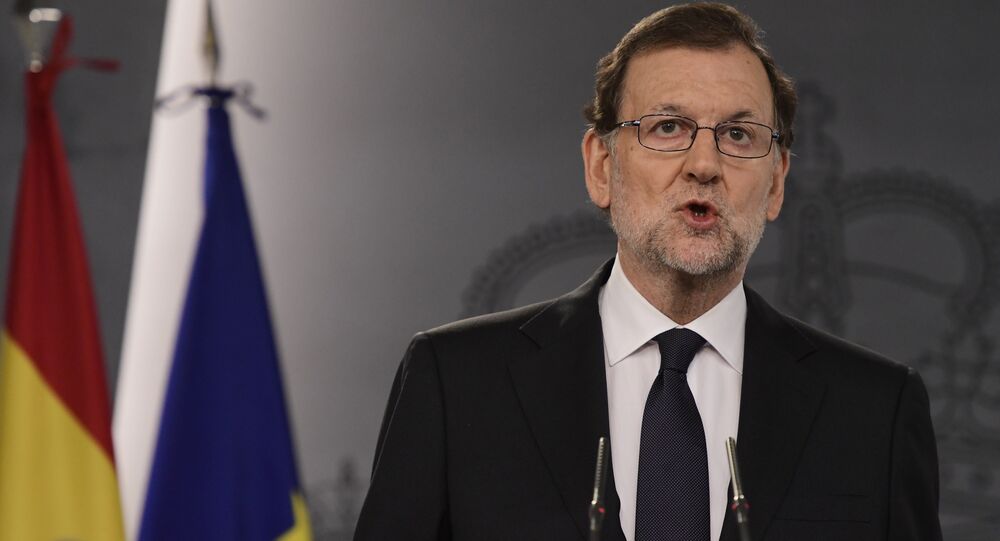 Spanish Prime Minister Mariano Rajoy has said that the government formally asked Catalonia if it had declared independence, after Catalan leader Carles Puigdemont made his first speech on Tuesday following the controversial referendum that took place on October 1.

Puigdemont said on Tuesday that millions of Catalans believe that the region should become an independent state and asked for the mandate to declare it a sovereign state. However, he added that Barcelona delayed any declaration of independence in order to continue talks with Madrid.

Rajoy said on Wednesday after an emergency cabinet meeting that Madrid would do everything possible to prevent Catalonia from seceding.

© Sputnik / Javier Luengo
The Catalan Diaries: All Eyes on Catalonia
The prime minister stated the situation with the declaration of independence must be clarified before any step is taken under Article 155 of the constitution, which allows the central government to meddle in the affairs of its autonomous regions. However, Rajoy did not specify whether Madrid would assume direct control of Catalonia.

"The answer from the Catalan president will determine future events, in the next few days," the prime minister pointed out.

There is no specific requirement for the enactment of article 155 under the Spanish constitution.

Meanwhile, on Wednesday EU Commissioner Valdis Dombrovskis called for an end to the dispute over the vote in Spain, urging respect for constitutional order in the southern European nation. Previously, EU officials had labeled the tensions triggered by the referendum an internal affair of Spain.

The referendum was surrounded by scandal with the central government sending the national guard the region in an effort to disrupt the vote. The official results of the vote showed that 90.18 percent, or more than 2.28 million voters, supported the secession of Catalonia from Spain, with a turnout exceeding 43 percent. However, Madrid refused to recognize those results.

Catalonia's Leader May Address Parliament on Referendum Results on October 10