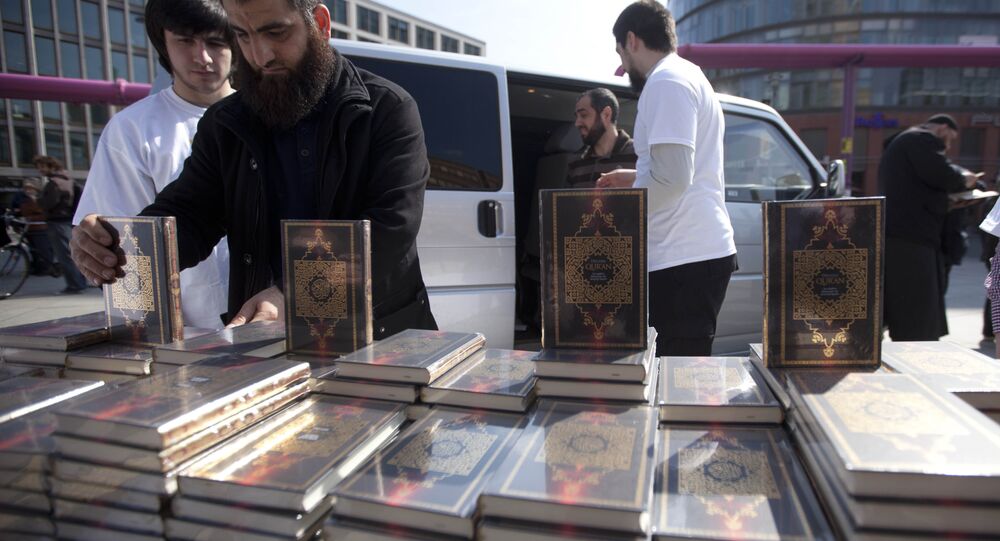 How Can Germany Manage Its 10,000 Strong Population of Salafists?

Mosques in Germany are vigilant against the threat of Salafism and most of them reject extremist preachers such as Abu Adam, an ostensibly "moderate" Salafist preacher whose arrest on suspicion of assisting Daesh shocked Germany earlier this year, integration expert Cemil Sahinoz told Sputnik.

The case of an ostensibly "moderate" Salafist imam, who turned out to be associated with the Daesh terrorist group, is a warning of the danger posed by Salafism in Germany, teacher and activist Birgit Ebel says.

"It's a shocking case," Ebel, a teacher in Herford who has set up a charity to prevent the radicalization of young people, told Sputnik Deutschland.

Called Hesham Shashaa or Abu Adam, the imam had preached in Leipzig, Munich and elsewhere in Germany, promoting himself as a moderate. He had even featured in the international press, claiming to have turned young people away from radicalism.

© CC0
'I Just Want to Go Home': German 'Daesh Bride' Teenager Could Face Death Penalty
Ebel revealed that she had herself met Shashaa, who lived in Leipzig with his four wives and 14 children. A few years ago, the German press named Shashaa the "beating preacher" after one of his wives made an allegation of domestic violence which she subsequently withdrew.

Despite that, Ebel said she had no idea he harbored extremist sympathies.

"I met Abu Adam during a two-day meeting at the Federal Center for Political Education. He was very pleasant. He was regarded as commissioner on terrorist issues who worked with the authorities."

However, in April Spanish police arrested him in Alicante on suspicion of working with and helping to fund the Daesh terrorist group. According to Bayerischer Rundfunk, the Spanish authorities suspect him of funneling money from Saudi Arabia and the UAE to Islamist cells in Europe.

Worrisome: Hesham Shashaa was arrested in #Spain for suspected links to #ISIS, but worked for reputable deradicalization program in #Germany https://t.co/WtmH0jG3gh

"The advisory body was supposed to prevent departures to IS [Daesh] — instead, it cooperated with a suspected IS sympathizer."

​​He was allegedly planning to spend €20,000 on a mosque in Alicante at the time of his arrest, and had set up a network to shelter Islamists arriving from Iraq and Syria in Europe.

Ebel has since come to the conclusion that it is not possible to work with even so-called "moderate" members of the Salafist movement, a fundamentalist form of Sunni Islam which advocates strict adherence to Sharia law and the institution of a theocratic Islamic state.

Cemil Sahinoz, chairman of the Alliance of Islamic Communities in Bielefeld, told Sputnik that in fact, radical imams are rarely found working in mosques. According to Sahinoz, radicalism tends to begin in smaller communities which aren't connected to larger religious bodies.

"Such radicals [Islamists] are found in mosque communities which don't belong to the well-known large Islamic associations," he explained.

"These are more likely to be independent ones which formed somewhere in the neighborhood, which to start with don't seem to be a mosque community. They also don't necessarily have a lot of communication with the surrounding Muslim community."

© AFP 2020 / NICOLAS ASFOURI
‘A Completely Wrong Direction’? Austrian Burqa Ban Enforced Amid Protest
Sahinoz gave an assurance that "we are also in constant contact with the intelligence service, the police and other authorities working to prevent Salafism," and a radical imam would quickly be "kicked out" of a mosque that was a member of his organization.

Just a fraction of Germany's mosques are suspected of preaching radical Islam, and the problem of radicalization has more to do with "isolated individuals" than mosques and their communities, Sahinoz said, adding that the internet is often the source of radical ideology for impressionable young people.

"Radicalization does not take place in established locations such as mosque communities where a clear anti-extremist theology is taught."

"There are 2,000 mosques in Germany and of these just 15 mosques cropped up in the intelligence report on Salafism," representing just "a handful of mosques," Sahinoz argued.

Thomas Ritter, spokesman for Germany's Federal Office for Migration and Refugees (BAMF) told Sputnik that the German federal government "attaches great importance to the topics of prevention and de-radicalization."

To deal with the problem, BAMF set up an advisory body to tackle radicalization, which includes a hotline for relatives and acquaintances concerned that somebody they know is being radicalized. Since 2012, the hotline has received more than 3,600 calls which resulted in more than 950 consultations with the authorities and civil society organizations.