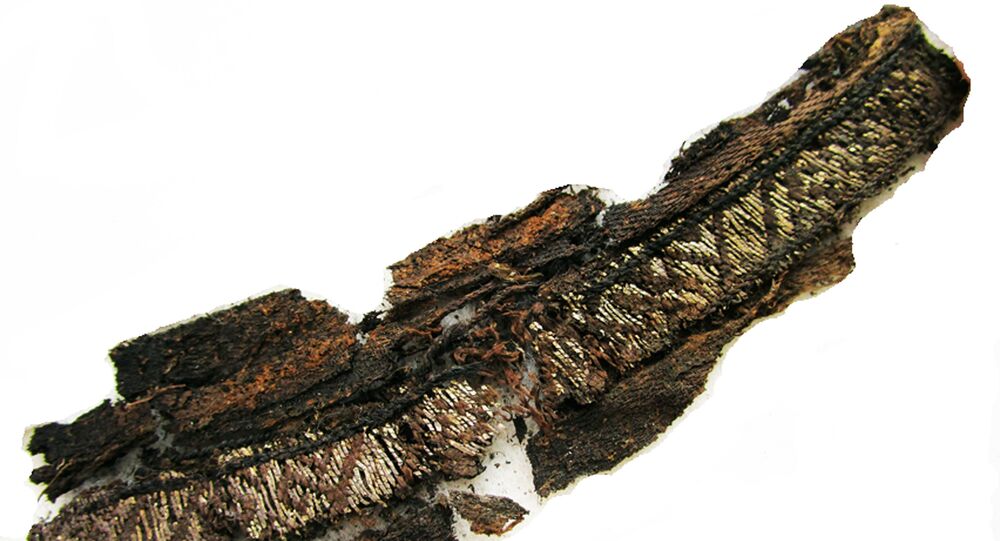 A sensational discovery by researchers from Uppsala University threatens to add new fuel to the fire of the discourse about multiculturalism as what has previously been considered typical Viking Age patterns in silver have now proven to be geometric Muslim characters representing "Allah" and "Ali."

While working to recreate textile patterns for an exhibition at the Museum of Enköping in Sweden, the researchers from Uppsala University discovered that the woven bands actually contained ancient Arabic script.

Kufic characters primarily known from burial monuments and mausoleums in Central Asia have been found in the burial costumes of Viking Age chamber graves in sites such as Birka and well as boat graves around Old Uppsala, both of which rank among the focal points of the Viking culture.

© CC BY 2.0 / Jim G / Viking burial vessels
Viking-Era Ship Burial Unearthed From Market Square in Norwegian City
In the past, historians, archaeologists and other researchers have often crossed swords with each other trying to produce a more varied and nuanced picture of the people that formed Viking culture in Scandinavia. After the word Allah was found depicted in mirror image on a burial cloth, the debate on the ways and habits of the Vikings was immediately re-kindled. Muslims use the word "Allah" for God, while "Ali" is the name of Prophet Muhammad's cousin and son-in-law.

"Presumably, Viking Age burial customs were influenced by Islam and the idea of an eternal life in Paradise after death," Annika Larsson, a researcher in textile archaeology at the Department of Archaeology and Ancient History at Uppsala University, told the Swedish science portal Forskning. "Grave goods such as beautiful clothing, finely sewn in exotic fabrics, hardly reflect the deceased's everyday life, just as little as the formal attire of our era reflects our own daily lives. The rich material of grave goods should rather be seen as tangible expressions of underlying values," she ventured.

​Previously, Annika Larsson emphasized the widespread occurrence of Eastern silk in Scandinavia's Viking Age graves. In the key Early Iron Age site of Old Uppsala, for instance, findings of silk in the clothing of those buried are more prevalent than findings of wool and linen.

Larsson referred to Islam's central religious text, the Quran, where it is written that inhabitants of Paradise will wear garments of silk, venturing that it may explain the widespread occurrence of silk among Vikings. According to Larsson, the mirrored Kufic letters may have been an attempt to write prayers in a way allowing the Arabic characters to be read from left to right, which was more habitual to the Northerners.

Larsson's research findings are presented as part of the Viking Couture exhibition at Enköping Museum. The project is funded by the Swedish Foundation for Humanities and Social Sciences. In an integrated sub-project, DNA analyses are performed on human remains from relevant graves, in collaboration with Professor Marie Allen and her research team at the Department of Immunology, Genetics and Pathology at Uppsala University. It is hoped that the sensitive DNA analysis methods will help provide answers to questions on Vikings' kinship and geographic origin.

While Annika Larsson and her colleagues have received some positive attention from fellow historians and archeologists, she also suggested that many also voiced their discontentment with her interpretation of Viking culture.

"The negative reactions have come from xenophobes, without any exceptions. It's the Muslim connection that they find particularly disturbing," Annika Larsson told Finnish national broadcaster Yle, revealing that the sheer thought of potential links between Viking traditions and Islam have upset people who take pride in their "pure" Scandinavian ancestry.

Among other things, Viking runes and imagery are widely used by the anti-immigration activists and right-wingers, including the controversial Nordic Resistance Movement, which is a pan-Nordic far-right movement that recently staged a demonstration in the city of Gothenburg, which resulted in a mass brawl.

Here's a video I made of the glorious Viking March in #Sweden today. So proud of our Swedish kin!
RT. ⚡️⚡️#NRM #NMR #AltRight #WhitePeople pic.twitter.com/uH4phirKcT

​During the Viking Age, which spanned from the late 8th century to the mid-11th century, the Scandinavians explored swaths of Europe and Asia for trade and conquest, establishing outposts from today's Greenland to Russia, Ukraine and Turkey. The Volga Trade Route, which was utilized by early Russians and Vikings alike, went deep into Muslim lands, enabling interaction between the cultures. There is also plenty of written evidence that Vikings made it as far as Baghdad.