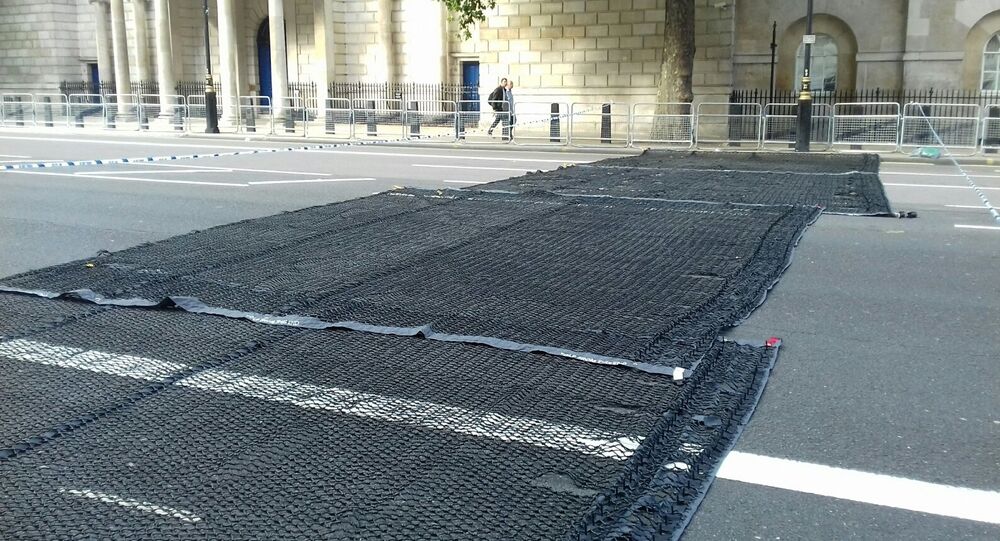 How Will UK Stop Terrorists Attacking Houses of Parliament? With Giant Mats!

Britain is on alert for terrorist attacks in the wake of a series of bomb, knife and vehicle assaults in London and Manchester this year. But what are these giant mats that have appeared around various targets, including the Houses of Parliament?

Giant mats have appeared on the road outside the Houses of Parliament in central London, months after a car and knife attack which ended with the deaths of a police officer and four other people.

The mats may look harmless, but they have tungsten steel spikes which dig into the wheels of vehicles, slowing them down and quickly stopping them in their tracks.

"This equipment undoubtedly has the potential to save lives and is just one of a number of measures being taken to provide protection to crowds attending major events in London and reassuring businesses, workers and visitors as they go about their daily lives," said Chief Inspector Nick Staley of the Metropolitan Police's protective security operations unit.

The Metropolitan Police has deployed these special mats — known as Talons — which are designed to stop cars, vans and small trucks from driving onto the pavements.

The Talons cannot be used every day of the year, but are laid across the road during special occasions, such as the state opening of Parliament. They are highly mobile and can be deployed anywhere in the capital or even further afield if there is a heightened risk of terrorist attack.

The Talon system has been specially designed to prevent vehicles suffering blowouts which might send them out of control. Tests have shown that vehicles hitting them skid in a straight line and come to a controlled stop. The mats can be deployed in less than a minute, which enables them to be used in a dynamic terrorist situation.

The Met says they are just one of a number of tools being used to keep London's streets safe.

On March 22, Khalid Masood drove a Hyundai Tucson car into crowds on Westminster Bridge, mowing down dozens of people, before jumping out and stabbing to death a police officer with a knife.

© Sputnik / Alex McNaughton
Police officers cordon off the territory near the UK Parliament in London where an assailant attacked a police officer and pedestrians.

Masood was then shot dead, but the incident highlighted the vulnerability of the home of British democracy.

Vehicle barriers were installed on Westminster Bridge, London Bridge and seven other bridges after the incidents in March and June.

In May, the National Police Chief's Council lead on armed policing, Simon Chesterman, said firearms officers had been given new training to enable them to stop vehicle drivers who possess murderous intent.

© REUTERS / Eric Gaillard
Bullet imacts are seen on the heavy truck the day after it ran into a crowd at high speed killing scores celebrating the Bastille Day July 14 national holiday on the Promenade des Anglais in Nice, France, July 15, 2016.
He said tactics had been changed after Mohamed Lahouaiej-Bouhlel killed 86 people with a truck in Nice, France and Anis Amri mowed down 12 people at a Christmas market in Berlin.
...
Reddit
Google+
Blogger
Pinterest
StumbleUpon
Telegram
WhatsApp
03

UK Police: Terrorists May Break Into Parliament in Less Than 5 Minutes