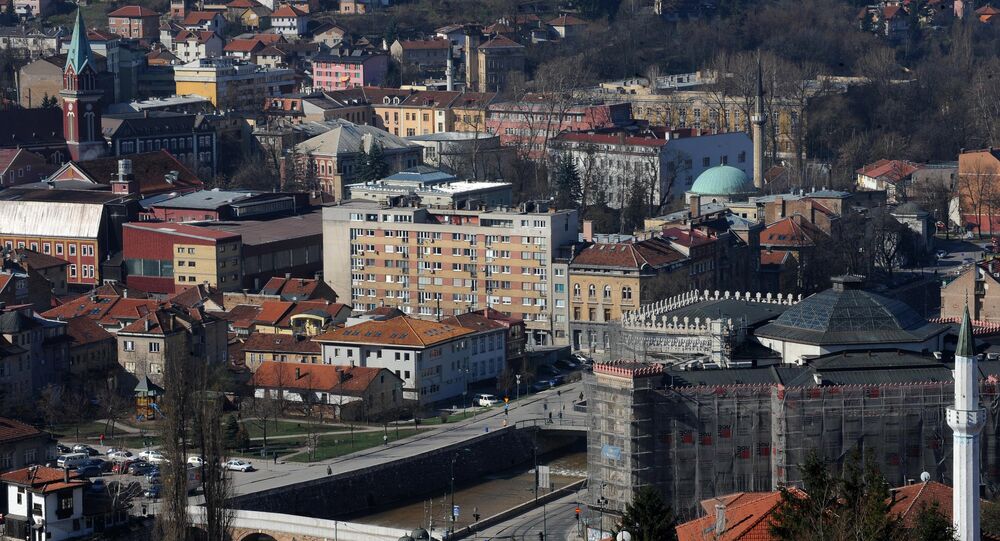 Russian ambassador to Bosnia and Herzegovina in an interview to Sputnik spoke about the territorial integrity of the Balkan country.

BELGRADE (Sputnik) – Moscow supports the territorial integrity of Bosnia and Herzegovina in line with the Dayton Agreement that ended the 1992-1995 Bosnian war, Russia's ambassador to the Balkan country, Pyotr Ivantsov, said in an interview with Sputnik.

"We have signed the Dayton Agreement [as a guarantor]. The territorial integrity of Bosnia and Herzegovina is one of the elements of this treaty alongside the equality of all the entities and the three state-constituting nations. We have signed this [treaty], this means that we support the territorial integrity of Bosnia, the development of Bosnia as an independent state," the diplomat said.

© AP Photo / Thibault Camus
Bosnia and Herzegovina Slam Czech Leader's Claims on Terrorist Base
Ivantsov stated that the current Bosnian borders' might be changed only if Bosnian people agree on this. Ivantsov also reiterated Russia’s interest in the development of mutually beneficial relations with Bosnia in various areas.

"We are one of the guarantor states of the Dayton Agreement, and our influence in these issues is focused mainly on compliance with the Dayton Peace Accords, the objective of which is a stable, independent Bosnia and Herzegovina which is party to regional cooperation, which meets the interests of all the Balkan nations," Ivantsov pointed out.

Regarding the possibility of Bosnia joining EU anti-Russia sanctions, the diplomat said that Sarajevo maintains neutrality in the issue. Economic relations between Russia and Bosnia have actually grown after the introduction of EU restrictions against Russia, Ivansov added.

Besides, in August, Czech President Milos Zeman said that Daesh terror group (banned in Russia) members might create a terror base in Bosnia after fleeing Syria and Iraq following their defeats there. The Russian official rejected the presence of such an imminent threat in the Balkan nation.

© REUTERS / Francois Lenoir
Decision on NATO Membership Is Up to Bosnia and Herzegovina's Government Only - Stoltenberg
Moreover, the diplomat added that around 300 Bosnian nationals participated in military conflicts in Syria and Iraq. Around 60 of these died and 70 have returned to the country, according to Ivantsov.

"We cooperate with the authorities of Bosnia as a whole and Republika Srpska particularly to counter the terrorist threat," the ambassador pointed out, stressing the Europe-wide nature of the threat.

In addition, after seceding from Yugoslavia in 1992, Bosnia was in a state of war until the Dayton Agreement was signed in 1995. Bosnia currently consists of two autonomous entities, the Serbian-majority Republika Srpska and the Federation of Bosnia and Herzegovina dominated by Bosniaks and Croats, as well as the self-governing Brcko district.

Bosnia and Herzegovina's Economy Thrives Thanks to Arms, Drugs and Organs