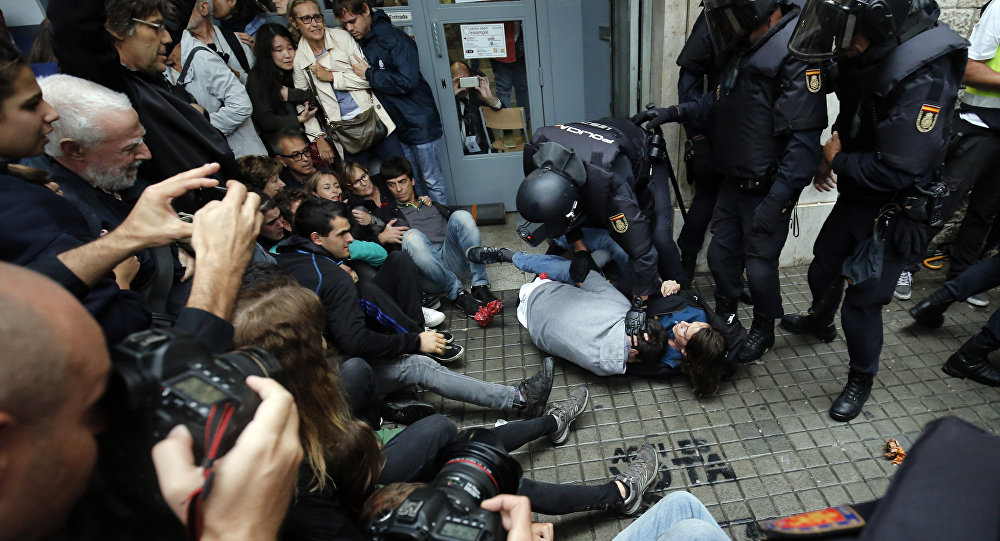 The Spanish government is considering the independence referendum to be illegal and took measures aimed at foiling the vote: police resorted to rubber bullets and tear gas to disperse the protesters, who attempted to prevent police from shutting down the polling stations. As a result, at least 844 people were injured in clashes.

BARCELONA (Sputnik) — Catalan President Carles Puigdemont said that the European Union should not ignore violations of human rights by the Spanish police during clashes with the supporters of referendum, which is considered illegal by Madrid.

"Right now I want to appeal to Europe! We, the Catalans, have a right to be respected. The European Union can no longer look away. The European Union should react before the abuse of a state which is behaving in an authoritarian manner and it should act quick to maintain the moral authority within and beyond our continent," Puigdemont said in a televised address.

The Catalan leader stressed that the central government had responded with repression and violence to Catalonia's aspirations.

"The path we are going to move forward is going to be walked by all of us together and we are open to the proposals of dialogue, which will respect the will of the Catalan people and we are open to offers of mediation that can help us along this path," Puigdemont said. 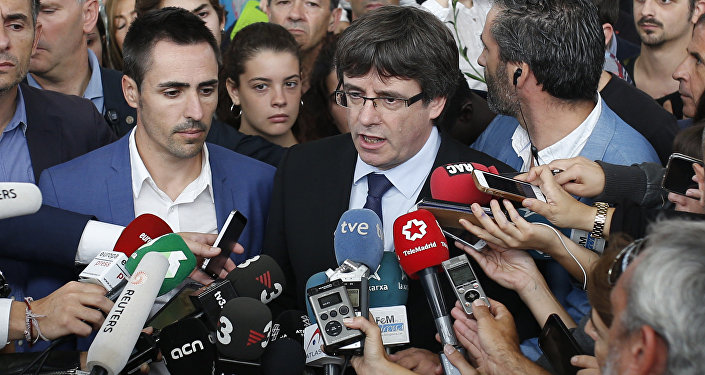 "We demand loud and clear, even in a desperate way, we demand that the international community should take a stand. In Catalonia we need an interlocutor who respects human rights… If the EU and Mr. [President of the European Commission Jean-Claude] Juncker support repressions, they should say so, or whether they are with the people, they cannot look away. If they close their eyes to what is happening in Catalonia, it would be clearly that they are supporting repression, violence and brutality," Fachin told reporters.

The politician expressed hope that a number of the European Parliament members would support people of Catalonia, noting that Brussels and EU High Representative for Foreign Affairs and Security Policy Federica Mogherini were taking too long in reacting to the human rights violations in the region.

Catalan ombudsman Rafael Ribo said that his office will send 75 reports of Catalonia's residents on human rights violations to the United Nations, as well as to the EU Council and the European Ombudsman.

"We have up to 75 reports, which have been prepared today and all these are based on complaints which are related to the safety of the Catalan people, who have been victims of aggression and violence that has been carried out by representatives of the public forces. All this investigations that we are working on will be elaborated further and will be sent to the Spanish ombudsman, to the Home Affairs Minister and to the Spanish government, also to the EU Council, the ombudsman for the EU and also to the representatives of the UN," Ribo told reporters on Sunday.

© AFP 2019 / Raymond ROIG
Violence Is Not the Answer: Int'l Community Reacts to Madrid Tactics in Catalonia
The ombudsman also noted that his office had been working on the cases of force abuse by the police in different polling stations across the region. He added that his office was going to investigate who had commanded such charges and what specific orders the police had have for these charges to take place.

According to the Catalan ombudsman, his office was also very concerned and started an investigation into the attack on a woman, whose fingers had been intentionally broken by the police officer.

"I want publicly say that we will specifically investigate an aggression that took place against a woman with great violence braking fingers of her hands. It is very clear that her fingers were broken intentionally and there has been a sexual harassment as well," Ribo said.

He also noted that the ombudsman's office would investigate into detention of three people. Ribo also expressed concern with the use of rubber bullets against the civil population.

"We are also conducting a probe into the use of rubber bullets that have been shot by the Spanish police, based on the information that we have received. We are talking about dozens of shooting and we have people injured, they have had to be surgically treated," he stated.

© REUTERS / Enrique Calvo
Spain's PM to Thank Policemen for Their Work During Independence Referendum in Catalonia
The ombudsman also questioned under what regulations the personal items had been searched and ceased by the Spanish police, especially computers and electronic materials in different governmental and public institutions across Catalonia.
...
Reddit
Google+
Blogger
Pinterest
StumbleUpon
Telegram
WhatsApp
144
Topic:
Catalonia's Independence Referendum (118)