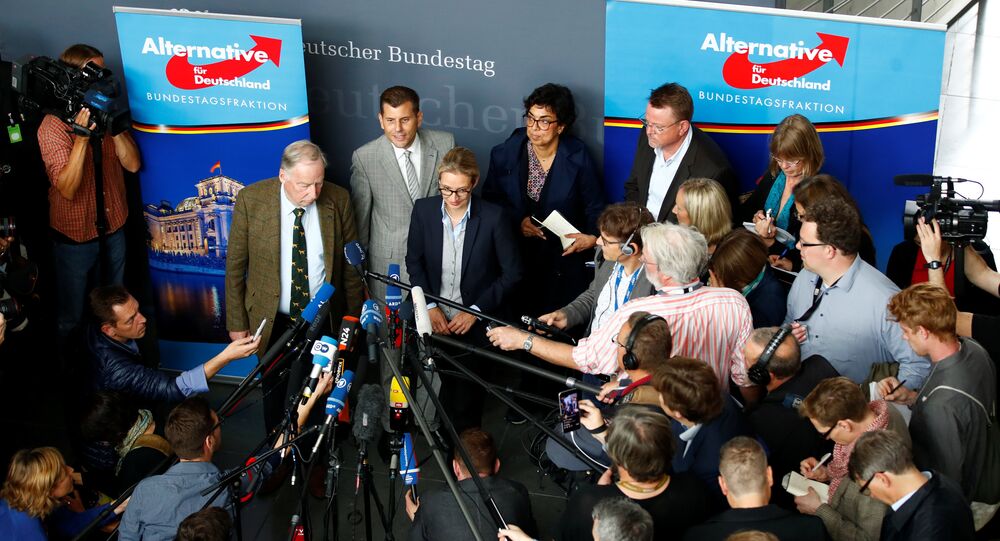 The 2017 German federal elections brought the first representation of a right-wing party to Berlin since World War II, with the Alternative for Germany (AfD) taking nearly 100 seats in the Bundestag. The academic community is struggling to explain the reasons behind the popularity of the nationalist party.

The success of the Alternative for Germany party in the recent Bundestag elections can be explained by the fact that a large segment of the German population doesn't feel that they have a voice in the country's parliament, Dr. Nils Diederich, Professor of Political Science at Berlin's Free University said.

"I don't think people vote for the AfD because they want concrete policies," Diederich told Radio Sputnik. "I think it is more linked to the idea that the AfD is channeling discontent, channeling the feeling that the parliament is not really representing all of Germany, and that there is just a part of the German population that simply doesn't feel represented in the German parliament," he continued.

According to the analyst, the fact that many AfD members come from academic and business circles gives them credibility.

"The AfD was founded in 2013 by academics and economists not agreeing with the path the CDU, the government, has taken. Many of them originally came from the CDU, from the conservative and liberal wings," Diederich said.

© REUTERS / Wolfgang Rattay
The East Strikes Back: Political Scientist Explains Popularity of Germany's AfD
According to Diederich, the AfD was not perceived as something in the tradition of other right-wing parties like the NPD or the Republicans.

In contrast to AfD, "they [the NPD and the Republicans] have always had a more culturalist approach, even, let's say, a racist discourse…always referring more or less openly to the Nazi past and this was definitely a no-go for most German voters," the expert concluded.

This year's general elections in Germany proved to be historic as nationalists won seats in the parliament for the first time since the Second World War. The Alternative for Germany Party (AfD) came in third with 12.6 percent of the vote.

AfD's hardline stance on the refugee crisis helped it to win seats in 13 out of Germany's 16 states. One of the party's leaders — Beatrix van Storch said the outcome of the election would change the country's political system.