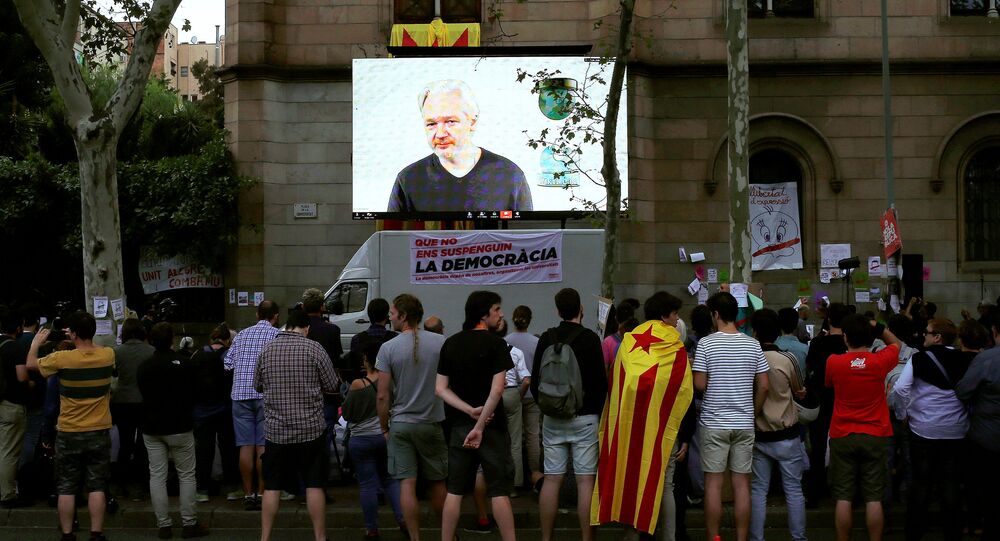 WikiLeaks founder Julian Assange described the current situation in Catalonia before the region's referendum on independence from Spain as world's first internet war.

MOSCOW (Sputnik) —  He explained the statement, saying that both Barcelona and Madrid are actively using IT to achieve their goals.

​On Sunday, Catalonia is expected to hold an independence referendum. The Spanish federal government has filed a complaint with the country's Constitutional Court over the Catalan government and parliament approving the law on the independence vote. The court has taken the complaint under review, outlawing the plebiscite.

The world's first internet war has begun, in Catalonia, as the people and government use it to organize an independence referendum on Sunday and Spanish intelligence attacks, freezing telecommunications links, occupying telecoms buildings, censors 100s of sites, protocols etc.

​He added that the tensions around Catalonia's vote could be described as the most significant western conflict between people and the state since the fall of the Berlin wall.

What is happening in Catalonia in the most significant Western conflict between people and state since the fall of the Berlin wall--but its methods are 2017, from VPNs, proxies, mirrors and encrypted chat to internet surveillance and censorship, bot propaganda and body armor.

Opinion polls show that Catalonia’s independence is supported by 41 percent of its residents, with 49 percent against it, while as much as 80 percent of Catalans are in favor of the referendum itself, most of them believe that the vote should be agreed upon with the central government in Madrid.