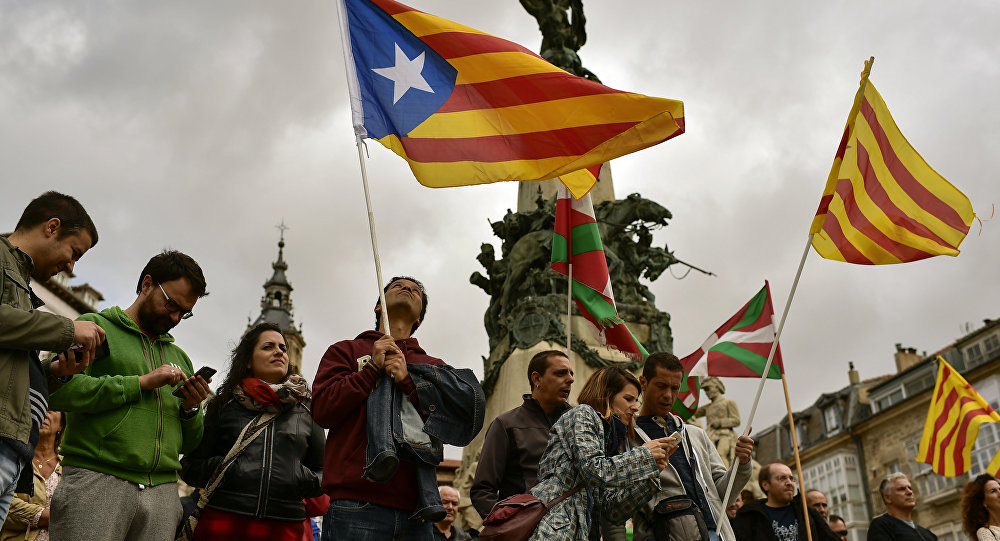 The Office of the United Nations High Commissioner for Human Rights urged Spain to observe the rights of Catalans amid reports on detentions and searches in numerous public agencies, including the local government ahead of the region's independence referendum.

MOSCOW (Sputnik) — Madrid has to observe the rights of the people of the Spanish northwestern region of Catalonia ahead of the region's independence vote, the Office of the United Nations High Commissioner for Human Rights (OHCHR) said in a statement on Thursday.

In early September, Catalonia’s Parliament passed a bill enabling an independence referendum to be held on October 1. Madrid subsequently challenged the motion in the Spanish Constitutional Court, which ruled the plebiscite unconstitutional.

"Regardless of the lawfulness of the referendum, the Spanish authorities have a responsibility to respect those rights that are essential to democratic societies," UN experts, namely special rapporteur on freedom of opinion and expression David Kaye and independent expert on democratic international order Alfred de Zayas, said, as cited in the statement.

The OHCHR argued that Madrid's measures thwart the upcoming plebiscite compromise the democratic process within the country.

"The measures we are witnessing are worrying because they appear to violate fundamental individual rights, cutting off public information and the possibility of debate at a critical moment for Spain’s democracy," the experts added.

The UN human rights office also expressed concern that the situation might significantly deteriorate and called on the parties to the conflict to avoid violence.

Last week, Spain’s Civil Guard carried out a large-scale raid in Catalonia, detaining over a dozen people and searching numerous public agencies, including the local government, Catalonia's Generalitat, in relation to the upcoming independence vote. These actions by Madrid incited mass protests across the autonomous region, which deepened the rift between the central government and the proponents of the independence referendum.