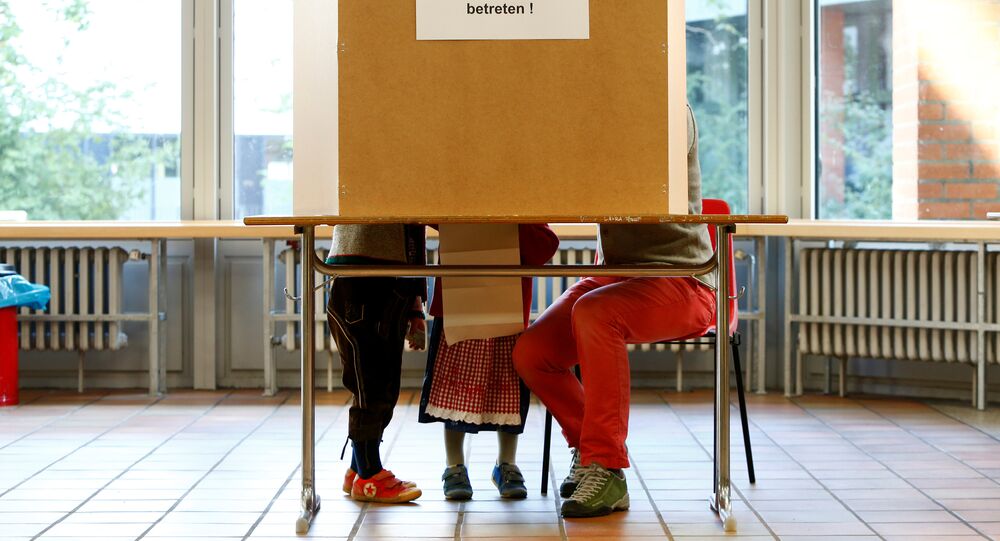 BERLIN (Sputnik) — One of the representatives of the Russian-speaking electorate in Germany comprising some 3 million people, Waldemar from the western district of Charlottenburg, cast his ballot for CDU.

"We traditionally vote for the Christian Democrats because this party is a symbol of stability. Besides, this party under Kohl made our move to Germany possible," he told Sputnik on Monday expressing, however, concerns over German alienation policy toward Russia.

He stressed that the government led by Merkel was a "safe choice" and expressed hope that a new government would carry on a political course aimed at economic growth.

© REUTERS / Fabian Bimmer
Voters enter a polling station during general election (Bundestagswahl) in Hamburg, Germany, September 24, 2017
Elena, who has been living in Germany with her German husband for the last 15 years, told Sputnik that she voted for the Alternative for Germany as she feared Islamization of the German society.

"For me, the crucial issues that influenced my choice were domestic security and Islamization. We all still remember terrorist act [that took place] last December in Berlin. I voted for AfD," she said.

She expressed hope that a strong AfD, which became the third largest party in Bundestag, would influence the country's domestic and foreign policy.

"Among the Russian-speaking German population, Russian wives or the first wave of Russian immigrants, many vote for the Christian Democrats, because for them the CDU is a party of the conservative statesmen, who prioritize stability and the statehood. I believe that an equal number of votes went to the Alternative for Germany and some votes went to the Left party," German analyst Alexander Rahr told Sputnik.

"They have a more critical attitude toward America and a more lenient attitude toward Russia," he said noting that there was indeed a fear of Islamization within this group, which is typical for all countries of Eastern Europe.

Rahr also noted that the election for the Russian-speaking electorate, supporting the improvement of ties between Germany and Russia, unfortunately, "ended in fiasco because the coalition, which is likely to be formed [CDU/CSU, the Greens and the Free Democratic Party], would be the most anti-Russian that one can only imagine."

According to results, the CDU/CSU alliance got 33 percent of votes, the Social Democratic Party received 20.5 percent, while the AfD received 12.6 percent. The Free Democratic Party got 10.7 percent, and the Greens scored 8.9 percent.

Talking With 'Angry Germans': Why Some Have No Interest in Parliamentary Vote