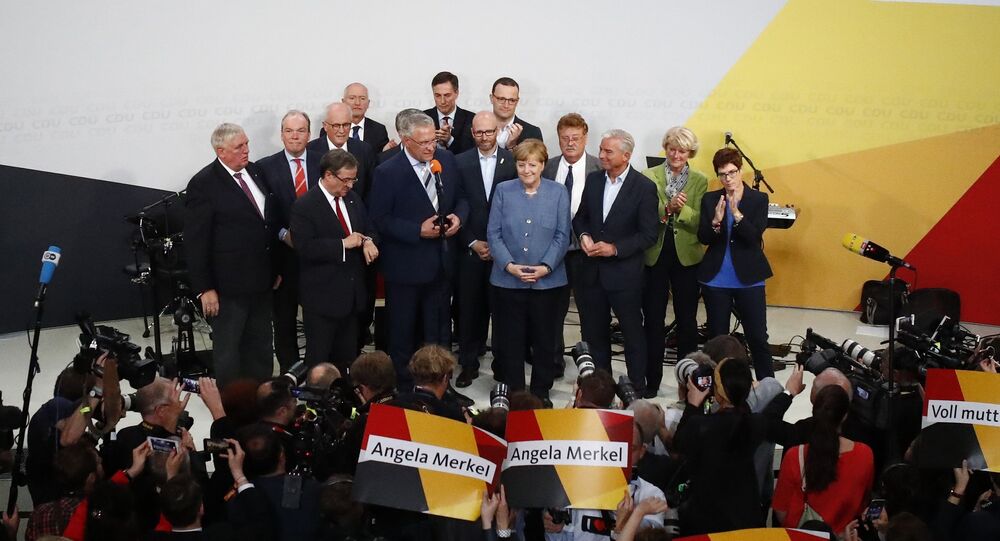 The right-wing Alternative for Germany (AfD) party enters the parliament for the first time ranking third with 12.6 percent. Among other parties who also overcame a 5-percent threshold are the Free Democratic Party (FDP) with 10.7 percent, the Left Party with 9.2 percent and the Green Party with 8.9 percent.

© REUTERS / Michael Dalder
Protesters Allegedly Assault AfD Chairperson's Family in Berlin
The 19th Bundestag will be composed of 709 seats, the Federal Returning Officer said Monday. The new composition of the Bundestag will be increased by 78 seats, compared to the previous one, due to the enhanced position of the minor parties. The CDU/CSU receives 246 seats (instead of 311), SPD gets 153 (instead of 193). AfD enters the parliament with 94 mandates, FDP has 80 seats, the Left Party increases its presence up to 69 seats (instead of 64) and the Green Party up to 67 (instead of 63).

The total voter turnout in the German parliamentary election stands at 76.2%, this is a nearly 5-percent increase from the previous 2013 election, when the turnout stood at 71.5 percent.

Following the results, Merkel faces a task to form a coalition, which will be particularly challenging because of the right-wing AfD's surging into Bundestag, following the failure to win any seats in the previous 2013 election.

Merkel also called the results of exit polls, showing that AfD party is likely to enter the German parliament, "a great challenge" and vowed to fight for the votes of AfD supporters.

On Sunday, the Parliament elections were held in Germany. More than 88,000 polling stations opened across the country. About 61.5 million voters were expected to cast ballots, choosing among six major parties

Merkel May Form Government With Smaller Party After Federal Elections