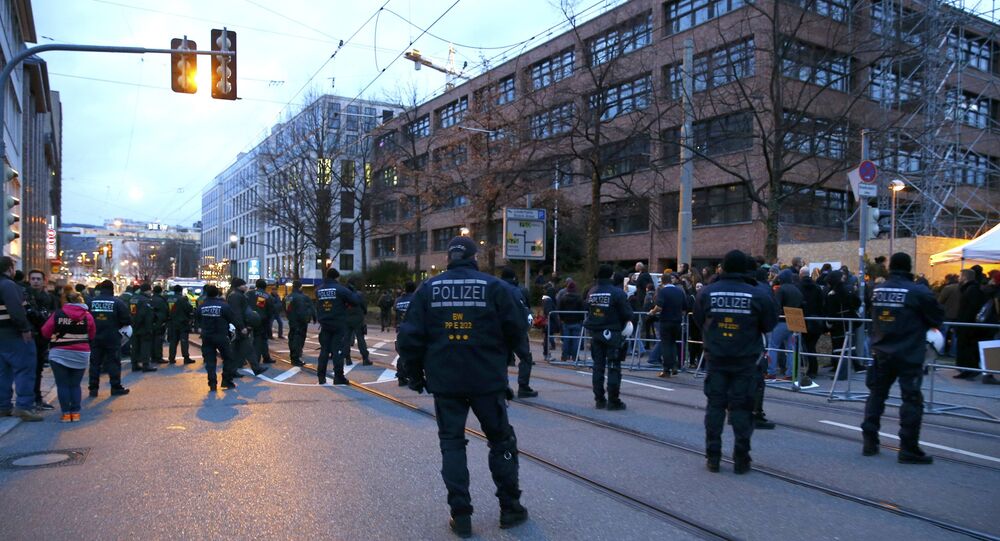 The chairman of the German AfD opposition party, Joerg Meuthen, told Sputnik that his family was attacked by an aggressive crowd during post-election protests in central Berlin.

BERLIN (Sputnik) — The family of the Alternative for Germany (AfD) party chairperson, Joerg Meuthen, was allegedly attacked in central Berlin outside the building where they were holding a post-election event, Meuthen told Sputnik on Sunday.

"My family was attacked. The crowd was shouting insults and throwing things at them," Meuthen said, without specifying what the protesters were throwing, and added that security employees protected his family.

The chairperson noted that he had to change his clothing so as to leave the building unnoticed.

© AP Photo / Martin Meissner
Merkel 'Not Afraid' of AfD Political Breakthrough
According to a Sputnik correspondent, a protest in central Berlin gathered nearly a thousand people. The protesters threw bottles at police although the demonstration ended peacefully.

Rallies against eurosceptic AfD were held on Sunday in a number of other German cities, including Berlin, Cologne, Dusseldorf, Munich, Hamburg and Frankfurt. Hundreds of people have marched through the main streets holding anti-racism banners.

The anti-immigration AfD opposition party marked an unprecedented breakthrough, with nearly 13.5 percent of the vote. After earning seats in the parliament for the first time, the AfD win comes to the first right-wing party in the Bundestag in over 60 years, and marks a stark change from the centrist policies of post-World-War-II German parliaments.