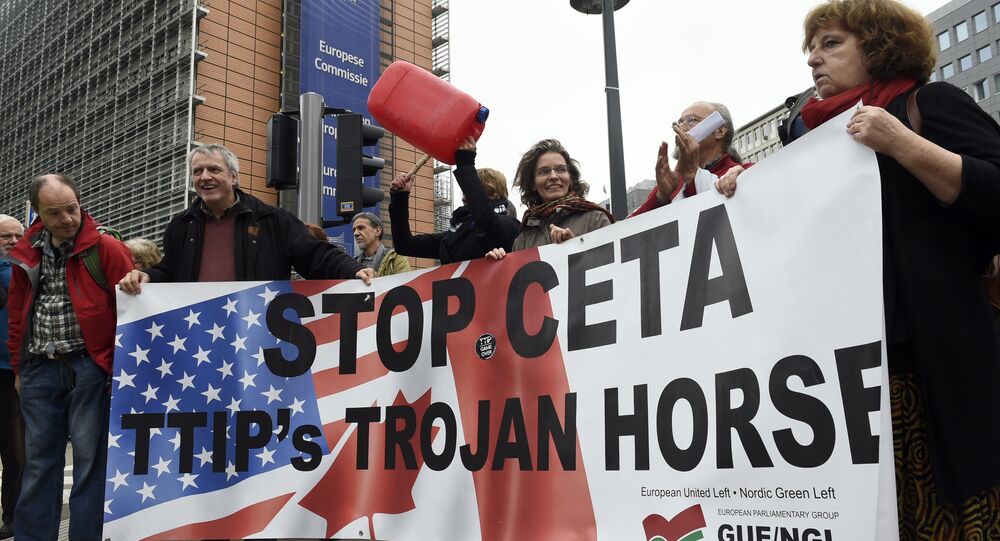 The controversial Comprehensive Economic and Trade Agreement between the European Union and Canada has come into force, troubling campaigners - and a campaigning group has told Sputnik the UK can expect an even worse deal once it leaves the bloc.

Thursday, September 21 marked the provisional entering into force of the Comprehensive Economic and Trade Agreement (CETA) between the European Union and Canada.

CETA may enter provisionally today, but is not over. More than 30 legislatures have to sign on.

​The controversial agreement endured a troubled gestation period, with negotiations commencing in 2009 and terminating in 2014, before Canadian Prime Minister Justin Trudeau signed the official agreement into law October 2016, and the European Parliament approved the deal earlier in February.

© REUTERS / Yves Herman
French Constitutional Council Sees CETA as Compliant With State’s Basic Law
While most of the agreement will apply to EU member states from now on, member state national parliaments must ratify the agreement before it can be fully enforced. Such a prospect is likely years away, as it took over four years for a trade deal with South Korea to be ratified by all EU countries.

It may well be the UK secedes from the bloc before that comes to pass — until then, the provisional version of the agreement will operate in the country, but afterwards the UK will be shorn from the agreement entirely.

​However, its CETA-isolation is not likely to last long — the UK was one of the lead advocates of its implementation, and staunchly opposed to its critics in Brussels and other European capitals. Theresa May has also warmly welcomed its provisional implementation, and suggested a quick recreation of the deal once Britain departs the EU could serve as a model for post-Brexit trade.

Instead, it'll be an "even worse" deal, from the public's perspective, replete with many of the "worrying elements" of CETA that have not been implemented yet, or indeed won't ever be due to EU law.

TODAY #CETA comes into effect. It's worth £1.3bn to Britain & @ConMEPs say we can replicate it after #Brexit > https://t.co/EGsr4Frmkv pic.twitter.com/kekTOwywBK

​"In particular, it's almost certain a UK-specific version of CETA will enshrine corporate courts, which was one of the most alarming aspects for campaigners. Those have been put on hold in Europe, as the European Court of Justice is investigating to see whether they are compatible with EU law. But the UK was one of the keenest proponents of corporate courts in the EU," Ms. Blaylock told Sputnik.

"Corporate courts" effectively grant major businesses personhood, and the ability to sue governments for billions of dollars for policies, regulations and practices that damage corporate profits and business models — under a comparable treaty, Canada itself has been sued 26 times, primarily for trying to introducing better environmental regulation.

If implemented, it would not merely be Canadian companies that could sue Westminster — major US multinationals that operate in the country could do likewise.

On top of governmental support for the measure, Ms. Blaylock feels the UK would by definition have less bargaining power outside the 28-member bloc, and be "much more a rule taker" than giver, and be compelled to accept the demands of other countries. She also suggests official desperation to sign any and every deal with any country that offers one — in order to point to post-Brexit "successes" — could leave the country even more subservient to the wills of other treaty players. Either way, the UK is surely set to have "less bargaining power."

"What's particularly worrying is parliament cannot prevent a trade deal — MPs simply won't be able to amend or stop a new CETA, as the UK's ratification processes are a formality. It's almost impossible to find a procedure through which to make an objection. Parliamentarians will have no say on the process, no right to information on the eventual deal, and no vote on it," Ms. Blaylock told Sputnik.