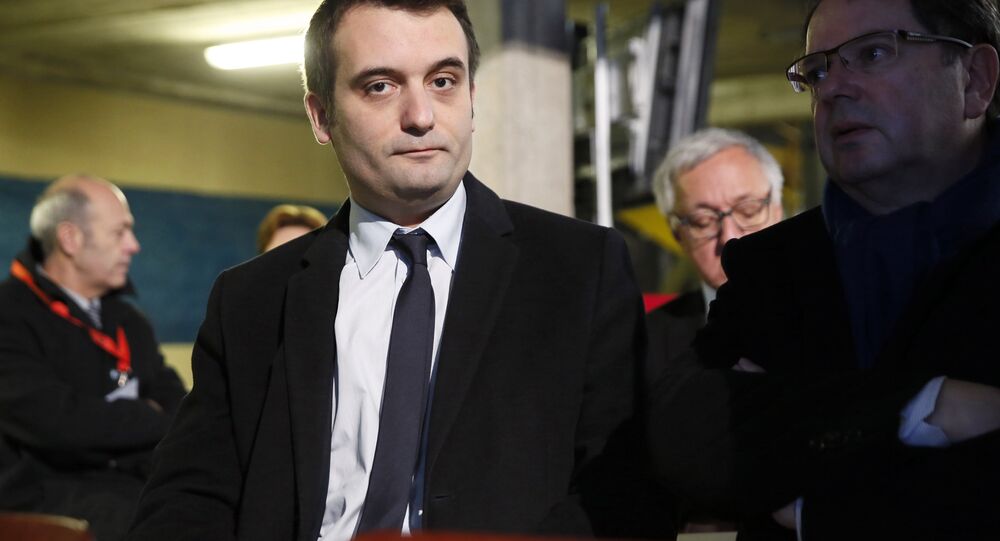 Vice-president of the French National Front party Florian Philippot has left the party over disagreements with the party's head Marine Le Pen.

PARIS (Sputnik) — The closest aide to French National Front (FN) leader Marine Le Pen and the party's vice-president, Florian Philippot, announced on Thursday he would be quitting the party, which has been struggling to outline its new program after Le Pen's defeat in the presidential election.

"They told me I was vice-president of nothing. Listen, I do not want to be ridiculed. I have never had the desire to do nothing, therefore, of course, I am quitting the National Front. I saw things evolving negatively during these past weeks. Maybe in this new project, I will not have my place, so pretexts were needed," Philippot told France 2 broadcaster.

On Wednesday, Le Pen withdrew some certain responsibilities from Philippot, notably the strategy and communication portfolio, after he refused to abandon the presidency of his own political movement, The Patriots. The FN leader nevertheless kept him on as vice-president.

When explaining her decision, Le Pen said it was because of Philippot's "refusal to resolve the conflict of interests caused by his double responsibilities as the National Front's vice-president, responsible for the party's strategy and communication, and his presidency in The Patriots political association."

Philippot reacted to the decision by saying the party would "regret bitterly" and renounced the ongoing re-foundation of the National Front, calling it "a terrifying step back" on its political line.

© CC0 / Pixabay
Cuckooed! How an Undercover MI5 Operative Helped Take Down the National Front
Shortly before losing the second round of the presidential election, Le Pen said the party might be rethinking its position on abandoning the euro. Philippot created his own political movement within the National Front to protect this major point of the party's program.

The divide within the National Front ultimately risks the party's ability to present itself as a major opposition force to French President Emmanuel Macron.