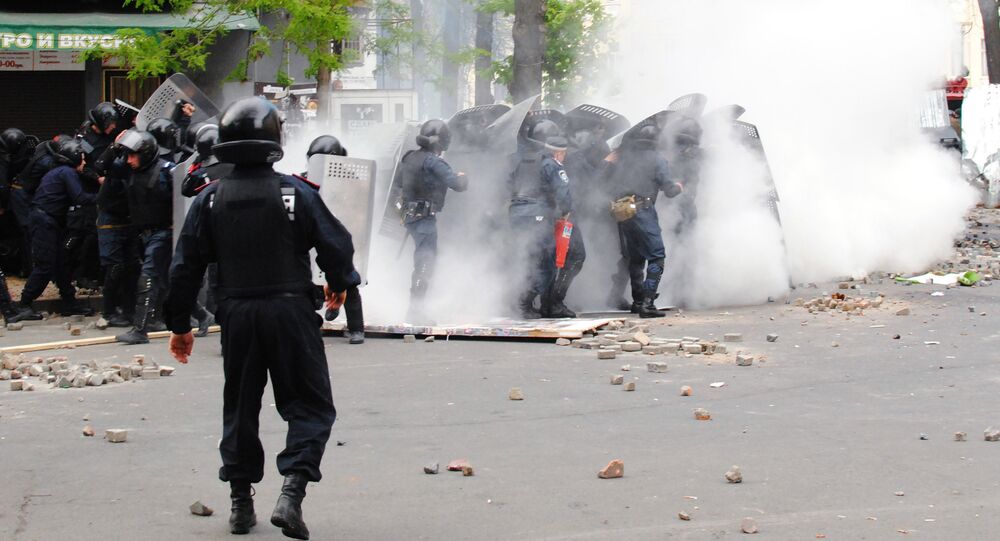 A Ukrainian regional court found on Monday the defendants in the case of deadly riots that occurred in the port city of Odessa in May 2014 not guilty, citing the lack of evidence. However, two of those acquitted were detained again.

KIEV (Sputnik) — Two acquitted defendants of the case into May 2014 clashes at the Hretska Ploshcha (Greek Square) in Odessa were detained over suspected encroachment on the territorial integrity of Ukraine. This came shortly after an Odessa regional court ruled the defendants in the case were "not guilty."

The representatives of the Ukrainian Security Service and Prosecutor General's Office entered the courtroom where the judges were delivering their verdict of acquittal and declared new charges. The journalists were asked to leave the courtroom, Ukraine's Dumskaya media outlet reported.

Nineteen defendants were on trial in connection with the Greek Square riots that killed six people. According to the Timer news outlet, the court only considered the actions of anti-Maidan activists, who were accused of inciting their supporters to violent actions against the participants of the Euromaidan, which led to mass riots.

© Sputnik / Stringer
People in Odessa Commemorate 2014 Massacre Every Month, Call for Justice
​The defendants were found not guilty due to the lack of evidence of a crime on their part, the Timer said, citing the Court's ruling. The investigation has not managed to gather thoroughly the evidence, as a result, some evidence might have been lost. The Court also said that the investigation had failed to identify the weapon used in the murder, to question the representatives of the Ukrainian football fan movement, so-called ultras, and law enforcement officers, many of whom were wounded during the riots.
© AFP 2021 / GENYA SAVILOV
Rally in commemoration of Odessa victims
In 2014, following the coup in Ukraine, anti-Maidan activists set up a tent camp in Kulykove Pole, Odessa's central square. On May 2, 2014, a scuffle between anti-Maidan activists from the one side and Ukrainian football ultras from Kharkiv and Odessa and Euromaidan radicals on the other side took place at the Greek Square, that claimed lives of six people. Two of the victims are considered to be Euromaidan activists, while four others were anti-Maidan activists. According to the official information, 15 people were injured in the clashes.
...
Reddit
Google+
Blogger
Pinterest
StumbleUpon
Telegram
WhatsApp
02
Tags:
riots, ruling, clashes, court, Ukraine, Odessa
Community standardsDiscussion