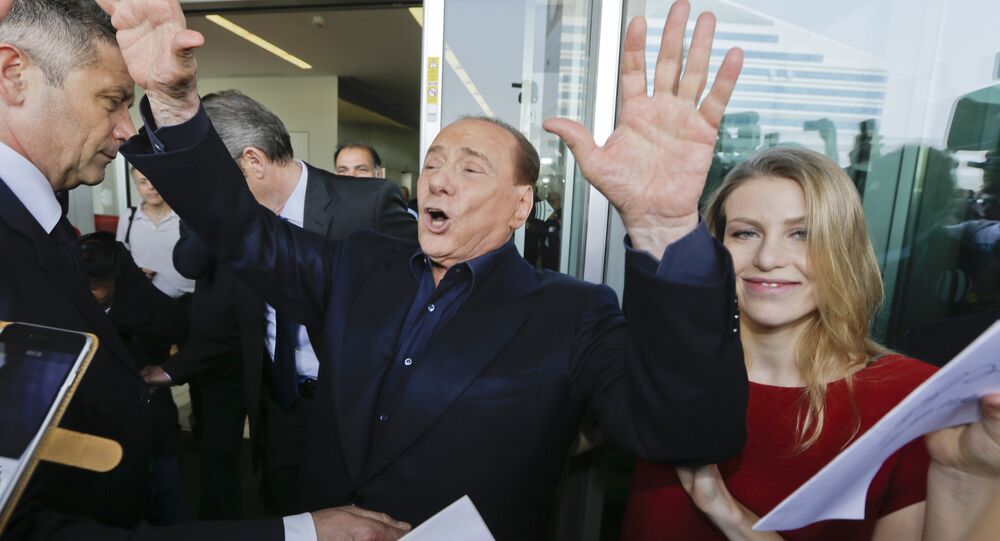 Silvio Berlusconi, the four-time former Prime Minister of Italy, has made a formal return to mainstream politics, setting out his party's election platform - although whether legal restrictions barring him from running for office will be lifted isn't certain.

Former Italian Prime Minister Silvio Berlusconi has made a formal return to Italy's political stage, laying out his policy priorities at a September 17 meeting of his Forza Italia (Go Italy) party, portraying himself as a pro-European moderate.

Berlusconi said he wanted to lead the group into the national ballot, which must be held by March 2018, promising sizeable tax cuts if a center-right government regained power.

© AP Photo / Luca Bruno
Is Bunga Bunga Berlusconi Back? Silvio, 80, Wants to Lead Italy's Right Wing
In some quarters controversial, in others beloved, Berlusconi exited Italian politics in 2011 due to a number of scandals, and remained largely invisible for years afterward. However, "Il Cavaliere" has come cantering back to the frontline, and Forza Italia, with its traditional rightist allies the Northern League and Brothers of Italy, have combined backing of around 35 percent, according to polls, which could make them the largest single bloc in the Italian parliament.

While Berlusconi predicted a "great victory" for the center-right, the surprisingly sprightly 81-year-old cannot run for office due to a 2013 tax fraud conviction.

He expressed hope the European Court of Human Rights would overturn the ban and "completely restore [my] honor" when it reviews his case in November. However, he pledged to take part in the election campaign "court or no court."

Berlusconi dismissed the chances of the ruling center-left, saying the left was in retreat across Europe, and also took aim at the anti-establishment 5-Star Movement, which polls say is Italy's largest single party, with support under 30 percent.

The 5-Star Movement is expected to choose MP Luigi Di Maio as its prime ministerial candidate — Berlusconi dismissed him as a "little political meteorite" with no practical expertise.

Highlighting his own long experience in business and politics — he has served as Prime Minister on four separate occasions — he suggested his party wouldn't support fellow right-bloc Northern League leader Matteo Salvini's bid to become prime minister who has put himself forward as the natural prime ministerial candidate for the center-right.

"We have always had respect for their ideas, but we created the center-right and we have always been the leader to put its program into action," Berlusconi said.

It clearly remains questionable whether perma-tanned Berlusconi will be legally eligible to run for office in the next election. However, what's perhaps not up for debate is the octogenarian has revitalized the fortunes of the center-right in Italy ever since his return to frontline Italian politics.

© AFP 2021 / GIUSEPPE CACACE
Italy's Berlusconi to Leave Hospital After Heart Surgery on Tuesday
Forza Italia's polling fortunes have resurged over 2017, having hit a nadir in 2016 (although its current standing is far removed from 2008, when the party secured 38 percent of the vote independently).

While it was received wisdom until relatively recently that the movement was a spent force, evidently green shoots of recovery are beginning to show — and Berlusconi may be largely responsible.

It's not merely in opinion polls the party has recuperated. In June, center-right parties scored a string of decisive victories in mayoral elections across Italy. Most notably, in Genoa, a city that had had a center-left mayor for over 50 years, Berlusconi's personally backed candidate won with over 55 percent of the vote.