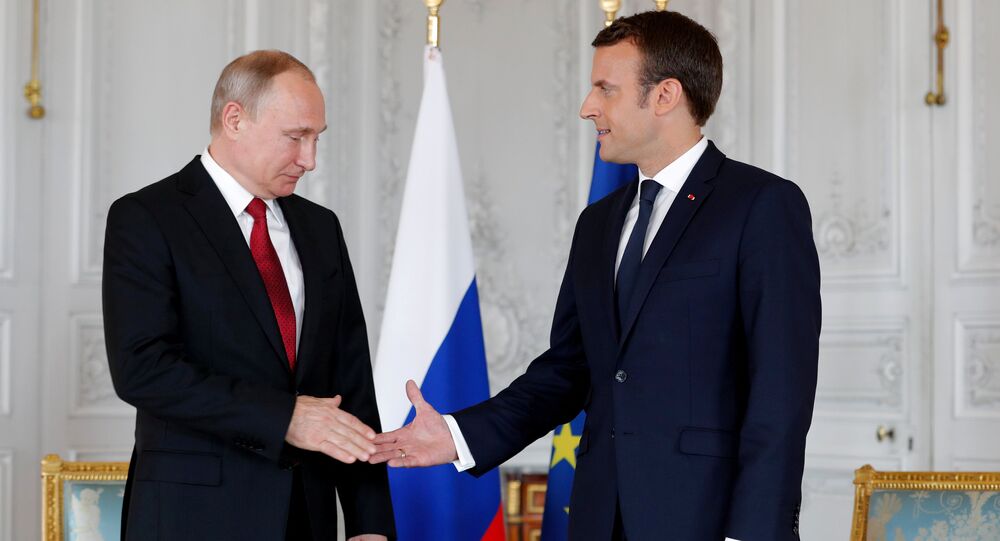 Russian President Vladimir Putin and French President Emmanuel Macron in a phone call discussed the Ukrainian crisis, implementation of the Minsk agreements, deployment of UN peacekeepers in Donbass among other global issues.

MOSCOW (Sputnik) — Russian President Vladimir Putin called on French President Emmanuel Macron to support Russia's initiative on the establishment of a UN mission to protect the Organization for Security and Co-operation in Europe's Special Monitoring Mission (OSCE SMM) in the southeast of Ukraine, the Kremlin press service said Friday.

"The developments in the Ukrainian crisis have also been discussed. [They] have noted the importance of the conflicting parties' full and scrupulous implementation of the agreements reached, including so-called 'school ceasefire,' agreed by the contact group and brokered by leaders of Normandy Four member states. Vladimir Putin called on Emmanuel Macron to support Russia's initiative on the establishment of the UN mission to protect the OSCE Special Monitoring Mission in the southeast of Ukraine," the press release read.

The two leaders also agreed to enhance cooperation on bilateral and global issues.

"It was agreed to intensify contacts on international and bilateral agenda, at the top and other levels," the press release read.

However, Kyiv insisted that the mission should patrol the whole conflict zone including the Ukranian-Russian border.

Both Leaders also condemned Pyongyang's provocative actions and agreed on the inadmissibility of further escalation of tensions on the Korean Peninsula.

"In the context of the situation on the Korean Peninsula, the leaders have firmly condemned the provocative actions made by the DPRK, which flagrantly violate the relevant resolutions of the UN Security Council. Such actions contradict the principles of global non-proliferation and pose a serious threat to regional peace and security," the statement said.

"The heads of the states agreed that further escalation of tensions on the Korean Peninsula, that could lead to irreparable consequences, was unacceptable, and that the settlement of this extremely complicated situation should be achieved only through political and diplomatic means, via the resumption of direct negotiations," the statement read.