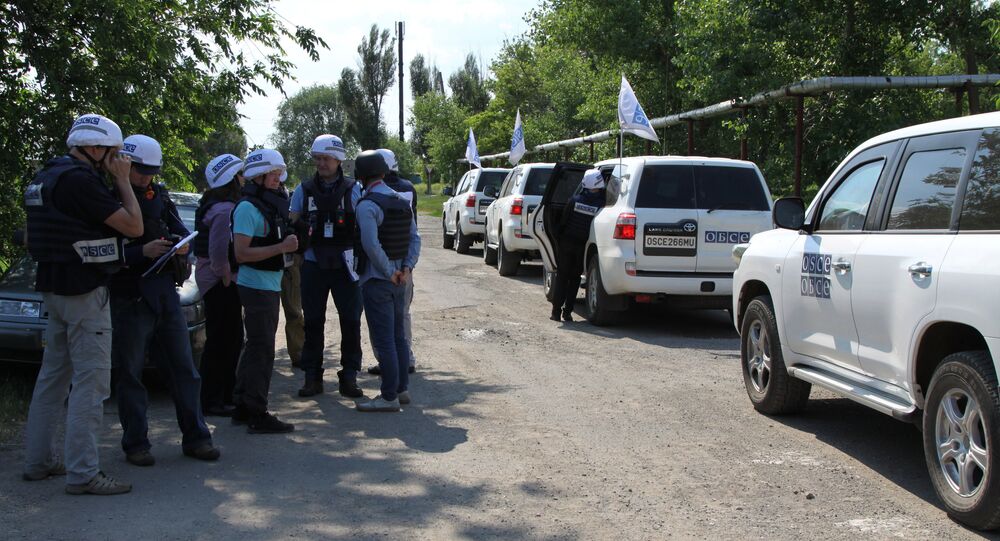 German Foreign Minister Sigmar Gabriel views an idea of sending UN mission to the eastern Ukraine as a chance to talk about detente with Russia.

BERLIN (Sputnik) — German Foreign Minister Sigmar Gabriel believes that sanctions against Russia may be loosened in case of successful implementation of the initiative on deployment of UN peacekeepers to eastern Ukraine.

Gabriel pointed out that earlier this week, the issue of peacekeepers' deployment had been discussed by German Chancellor Angela Merkel and Russian President Vladimir Putin.

"Now we need to quickly launch negotiations in New York [UN]. In case of talks success and if we can implement [the plan] quickly, we should also move to easing of the initial sanctions [against Russia]," Gabriel told Spiegel Online in an interview published on Thursday.

Gabriel added that "a year and a day ago" he had proposed easing anti-Russian sanctions in case of a phased implementation the Minsk agreement.

© Sputnik / Sergey Averin
UN Peacekeepers' Deployment in Donbass May Prevent Kiev's Provocations - DPR
"It is pretty unrealistic to say that other steps will follow only when the Minsk agreement is fully implemented," he stressed.

However, Kyiv insisted that the mission should patrol the whole conflict zone including the Ukrainian-Russian border.

Kiev launched a military operation in the east of Ukraine in 2014, after local residents refused to recognize the new government that came to power then. The ceasefire agreement was reached in Minsk in 2015, brokered by the leaders of the Normandy Four group, but the situation has remained tense.

The European Union and the Unites States imposed sanctions against Russia in 2014 over its alleged involvement in the Ukrainian conflict and extended them several times. Moscow has repeatedly denied all allegations and introduced retaliatory restrictions on food import.