The head of the French UNSA labor union blamed the impending new French president's economic policy in an interview with Sputnik amid ongoing massive protests in the country. The senior union activist admitted that the planned reform indicates the state’s willingness to totally undermine employee rights by giving preference to enterprises.

"In the decree we see that the government thought about the enterprises first, giving more rights to them and to the heads of these enterprises, which makes the inequality between them and their employees grow," Luc Berille said.

The new labor law will make it easier for companies to lay off staff and cut overtime payments https://t.co/xlYpJ7xuXB #Macron #CGT pic.twitter.com/JG1GN8nKyO

Berille explained that the reform included concrete measures to facilitate layoffs, while the possibility to legally contest an employee's dismissal was made more difficult. The official stressed that "dismissals without a reason do not respect the law."

© AP Photo / Christophe Ena, POOL
'Macron's Victory is Good, But Not Enough': France Awaits Economic Reforms in Labor Market
He said that the French labor reform falls within the general trend shared by today’s European political elite which aims to remove all the constraints for enterprises, so that they could adapt more easily to economic realities and thus hire more employees. However, such measures often yield the opposite results.

"Although what we have seen in other states who did it, is that sometimes it can have an impact on employment, but very often the effect is in the weakening of the labor market by switching to temporary or short-term contracts. A lot of countries who did it had to fight poverty," Berille pointed out, adding that the current text of the legislative amendments to the French labor code was "unbalanced."

The UNSA does not share Macron’s beliefs that the liberalization of the labor market through cutting the rights of employees will automatically launch a job creation mechanism, Berille added.

"We believe that the real key to create jobs is not in the labor code. It is firstly economic activity, which will give the enterprises the markets they now do not have," Berille concluded, adding that another labor code reform was not necessary in France, which had already seen four labor laws amended over the past three years.

Michel Beaugas, the secretary for employment at Force Ouvriere (Workers’ Force) trade union, also agreed that it was not the labor code that negatively affected the enterprises in France but the economic situation, the lack of economic visibility and of skilled workers.

"President Macron is pushing forward this reform, in my opinion, to show to the European Union that France is capable of reforms, even though in France we have lots of reforms, including of the labor law. The intention is to bring it closer to other European labor laws, including that of Germany," Beaugas explained. 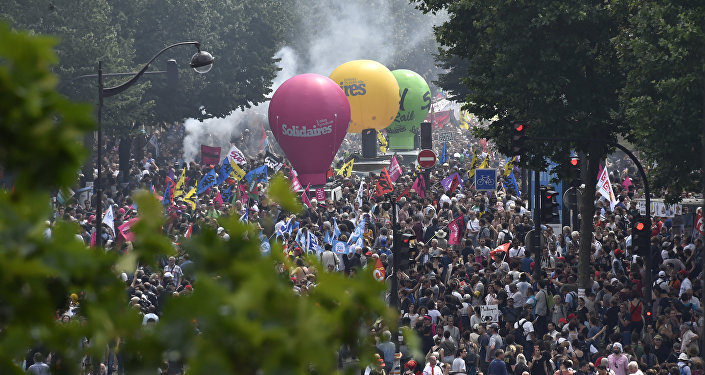 © AFP 2019 / ALAIN JOCARD
People Protest in Paris Against Macron's Planned Labor Reform (VIDEO)
Beaugas stressed that the Labor Court procedures, the cap on damages and provisions regarding the firing process stipulated in the legislation are concerning.

France's second-largest trade union General Confederation of Labour (CGT) is holding a one-day strike on Tuesday to protest against the government-proposed labor reform. Thousands of protesters also took to the streets in defiance of the labor code changes.

The reform was unveiled by the French government in late August. The measures are aimed at stimulating the French economy, simplifying the procedures of hiring and firing workers and allow some workplace issues to be negotiated directly at the company level. The policy has prompted criticism from the French trade unions as shifting the balance of power from workers to employers.