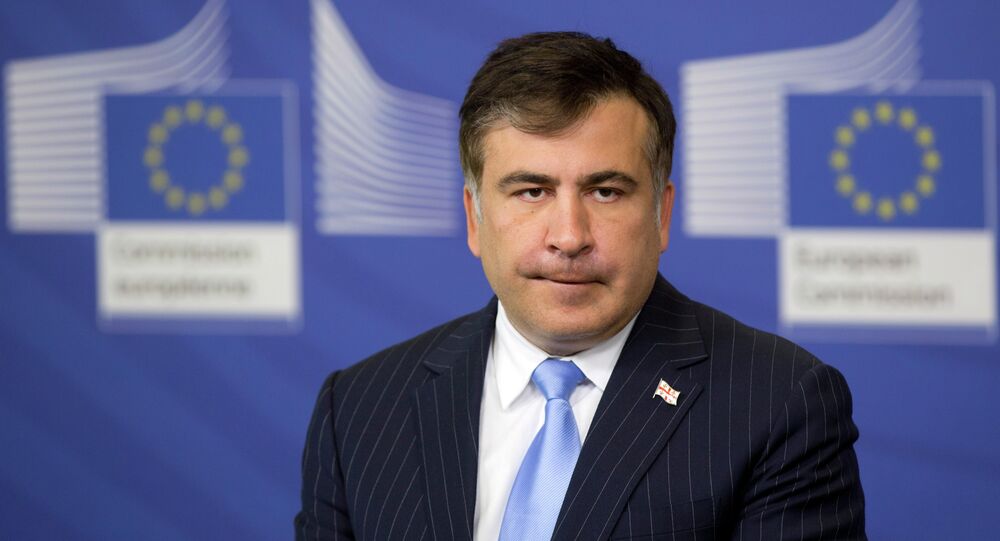 According to Polish Foreign Minister Witold Waszczykowski, the incident on the Ukrainian border with Mikheil Saakashvili is a example of Ukraine playing a "political game."

The Polish Foreign Ministry told Sputnik that Warsaw initially pursued cooperation with the Ukrainian authorities in the border incident with Saakashvili.

"The Foreign Ministry had initially sought cooperation with its Ukrainian partners to sort out the situation with Mikheil Saakashvili's intention to return to Ukrainian territory," the statement read.

On Sunday, Saakashvili forced his entry to the territory of Ukraine with the help of a crowd of his supporters after he had been asked to leave a train at a railway station in the Polish town of Przemysl. Then he headed to the western Ukrainian city of Lviv. The Ukrainian authorities have already accused the politician of illegally crossing the country's state border.

© Sputnik / Nikolai Lazarenko
Former Georgian President Added to Ukrainian Website's Database of 'Enemies of Ukraine'
The ministry also confirmed to Sputnik that Kiev did not summon Ukraine's Ambassador to Poland Andrii Deshchytsia over the incident.

On July 26, Ukrainian President Petro Poroshenko revoked Saakashvili's Ukrainian citizenship, when it was discovered that the latter had violated Ukrainian law by providing incorrect information on his citizenship application. Saakashvili was in the United States at the time and said he would appeal the decision of the Ukrainian president in court. The politician also repeatedly stated that he would return to Ukraine.

Saakashvili Plans to Return to Ukraine From Poland in September