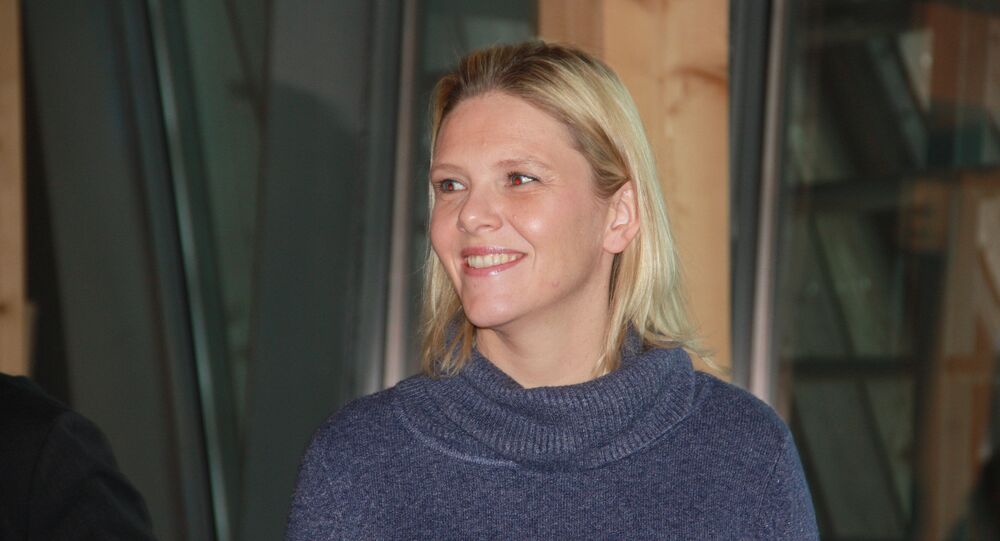 The leader of a local Muslim organization in Norway created a stir by refusing to shake hands with the nation's female immigration minister at the start of their TV debate, epitomizing the collision between European values and those of traditional Islam and possibly affecting the outcome of the Norwegian general election.

Norway's controversial Immigration and Integration Minister Sylvi Listhaug has once again become the focal point of the local press. This time, though, she found herself on the receiving end of a media scandal, as Fahad Qureshi, founder and leader of the organization Islam Net, notoriously refused to shake hands with her before a TV debate on VGTV.

Sylvi Listhaug entered the studio and after first shaking hands with the male host extended her hand to Qureshi, who instead of returning the handshake handed her a bunch of flowers. In an awkward scene, Listhaug kept offering her hand, but the Muslim man demonstrably refused it, instead putting his own hand to his heart.

Meanwhile, the figurehead of the Norwegian Progress Party, who had previously spited local Muslims by claiming eating pork and drinking alcohol to constitute traditional Norwegian values, is not the first woman to receive special treatment from the Islam Net leader. Islam Net, which has hundreds of members, is known for separating its audience by gender at public meetings.

© AFP 2021 / PHILIPPE HUGUEN
'Wardrobe Malfunction': Islamic Council Norway Hires Niqab Backer to Top Role
In another incident which obviated the cultural divide between his followers and the majority of modern Europeans, Qureshi refused to distance himself from the stoning of homosexuals. When directly confronted by Listhaug about this matter, Qureshi first answered in a non-committal way, claiming that everyone must comply with the laws of the country they live in and then refusing to discuss the matter altogether. In 2013, the Islam Net leader openly expressed his support for the execution of homosexuals and adulterers, arguing it constituted 'proper' punishment upon which 'all normal Muslims' agreed.

Update: Mr. Qureshi has requested that Sputnik add his current point of view which has changed since 2013. His reply can be found below:

In an email to Sputnik, the Islam Net leader pointed out that "he now believes the Islamic penal code has so many strict criteria that must be fulfilled" and that "in reality, it will more or less never be applied." According to Qureshi, the penal code exists to "deter people from coming near adultery." Regarding homosexuality, he noted that he had realized that there is no "consensus in Islam on the capital punishment for the act of homosexual intercourse." Qureshi concluded that he is not advocating for the death penalty to be applied.

Islam Net is a Sunni Muslim organization in Norway, founded in 2008 by engineering student Fahad Qureshi. With local chapters in Oslo, Akershus, Tromsø and Bodø, it has over 1,400 dues-paying members. The organization is chiefly aimed at students to promote Islam and "solve misunderstandings about it."

Qureshi infamously tore up a copy of France's Charlie Hebdo magazine after a terrorist attack on its staff, saying that while he condemns the attack, he also believes the journalists had violated his freedom of speech by mocking the Prophet Muhammad.

Due to the timing of this handshake row, which occurred before the September 11 Norwegian general election, it is expected to impact the Progress Party, which is currently part of the government alliance. In past weeks, the anti-immigrant Progress Party was estimated to have received a boost of popularity off Sylvi Listhaug's heated immigration debate with Sweden, which she used as a bogeyman example of failed integration, to her voters' delight.

Last year, a Swedish school principal found it "discriminatory" when a female Muslim teacher refused to shake hands with her male colleagues for reasons of faith. The young women reportedly quit her job after being told that handshaking with colleagues was obligatory, but reported the incident to the country's equality ombudsman.

In yet another case, a refusal to shake hands with a female reporter cost senior Swedish Green Party member Yasri Khan his post. Following the media outrage, Yasri Khan decided to withdraw his candidacy for the Green Party Board and quit politics altogether.

Shaking hands (and touching) members of the opposite sex when not related, is not permissible for Muslims according to the teachings of Islam. According to various assessments, the number of practicing Muslims in Norway, a nation of 5.2 million, is estimated at around 3.8 percent.

Update 2: In response to this article, Mr. Qureshi shared with Sputnik his perspective on the handshake incident:

"Regarding the handshake, I greeted Listhaug with all respect and reverence and gave her flowers, but I was not accepted as Norwegian unless I defied my religious beliefs that do not allow a Muslim to have physical contact with the opposite gender.

"Being unable to respect that other people have certain limitations due to their religion, especially when you are a minister of integration, is very problematic. One sends a signal of cultural supremacy, which is not an unknown phenomenon in racist ideology.

"I believe that we need to respect each other’s limits and look at the other person’s intentions behind their actions. Not touching the other gender is not related to supremacy, it is – from an Islamic point of view – related to honoring the other gender’s dignity and value. Islam teaches me to honor the other gender so much, that I am not even allowed to touch a woman except in the case of my wife and female family members. So, I find it sad that a gesture that has such a beautiful intention behind it is [portrayed] in such a negative way."