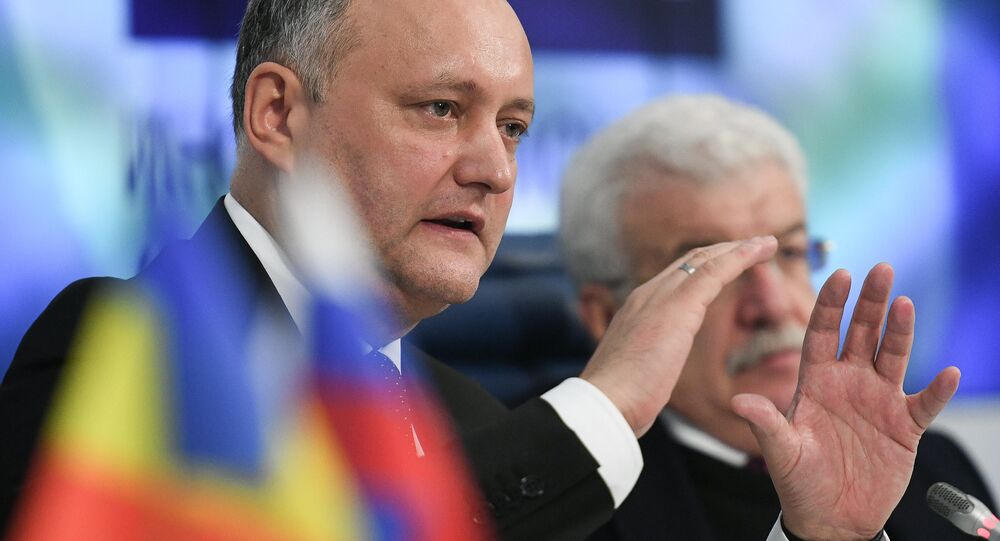 Moldovan President Igor Dodon is demanding the resignation of Deputy Defense Minister Gheorghe Galbura for defying a presidential order to block the deployment of Moldovan troops to Ukraine to participate in NATO-led military drills. Speaking to Sputnik, regional expert Boris Rozhin warned that the country is on a path to a constitutional crisis.

The Moldovan government approved sending several dozen troops to Ukraine last week, ignoring Dodon's decree to block the deployment. Dodon described the move as an 'usurpation of power' by the cabinet.

Speaking to Radio Sputnik about what's likely to happen next, Boris Rozhin, an expert at the Center of Military-Political Journalism, said that the Moldovan government will be likely to try to ignore or challenge the president's demand for Galbura's resignation.

"This confrontation over sending the military abroad is an indication that the constitutional crisis in Moldova is deepening," the expert said. "The parliament and the government are refusing to recognize the president's authority as commander-in-chief to give orders to the country's armed forces."

© Sputnik / Miroslav Rotar
Dodon Pledges to Prevent Escalation of Conflict in Transnistria
"This issue will be considered at a meeting of the country's Security Council, and most likely, by the constitutional court, as Dodon's decision to dismiss the deputy defense minister will either be ignored or contested," Rozhin added.

The expert believes that this confrontation between the branches of Moldova's government is likely to continue until the next parliamentary elections, tentatively set for November 2018.

"The confrontation can be resolved through a decision of the constitutional court, which confirms or rejects Dodon's right to issue orders to the Armed Forces, or deepen further and continue until the next parliamentary elections," Rozhin said.

"After that, a reformatting of the legislature may take place. At the moment, the ruling establishment does not reflect the alignment of forces in Moldovan society, which has grown tired of the government's push for European integration, which did not bring the hoped for economic and social improvements for ordinary people."

© Sputnik / Ruslan Shalapuda
Moldova Steadily Inches Towards Disaster - Ex-President
As the constitutionally designated commander-in-chief, Dodon vetoed the government's decision to send 57 National Guard troops to Ukraine for NATO exercises, reminding them that Moldova is a neutral state. Ignoring the president's order, the contingent left for Ukraine anyway. The president also signed a decree which said that Moldovan military forces would not be allowed to be sent abroad for military exercises, training or any similar events without approval from the president.

The present crisis is not the first public conflict between Dodon and the cabinet o ministers. Earlier, the government asked the UN General Assembly to consider the removal of Russian peacekeeping troops from the breakaway republic of Transnistria. Dodon called the initiative an "empty PR move." The president and the cabinet have faced off over Russia repeatedly, the government proposing a series of unfriendly gestures, with the president, in turn, saying that he would like to bring the country closer to Moscow.

Commenting on the political situation in the country, political observer Viktor Marakhovsky wrote that it would be more correct to call Dodon 'pro-Moldovan' than 'pro-Russian', because the pro-EU elites he is up against have effectively "privatized political power in exchange for international grants, figuratively speaking." Not only do they seek to give up sovereignty to EU structures; some have spearheaded a campaign pushing for Romania's absorption of Moldova, a campaign actively supported by Bucharest.

© Photo : Facebook / Ministerul Apărării al Republicii Moldova
'The World Belongs to Them': Moldova Becomes a 'Foothold for US Expansion Into Eurasia'
Marakhovsky thinks that Dodon's best hope will be to organize a referendum to ask Moldovans to approve the expansion of the president's powers, fresh elections and returning the subject of the history of Moldova to the country's schools, replacing 'the history of Romania' subject presently being taught.
...
Reddit
Google+
Blogger
Pinterest
StumbleUpon
Telegram
WhatsApp
56
Tags:
politics, dual power, constitutional crisis, Igor Dodon, Moldova
Community standardsDiscussion