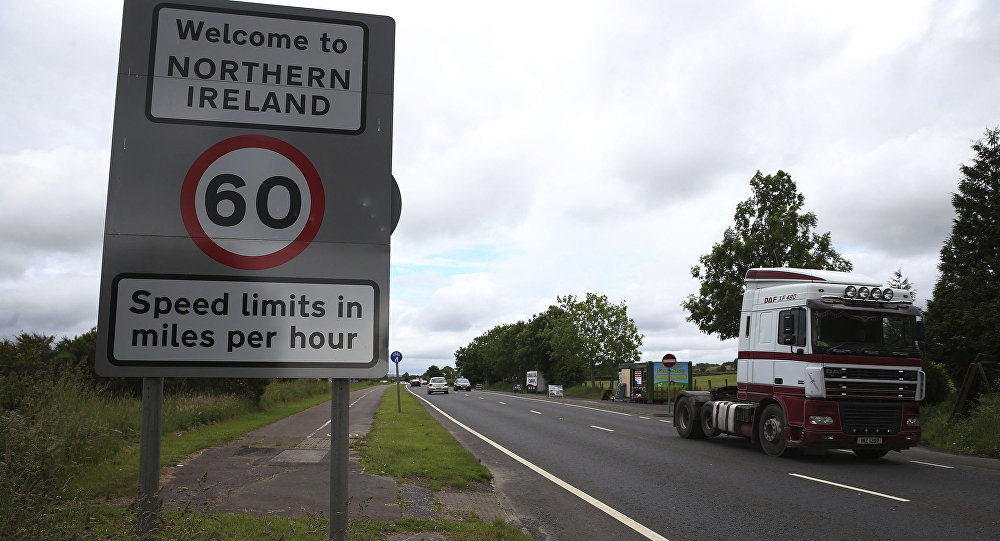 The UK government urgently needs to come up with a post-Brexit plan for the border between Northern Ireland and the Republic of Ireland, which is a vital part of the peace process there, Dr. Cathal McCall, a politics and international studies professor at Queen's University Belfast, told Radio Sputnik.

While the UK as a whole voted to leave the EU in last year's Brexit vote, in Northern Ireland the vote was 56% to 44% in favor of remaining in the bloc. The Northern Irish border is currently an internal EU border where people and goods move freely, but Brexit requires that the UK impose physical borders with its neighbors.

"The UK's exit from the EU is creating a very difficult situation for the island of Ireland," given the history of sectarian conflict in Northern Ireland and the importance of an open border to the peace process and the island's interconnected economy, Professor Cathal McCall, Professor of European Politics and Borders at Queen's University Belfast, told Radio Sputnik.

The UK needs to start proposing "concrete suggestions and potential solutions" with regard to border arrangements that would enable continued market integration and the freedom of movement that allows 30,000 commuters per week and 2 million vehicles per month to cross the border, McCall said.

"All of that needs to be addressed and the solutions are really pressing now … Michel Barnier, the Commission's Brexit negotiator, has actually been to the Irish border and has spoken to people. His counterpart in the UK government, David Davis, has not been and shows very little interest in this."

"This open Irish border has been with us for 2 decades, since the Belfast Good Friday agreement, and it is an integral part of the peace process. It's very important for so-called Irish nationalists on this island, and approximately 45% of the population in Northern Ireland belongs to that community so it's really important to have that connection."

© REUTERS / Clodagh Kilcoyne
Brexit: Northern Ireland 'Could Get Hard Border by Default' Despite Pro-EU Vote
The Irish border was created with the country's partition in 1921, which ended British rule in 26 counties of Ireland and established the Irish Free State south of the border. During the period of violent conflict between loyalists and nationalists known as "the Troubles" in Northern Ireland, there were just 20 border crossings, overseen by British military checkpoints.

However, following the 1998 Good Friday Agreement which set up a cross-community system of power-sharing in Northern Ireland, the checkpoints disappeared, and the number of border crossings has increased to more than 200, as roads were reopened.

Many local people live and work on different sides of the border and many sectors of the economy have become deeply connected. For example, 40% of chicken produced south of the border is processed in the north. One of Ireland's most famous exports, Guinness, is sent north of the border to be bottled or canned before returning to Dublin for export.

© REUTERS / Pascal Rossignol
'Very Hardcore Line': Leaked Brexit Paper Aims to Slash Immigration From EU
Since the Brexit vote, some pro-remain groups have held demonstrations at the border in protest at the prospect of a re-instated physical border and there is fear that the sectarian conflict could be re-ignited.

"We're already seeing mobilization, we don't want that to spill into major demonstrations, agitation when security forces possibly become involved. It's a fragile enough situation and all of the uncertainty surrounding the British government's position [is] destabilizing the border as an issue."