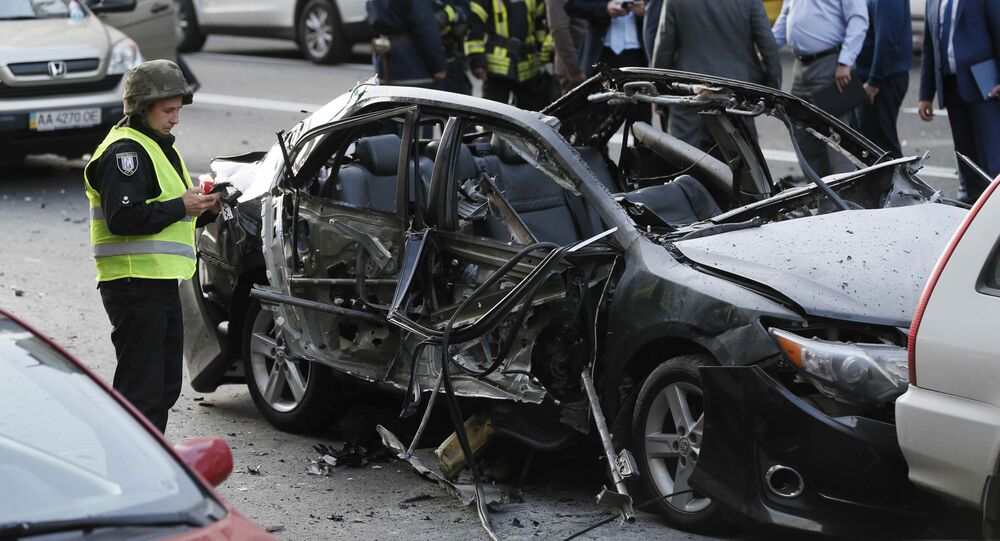 Ukrainian investigators have found out that the car that exploded in central Kiev on Friday was packed with the equivalent of up to a kilogram of TNT, Adviser to Ukrainian Interior Minister Zoryan Shkiryak said Saturday.

KIEV (Sputnik) –  The explosion of a Toyota Camry in the center of Kiev on Friday killed one person and injured two other citizens. Ukrainian Interior Ministry spokesman Artem Shevchenko said the deceased man, Ali Timaev, was "well-known in criminal circles." According to the press service of the Ukrainian security service, Timaev was a native of the Russian Chechnya region, and he participated in the 2008 Georgian conflict.

"According to the experts’ preliminary information, the explosive device had a power equivalent ranged between 600 grams and one kilogram of TNT. All the necessary investigative actions are underway, the circumstances of the case are being clarified," Shkiryak told the 112 Ukraine TV channel.

© Sputnik / Alexei Furman
Ukrainian Security Service Finds Arms Cache in Kiev Park
Shkiryak noted that the law enforcement agencies were considering all possible versions with regard to the crime, including assassination, personal grudge. He added that Timaev’s participation in Kiev's military operation in Donbas could also be a reason behind the blast.

On Friday, the press service of the country’s national police said the explosion could be qualified as a terrorist attack. Following the blast, the Interior Ministry informed that the police had increased patrols of Kiev’s center and metro.

This was not the only explosion that hit the Ukrainian capital in recent weeks. An unknown object exploded in the center of Kiev on Ukraine's Independence Day, leaving at least two people injured.

Coal Mine Explosion Kills at Least 10 in West Ukraine