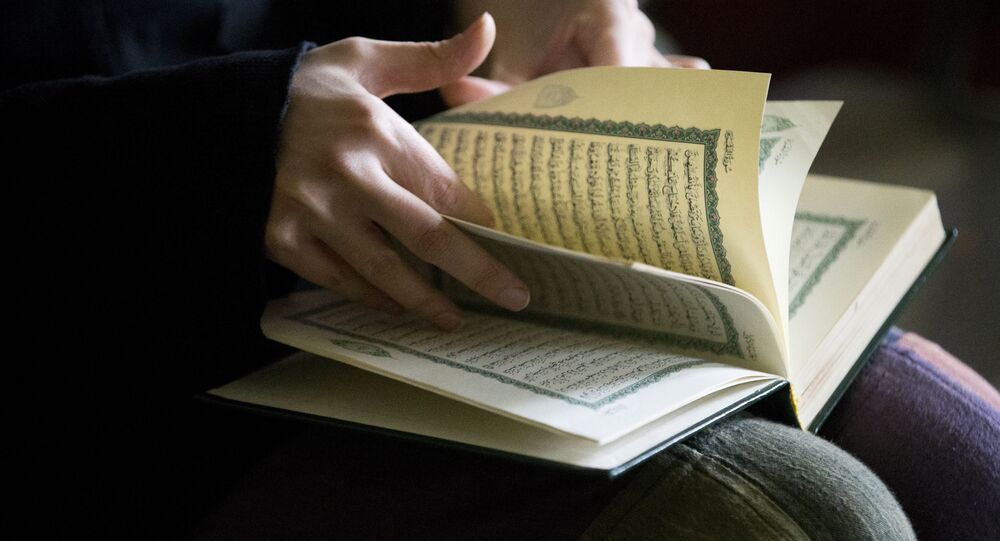 The Sweden Democrats (SD), the only party effectively opposing mass migration from Muslim countries, is often portrayed as 'racist' in Swedish media, yet enjoys rising popularity despite being labeled 'pariahs.' An SD heavyweight recently shocked Sweden's liberal press once again by comparing the Quran to Adolf Hitler's 'Mein Kampf.'

The shocking comparison between Hitler's 1925 autobiography 'Mein Kampf,' and the Quran, the central religious text of Islam, was made by SD parliamentary group leader Mattias Karlsson at an internal party meeting dedicated to the upcoming election to the Church of Sweden on September 17, in which the SD is represented by about 1,000 candidates.

In his speech at Gothenburg Concert Hall, Mattias Karlsson stressed the importance of "reclaiming" the Church of Sweden, which he claimed to have become a "force of Sweden's Islamization."

Karlsson particularly lashed out against the practice of inviting imams to Swedish churches and allowing them to read out loud from the Quran, which he called "absurd," the Swedish newspaper Expressen reported.

"I would like to go as far as to say that reading out from the Quran in a Christian church, while parts of the Quran advocate the killing of Christians, is almost comparable to reading out from 'Mein Kampf' in a synagogue," Mattias Karlsson said to his party mates.

"I believe those who support this kind of action, those who approve of it, should be ashamed and kicked from their posts," Mattias Karlsson said and was met with applause.

In a closing request to his fellow Sweden Democrats he called for action to ensure that the Church of Sweden ceases to use the congregation's money to propagate for mass immigration, which he claimed to "tear society apart, make it colder and contribute to segregation." Karlsson argued that dialogue between the Church of Sweden and Islam was possible, yet argued that the church rather was engaged in "submission" to Islam at present.

In a subsequent interview with Expressen, Karlsson specifically stressed that he had said "almost comparable," as the persecution of Jews by Nazi Germany had no parallels in human history. Nevertheless, he argued that parts of the Quran that call for killing, crucifying and slaughtering the Christians and other "infidels," which, in Karlsson's opinion, instigated a genocide of Christians.

© CC0 / jubild
Church of Sweden Caught Sheltering Illegal Migrants Amid Projected Influx
The Church of Sweden has been in recent years actively involved in various interfaith projects and has been accused of promoting a bizarre hybrid of "Chrislam." Incidentally, German-born Antje Jackelén, Sweden's first female Archbishop, chose "God is Greater" as her motto, which somewhat ironically echoes of Allahu Akbar, the well-known Muslim expression of faith. The same year, the Bishop of Stockholm Eva Brunne infamously suggested removing crosses from the Seamen's Church in order to accommodate Muslim believers.

This past Christmas, the Church of Sweden launched a petition advocating for a more humane asylum policy, which in real life could mean a return to the peak figures of 2015, when Sweden took in thousands of asylum seekers on a daily basis.

In February 2017, Karlsson raised a storm in Sweden by penning an open letter to the Wall Street Journal along with Sweden Democrat leader Jimmie Akesson confirming President Donald Trump's assertions that Sweden was undergoing a Muslim immigrant-led crime crisis. In the letter, Karlsson and Åkesson stated claimed that Trump not only did not exaggerate Sweden's problems, but "if anything, understated them."

After making their debut in parliament in 2010, the Sweden Democrats have continued to grow, despite their rivals' coordinated efforts to raise a "cordon sanitaire" by isolating the "troublemakers" with a cross-party alliance.

© AFP 2021 / JONATHAN NACKSTRAND
Disgruntled Swedes Drift to the Right to Protest Migration
Despite relentless efforts by Swedish politicians and the media to portray the SD as Nazis, about 14 percent of SD members are of immigrant origin, which roughly corresponds to the proportion of foreign-born residents in Sweden.

"Whether it will be I or someone else remains to be seen," Jimmie Åkesson told the Swedish newspaper Aftonbladet earlier this week.