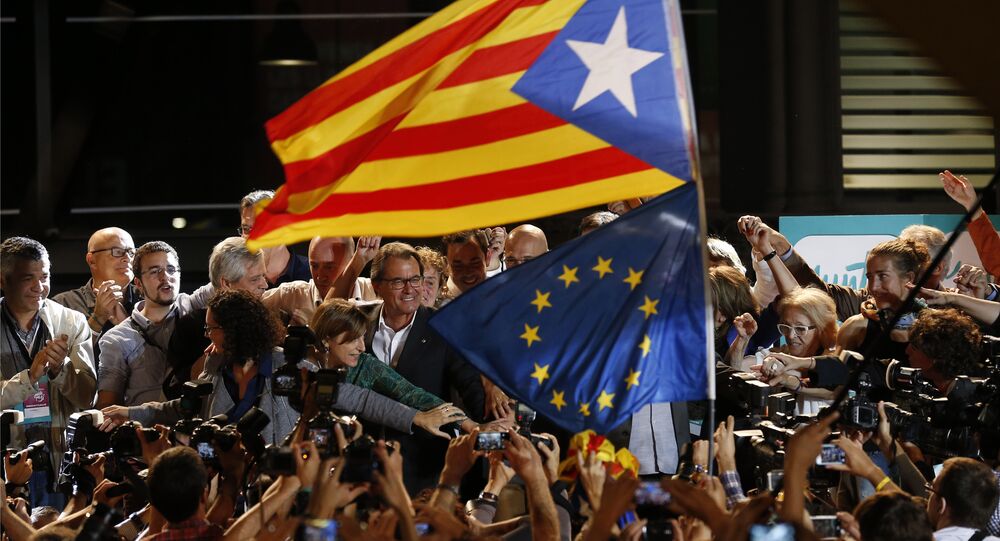 Catalan government on Thursday accused the Spanish authorities of waging a "convert siege" against the Catalonia.

MOSCOW (Sputnik) — Catalan government spokesman Jordi Turull on Thursday accused the Spanish authorities of waging a "convert siege" against the autonomous region after the Catalan parliament passed a bill on holding an independence referendum.

"We have to defend our fundamental rights, human rights, such as freedom of expression or right to political initiative, in a convert state of siege," Turull said, as quoted by the Vanguardia newspaper.

© AP Photo / Francisco Seco
Spain May Lose $2.9 Bln in Taxes if Catalonia Gains Independence - Reports
Spanish Socialist Workers' Party (PSOE), the biggest opposition party, proposed to settle the "Catalan issue" in the Congress. The party submitted a relevant proposal to the commission on Catalonia, urging for open dialogue. The PSOE believes that the government should introduce amendments to the constitution to make Spain a federal state.

"Federalism is by definition a pact. We consider that it is necessary to move from the current disagreement to a fair and open dialogue and exchange of ideas in which all parties are represented," the document read.

Catalonia has been seeking independence from Spain for years. On November 9, 2014, about 80 percent of the Catalans who took part in a non-binding referendum on the region's status as part of Spain voted in favor of Catalonia becoming an independent state. However, the independence vote was ruled unconstitutional by Madrid.